ORANGUTANS AND THEIR INTELLIGENCE 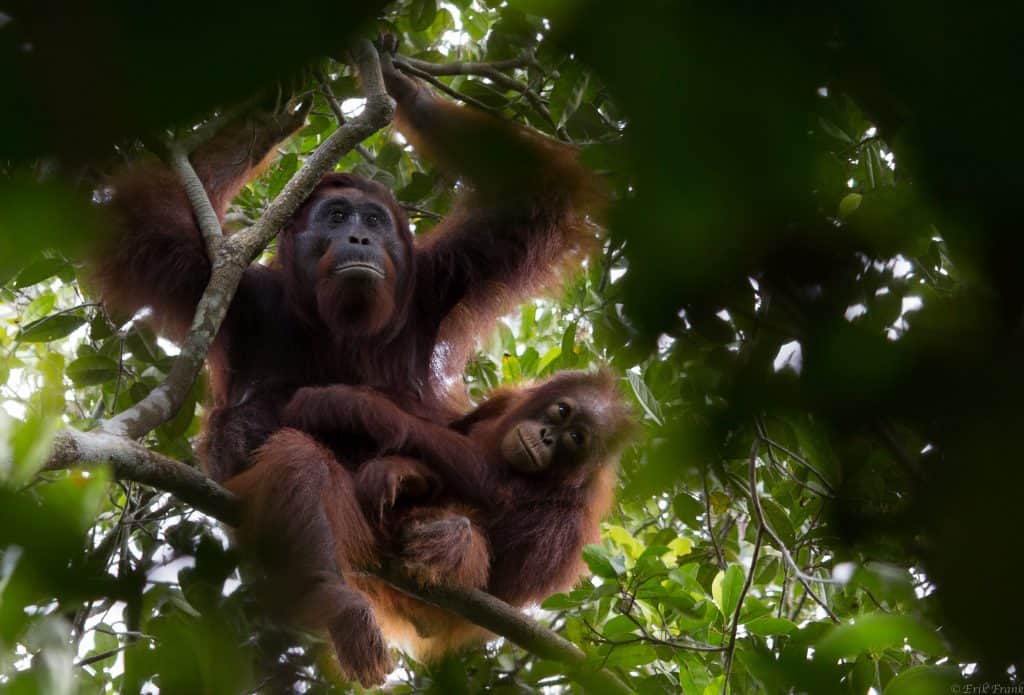 Orangutan is an exotic primate that always attracts the world’s attention. The species was first described scientifically in 1758 by Carl Linnaeus. They are the only great apes living in Asia. Currently, there are 3 species of orangutans that can only be found on the islands of Sumatra and Kalimantan. All three are classified as critical or critical by the International Union for Conservation of Nature (IUCN) Red List.

The physical appearance of female and male orangutans is very easy to recognize because they have significant differences in body size and shape.

The red-brown hair of an orangutan is very iconic and well known to the monkey group. Orangutans have fairly long arms, short legs, and very flexible hips, making it easier to move from one tree to another. Orangutans can hold tightly to twigs because they have four long fingers and one thumb similar to humans.

Based on the results of the 2016 Orangutan Population and Habitat Viability Assessments (PHVA), it is predicted that there are around 71,820 orangutans left in Sumatra and Borneo (Kalimantan, Sabah and Serawak), and only 38% are predicted to continue to survive for another 100-500 years. There were around 14,470 individual orangutans in Sumatra recorded in the 2016 PHVA, including the Tapanuli orangutan (in the Batang Toru landscape: around 577-760 individuals) which at that time had not been identified as a distinct species. The largest population is in Kalimantan, which reaches around 57,350 orangutans.

The largest mammals that live in trees are orangutans. Known as the only arboreal great ape, orangutans spend about 80% of their day in the trees.

Predators that have the potential to pose a threat to orangutans are tigers, clouded leopards and wild dogs.

Orangutans can use tools for foraging: crushing nuts and insects. There is also photographic evidence showing orangutans using wooden sticks to catch fish.

They can use the leaves to increase the volume of their voice when communicating (while kissing). The use of this tool is cultural and varies between orangutan populations depending on the level of social contact that exists between individuals.

Recent research conducted by the Borneo Nature Foundation (BNF) research team has proven that orangutans are intelligent in using plants as pain relievers, namely Dracaena cantleyi. Female orangutans in the Sebangau National Park have been observed several times chewing these leaves into foam which is then applied to certain body parts.

Interestingly, the Dracaena cantleyi plant has long been used by the Dayak people to relieve body aches and is known as tewukak in the Dayak Ngaju language. It is not known for sure whether the Dayak people learned this treatment from orangutans in the past. The video of the use of tewukak by orangutans was immortalized in the documentary film BBC Series: ‘Earth’s Tropical Islands’, which was broadcast in the UK on January 2, 2020.

Several researchers affiliated with UPT LLG CIMTROP Palangka Raya University and BNF in the latest publication in 2019 showed that orangutans use sign language as a way of communicating. This communication skill is passed from the mother orangutan to her baby during the eight years of care. Observation and documentation of orangutan communication were carried out for two years in the Sebangau National Park.

From the results of video observations that last more than 600 hours, it was found that orangutans are very responsive to communication. They react well before the cue ends or in less than a second in 90% of communication (this does not apply to individuals who are not paying attention to the communication). Cues used include calling, stamping, pushing down on the lower lip, shaking objects, and “showing” body parts, which are sometimes accompanied by vocalizations.

“We observed orangutans using sound and gestures to achieve eight different ‘goals’. Something they want other orangutans to do,” said University of Exeter scientist Dr. Helen Morrogh-Bernard, Director of Research of BNF International.

The eight identified communication “goals” were: “acquire the object” (signal want something), “climb me”, “climb you”, “climb”, “get away”, “change the game: lower the intensity”, “continue playing” and “cut it out”.

Orangutans have an important role in the sustainability of Indonesia’s forests. They are one of the primates who contribute greatly to the distribution of seeds from forage fruits in the forest every day. This also makes orangutan rescue campaigns quite intensively carried out by various organizations. The uniqueness and intelligence of orangutans are the main attraction for foreign tourists to visit Indonesia. Therefore, we need to participate in preserving their survival.