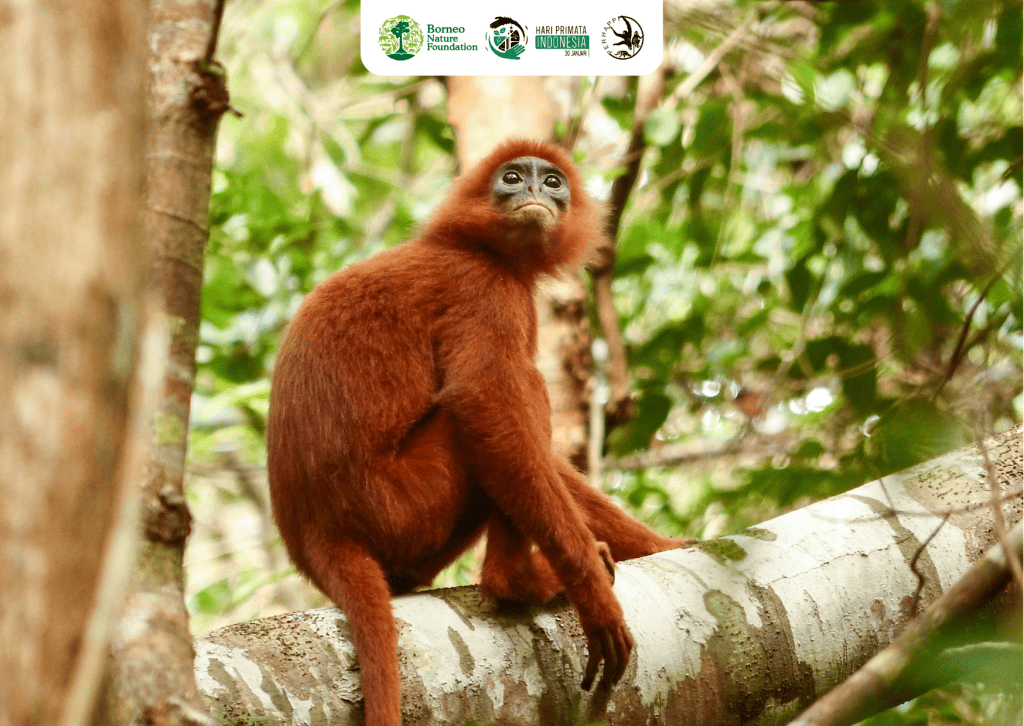 DISCOVER MORE ABOUT ONE OF BORNEO’S MOST CHARMING, YET UNDERAPPRECIATED, PRIMATES

It was early morning and temperatures were low at the Peat Forest Natural Laboratory (LAHG) camp, a special zone within the Sebangau National Park. As I shivered fitfully in my tent, distant sounds of screaming and whistling pricked at my eardrums, stirring me from sleep. The sound belonged to a chorus of gibbons and red langurs, the latter of which are known by the local Dayak people as kelasi.

At precisely 05:00 am, I set off down a mossy wooden path into the forest. I was not alone, but accompanying Supian, Fahrudin (also known as Uji) as part of the observation team. After walking for 15 minutes, we arrived at some trees inhabited by a group of kelasi, who were to be our observation targets for the morning.

This kelasi group was Group C. It was still dark, but some of the monkeys were up and alert, snacking on leaf shoots and playing, while others sprawled half-asleep on their branches. Supian cracked open a thermos flask filled with coffee and swigged it appreciatively, savoring the warmth on this chilly morning.

Kelasi belong to the surili, or leaf monkeys (those in the genus Presbytis), long-tailed primates found on the Thai-Malay Peninsula, Borneo, Sumatra, and Java. Kelasi (Latin name Presbytis rubicunda), however, are endemic to the island of Borneo, meaning they live nowhere else on Earth. In Central Kalimantan, this ruby-hued species can be seen in the peat swamp forests of Sebangau National Park, from where I stood observing Group C.

Kelasi infants are born with snow-white fur, which begins to turn a vibrant reddish orange when they reach adolescence. This process starts from the tail and radiates upwards, so younger individuals look can pretty funny sporting a bright orange tail on a white body. Many species have an ‘awkward teenager’ phase, and it seems kelasi are no exception! The colour then spreads up across their back to the rest of their body, with a full orange coat signifying adulthood.

According to Dr Susan Cheyne, one of the Borneo Nature Foundation’s leading science experts and an IUCN Red List assessor for kelasi, the species is currently Vulnerable (VU) to extinction.

“This status is one of three main threatened categories, which include “Endangered” and “Critically Endangered”. The status of kelasi was officially revised from Near Threatened (less at-risk but still of concern) to Vulnerable in 2016 after the devastating 2015 fires in Kalimantan.

In conversation, Dr Cheyne explained that we currently lack robust population estimates for red langurs across Kalimantan, although we have good density data for Sebangau National Park.

“Kelasi can only be found on the island of Borneo, which means they are an endemic species. These monkeys are hunted for the illegal pet trade, as well as suffering population declines due to habitat loss. The preservation of all wildlife is important to maintain a productive ecosystem,” she stated.

BNF Kelasi Coordinator, Supian, who has worked at BNF for 12 years, tells me that he always sees the monkeysgrouped together in small numbers to deter predators.

“Once my team and I were observing a group of kelasi when they started to make alarm calls, jumping around and raising an enormous racket. It dawned on me then, in a medium-sized tree not far from the group lurked a clouded leopard, Borneo’s most formidable predator.”

Supian continues, “they were making more and more commotion, breaking tree branches to chase away the clouded leopard. Eventually the big cat slunk away and the fierce noise of the kelasi died down.”

“This illustrates how important it is for kelasi to live in a group, so they can take care of each other and collectively drive off predators,” he notes.

Falling in Love with Langurs

Supian recounts that he first joined the Orangutan Tropical Peatland Project (OUTROP, which would later become BNF) in 2010. During his first two years he helped David, a British researcher, conduct research on kelasi in Sebangau National Park.

“I heard the sound of people laughing in the middle of the forest and I just knew it was kelasi. From then on, I started to get more and more interested in learning about the kelasi, and it was through them that I came to love working in the forest,” he says, laughing heartily like his favorite animal.

For Supian, the most touching moment was seeing a kelasi infant crying over the death of its mother, when another female in the group picked up the infant and carried it like her own child.

“I used to think that only humans cried when their mother left them, but it turns out that even animals like kelasi can feel sad and lost,” he says, the emotion plain on his face as he recalls the incident several years ago.

According to Supian, after 12 years observing kelasi he has the name and identifying characteristics of each individual committed to memory. And, he smiles, it’s not uncommon for him to observe strange and silly behavior while the kelasi play and chow down on forest fruit.

“I once saw a kelasi fall out of a tree after his play session got a little too intense. He just sat there on the ground for a moment, looking left and right with the most confused expression on his face. His palpable bemusement made me laugh out loud! Another time I had a kelasi throw a mangosteen at me, almost as though he wanted to share the fruit.”

Supian comments that he often shares stories about the kelasi with his friends and family because he wants them to understand how special and charismatic these monkeys are, and how integral their existence is to the entire Sebangau peat swamp ecosystem.

“I hope that the kelasi population will grow and can be sustainably maintained. The more we protect the forest, the healthier a home it provides for wildlife. I hope that one day my grandchildren will be fortunate enough to see kelasi in the wild, just like I have,” he resolves.