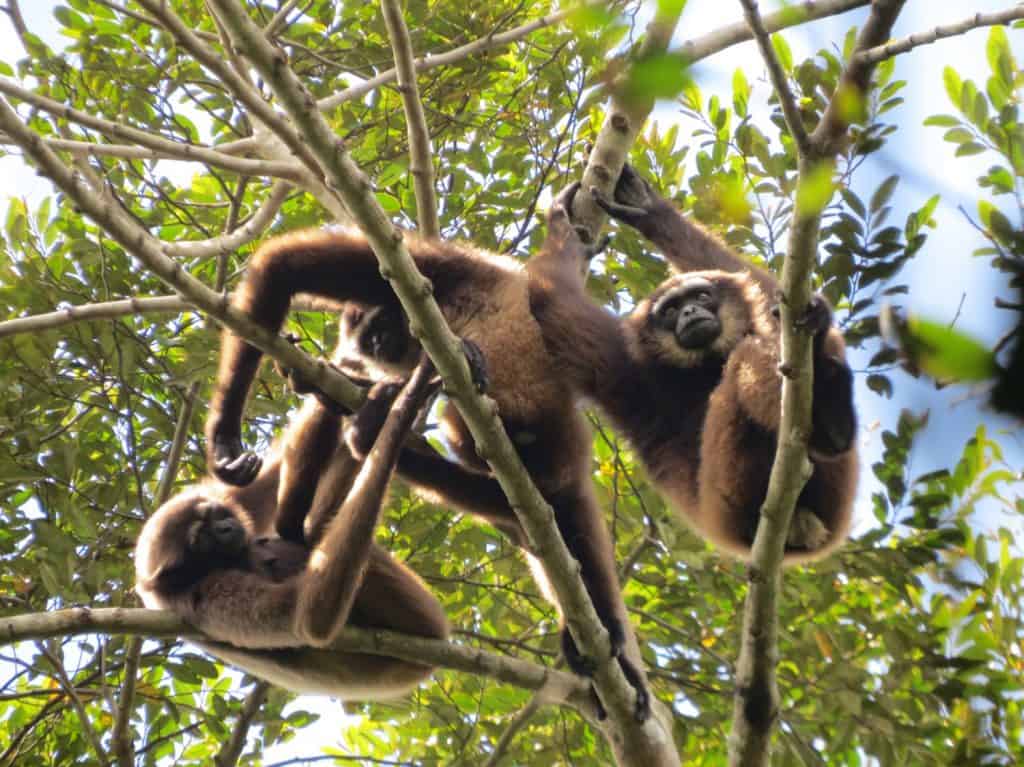 Once upon a time in the green depths of Sabangau Forest lived a family of gibbons, collectively known as Group C. The group comprised of Captain the adult male, Chilli his adolescent daughter, and Comel (pronounced “Cho- Mel”) another adult female. Chilli is known well to BNF researchers and avid blog readers (see Chilli and Friends) yet on this particular date an exciting, rarely-seen behaviour by her entire group, led by Captain, was witnessed and captured on camera.

Amongst the verdant canopy where the gibbons usually brachiate and swing, alarm calls were heard by the focal gibbon, Comel. This was swiftly followed by more alarm calls by the mischievous Chilli. Thus, creating a cacophony of noise, that filled the treetops.

Meanwhile Captain, the adult male, sprang into action, so eager to get a piece of the action he overshot his fellow gibbons and had to perform a U-turn to his former position, then succeeded in joining his companions and proceeded to shake the tree then take a swing back almost as if he was antagonising something, retreating to safety, then repeating the motions of tree shaking and retreating. This continued for over an hour when the observers noticed that there was a gold-ringed cat snake (Boiga dendrophila) also in the tree. This snake, that has suspected toxic saliva, whilst belonging to a family of otherwise non-venomous snakes (Das, 2011), was seen slithering its black and gold limbless body down off the branch, across and away into the nearby trees, not to be seen again.

The parade of gibbons were so jubilant in their success of predator mobbing a snake to vacate the vicinity, a loud and proud great call echoed once more across the leaves. Comel had signified victory with her great call, often heard by those winning an interaction, either within or between species.

Whilst out on a follow, my very first in fact, we were following Chilli when at 14.10 just after eating some terontang fruit, we observed the similar to and fro tree shaking behaviour that was previously witnessed in the account above. Unsure at first what she was up to, we searched the treetops for other life forms and we could see a Bornean keeled pit viper (Tropidolaemus subannulatus) lounging in the tree slightly higher than Chilli herself.

The snake was small, yet with an enlarged stomach, suggesting that it had recently eaten and was now resting in the tree. Chilli was extremely interested in this snake and was mobbing it for a minute or so until she sped off after an orangutan came nearby.

It is not clear whether this behaviour to mob a snake was learnt from her father or just her precocious curiosity, yet it was an exciting sight to behold.

Das, I. 2011. A Photographic Guide to Snakes and Other Reptiles of Borneo. 2nd Edition. New Holland Publishers.