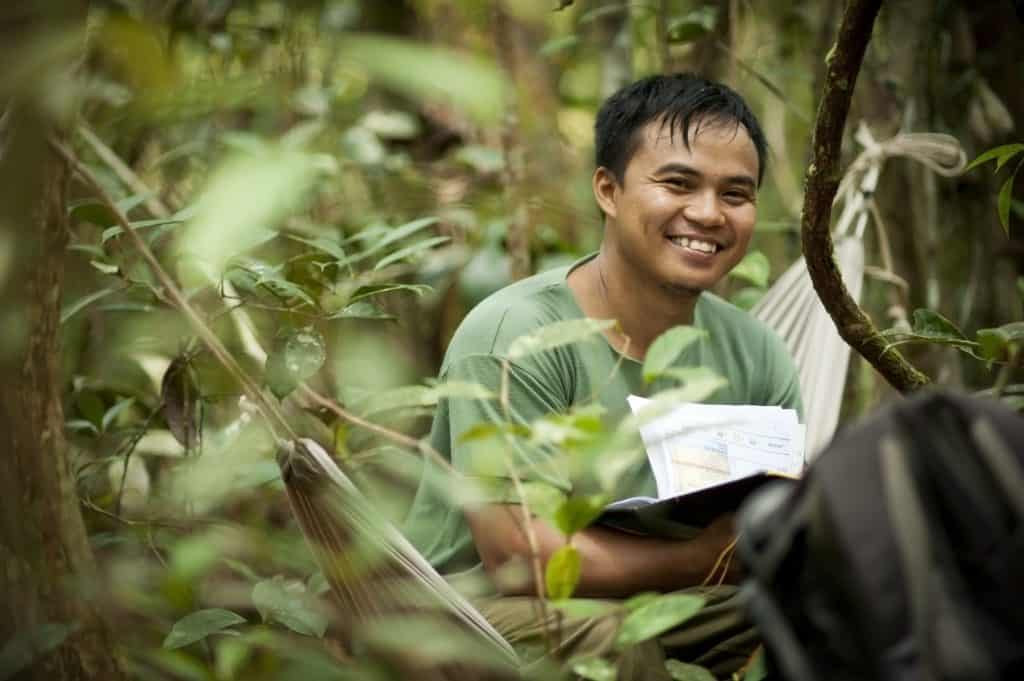 So, we will talk about the self-medicating orangutans that were featured in the BBC Earth’s Tropical Islands Borneo episode. Can you tell me when the BBC came to Borneo to film for the new documentary series?
The film crew came to the Natural Laboratory of Peat-swamp Forest (LAHG), a special zone within the Sebangau National Park, BNF’s main research site, in October 2018. They came to make a documentary with me and Santi, another of BNF’s Field Staff. The crew followed us in the forest for 4 days to film our research activities, carry out interviews and, of course, film wild orangutans.

Is it your first time being filmed on TV?
Yes, it is the first time. It is very exciting that it is with the BBC and the documentary has already been broadcast in the UK and will be aired in the US later in the year.

How do you feel about it?
I’m really proud to be part of this documentary and talk about our orangutan research in Sebangau. It was one of the most exciting experiences to happen to me since I started working with BNF in 2004.

What is the main story that was filmed by the BBC?
They were interested in our research about self-medication behaviour in wild orangutans using the plant Dracaena Cantley, which works as an anti-inflammatory. BNF published this research in 2017 and the BBC thought it was a fascinating discovery so they wanted to feature it in the new TV series on BBC2 called Earth’s Tropical Islands.

Can you tell me about this self-medication behaviour in orangutans? How many times have you seen it?
I have seen this behaviour several times when observing wild orangutans in LAHG, Sebangau National Park. Usually, the plant is used by adult female orangutans who might have pain in their arms from carrying the youngsters. I have observed Indah and Indy (two female orangutans) use the leaf as an anti-inflammatory. They took the leaves of Draceana Cantleyi then chewed it into a foamy mixture. After that, they rubbed the paste onto specific parts of the body where they might have felt pain or are achy.

I heard that the Indigenous people of Borneo (Dayaks) use the same plant for traditional medicine. Is it true?
Yes, it is. Dayak people call it Tewukak because the trunk looks like sugar cane (Indonesian name: Tebu), but the leaves are very different. A long-time ago, before modern medicine was available, Dayak people used it for pain or swollen body parts. The leaves were mashed or burned first then mashed, and they rubbed it on to the body. But, we don’t know who discovered it first: orangutans or people!

Are Dayak people still using it?
There are some people that still use Draceana Cantleyi plant as traditional medicine, but many people now go to the doctor and use more modern medications.

What do you hope from this research?
I’m happy to know that orangutans are using the same plant as Dayak people for anti-inflammatory medicine. I believe that Tewukak needs to be preserved as traditional medicine and I hope modern Dayak people will remember and use it once again.

For further information and to watch clips from the series, check out the Earth’s Tropical Islands website. You can also learn more about self-medication in wild orangutans here.

PrevPreviousSebangau Camp – ‘Get outta my swamp!’
NextMeet Eka: A Scientist Who Became a Game Character!Next