Examining the Source of Fire 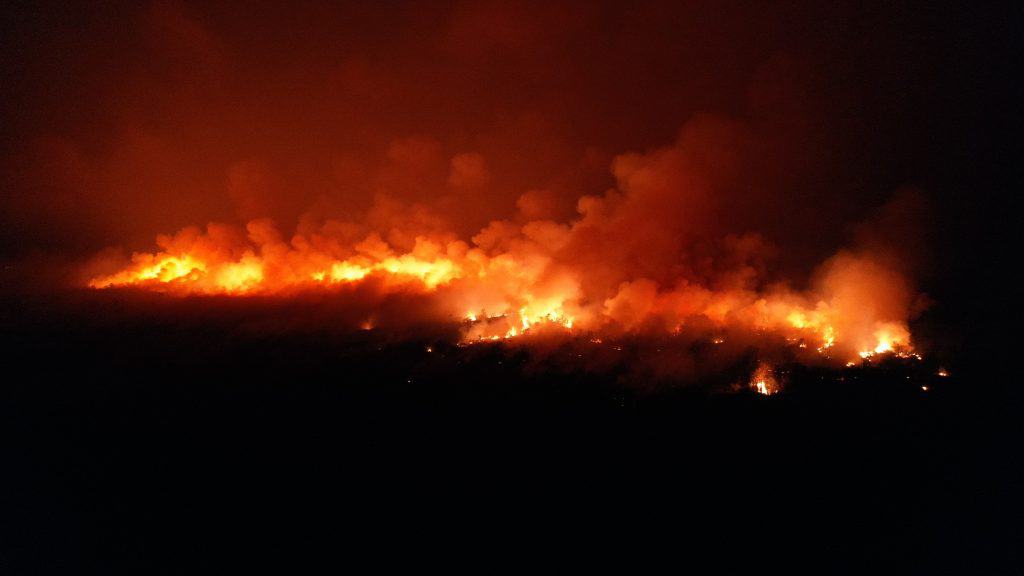 Central Kalimantan is a real portrait of the characteristics and vulnerability of forest and land fires in Indonesia. With the arrival of each dry season, thousands of hectares of forests and land burn at an increasingly large scale and impact. Various countermeasures have been taken, various research and innovations have been produced, however, disasters keep repeating themselves.

Based on the findings of the Yayasan Madani Berkelanjutan published in May 2020, C. Kalimantan is also listed as one of the five provinces that need to provide special attention to forest and land fire prevention because it has the largest of ​​fire-prone area (ART) of 12.8 million ha. The other four provinces that are considered to have high ART are West Kalimantan with an area of ​​11.2 million ha, Papua constituting ​​10.8 million, East Kalimantan of ​​9.5 million ha, and ​​8.6 ha in South Sumatra. The characteristics of peatlands, weather patterns, and the high potential land-use conflicts for social, economic, and business interests are a few factors that determine the extent of ARTs.

Karhutla 2019 also caused enormous economic losses. Among the affected provinces, C. Kalimantan suffered the most, with the largest loss of all provinces in Indonesia, of around IDR 11.4 trillion (US $ 820 million) or 7.9 percent of its regional GDP. These losses have long-term effects that tend to persist in the form of reduced consumption and lower levels of investment. Karhutla in C. Kalimantan has also resulted in thousands of people experiencing respiratory problems, not to mention the social and economic impacts directly faced by locals. Furthermore, ecologically, forest and land fires also destroy habitats and biodiversity in forest areas and contribute to tons of carbon emissions stored in the peat domes in the province, which are some of the largest carbon reserves on the planet.

In its publication entitled Indonesia Economic Quarterly Reports (IEQ), the World Bank said that, unlike boreal forest fires in North America, land and forest fires in Indonesia, as in C. Kalimantan, are anthropogenically initiated and has become a chronic problem since 1997. Burning is considered as one of the cheapest options for preparing land for cultivation or for claiming land in disputed areas, where land tenure is uncertain and law enforcement is weak.

This is met with the fact that tropical rainforests in Indonesia often face dry weather over periods of time, along with the impacts of climate change. Without a well-coordinated control and prevention plan of forest and land fires in the early stages, the fire burns easily and quickly.

Head of Borneo Nature Foundation Indonesia, Juliarta B. Ottay, said that apart from human influences, factors such as the neglect of water management commitments set to maintain the water level in accordance with tolerance limits, and the characteristics of land in C. Kalimantan constituting 19% peat, cannot be ignored as factors that play a key role in influencing forest and land fires in C. Kalimantan in the dry season.

“Peat has characteristics that are very flammable. With these characteristics, combined with intentional or unintentional burning by humans and the dry season, forest fires can easily occur in C. Kalimantan or across the island in general,” said Juliarta.

“The area of ​​C. Kalimantan is 1.2 times the island of Java, of which one-fifth is peat. It’s not easy to supervise and monitor it,” said Merti.

Unlike on mineral soils, fires in peat forests are more difficult to extinguish once they begin to burn and these fires release thick haze and carbon into the atmosphere. The composition of peatlands contributes to the fact that carbon emissions from forest and land fires in 2019 in Indonesia were estimated to be almost double that of the forest fires in the Amazon, Brazil in the same year (World Bank, 2019).

Although peatlands burn easily, they cannot burn by themselves. Professor of the Faculty of Forestry, Bogor Agricultural Institute, Bambang Hero Saharjo, said that he often monitors hotspots from satellites, and it turns out that many fires are found in relatively the same locations from year to year, including in concession areas owned by corporations. That, according to him, means that corporations have been neglected in their concession areas (Tempo.co, August 15, 2019).

The indications conveyed by Bambang are in line with the data compiled by the Yayasan Madani Berkelanjutan, published in May 2020. According to this agency, the majority of forest and land fires in 2019 (54.88%) occurred in forest areas. Fires in forest areas were dominated by fires in production forests (permanent, limited, conversion) which had an area of ​​61.5%. However, conservation and protected forest areas were still experiencing fires, namely 25.2% and 13.3%, respectively. The majority of fires in production forests (58.97%) occurred in areas that had been granted large-scale permits or concessions, namely oil palm plantations, industrial plantation forests-IUPHHK HT, and logging-IUPHHK HA. Among the three types of permits or concessions, the largest fires occurred in industrial plantation forest permit areas (51.57%). These data indicate that corporations holding concessions also need to be more seriously involved in fire prevention efforts.

Head of the Technical Implementation Unit (UPT) of the Peatlands Laboratory (LLG), Center for International Cooperation on Sustainable Management of Tropical Peatlands (CIMTROP), Darmae ​​Nasir, revealed that the issue of forest fires is actually a part of a human dilemma in the present times, i.e. environmental conservation vis-à-vis economic development. Fires usually start with open or closed land use and ownership conflicts.

“For example, the government designates a forest as a conservation area, but many people lose their source of livelihood as they are restricted from entering these areas. The result of which is generally conflict and force people to burn surrounding areas to clear forests for agricultural purposes as an alternative livelihood,” said Darmae.

He added that ideally conservation and economic needs should go together. The conservation area should also provide livelihood opportunities for local communities.

The distribution of the road infrastructure network is also suspected to have influenced the expansion of forest and land fires in C. Kalimantan. Based on the road infrastructure map in the province, new road networks are seen in the southern regions, where several fire hotspots have been observed in recent years, such as Pulang Pisau, Sampit, Kapuas, and Palangka Raya (see image of road network map and forest fires in C. Kalimantan).

In contrast, in the northern regions, around the Heart of Borneo (HoB) area, road network development appears to be much less. At the same time, the area is relatively green and protected from fires. The minimal number of roads and population allows this area to be relatively protected from fire and exploitation.

“Talking about forests in C. Kalimantan is talking about HoB. That’s where the real forests remain. To protect it, we shouldn’t build too many roads. If it happens, the forests will rapidly deplete and consequently burn, after which, there won’t be any point in talking about conservation,” said Darmae.

Development should not always be identified with infrastructure and road network development. It is necessary to find alternative modes of transportation to avoid the destruction of forests. River transportation is probably a better choice for this island, especially for areas around forests, in order to prevent fires and forest loss.

This means that solving the forest and land fire problem cannot stand alone. There must be integration with regional development strategies as well as national development. If not, maybe in a century the forests in Kalimantan will find the point of extinction.