Borneo is burning again and again, but why? 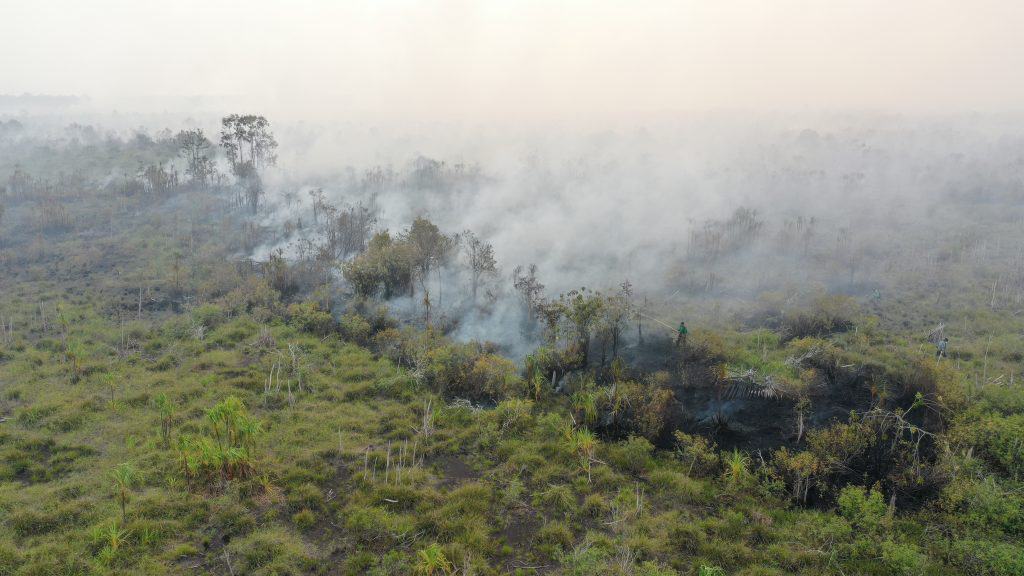 For over a month, forest and land fires have been burning in Central Kalimantan, Indonesian Borneo. These fires have been an annual occurrence during Borneo’s dry season for over 20 years.

Many of you may ask “Why are these fires burning every year?”

The tropical peatlands of southern Borneo form one of the largest expanses of tropical rainforest in Asia, with the largest known populations of the Critically Endangered orangutan amongst a wealth of biodiversity.

Human activities on peatlands typically involve peat drainage through man-made canals. This is usually done in an attempt to make the land more suitable for agriculture or habitation, but also for loggers to transport timber from inside the forest to processing points on rivers.

The worst example is the failed Mega Rice Project of the mid-1990s, which aimed to drain 1 million hectares of peatland in Central Kalimantan and convert it to rice production. The area now suffers from extensive fires each year, representing a true ecological catastrophe.

The problem is that, like coal, dry peat is highly flammable. This means that fire can easily take hold in areas of drained peatland and, once started, fires are incredibly difficult to extinguish as they burn underground.

While some fires are started accidentally by discarded cigarettes, for example, studies suggest that the huge majority are started on purpose. Big industry is frequently blamed by both media and politicians, and not without reason: studies have shown that companies use fire to clear land cheaply and easily, and as a weapon of sorts to increase their potential to obtain use of land. There are some signs of optimism with most of the larger companies now making zero-deforestation pledges and signing up to sustainable production standards, such as the RSPO, and the Indonesian government cracking down on companies that burn land illegally.

Some studies (see here and here) even indicate that more fires may actually be started by smallholders than large companies. Smallholders use fire for essentially the same reasons as large companies – to clear, gain access to and/or increase the value of land – but the issue is likely to prove more challenging to overcome in smallholders. Large companies can more easily develop, implement, coordinate and police fire prevention policies, and have better access to resources to do this. Compare this to the situation with many thousands of small landholders, with no centralised organisation and extremely limited resources (many smallholders are incredibly poor). The challenge is great but urgent.

Drainage of peatlands is the root cause of the current fire crisis in Indonesia, as this removes the natural protection from fire that intact peatlands receive.  Drought does, however, play an important role in determining the level of fire risk in a particular year, like this year.

Right now, the Community Patrol Team and Community Firefighting Teams (MPA) are fighting on the frontline to stop fires that are spreading into the Sebangau National Park peat-swamp forest; home to an array of endangered and native species. The firefighting teams need your support to tackle these flames. They need fuel, food and daily income for their families, so they are always ready to extinguish any fire that arises, and they need the latest technology, best equipment and proper safety gear so they can quickly locate, map and tackle new fires.

PrevPreviousBuilding dams to stop fires in the Sebangau National Park
NextThe fires still burn, I can feel the heat even in my dreamsNext