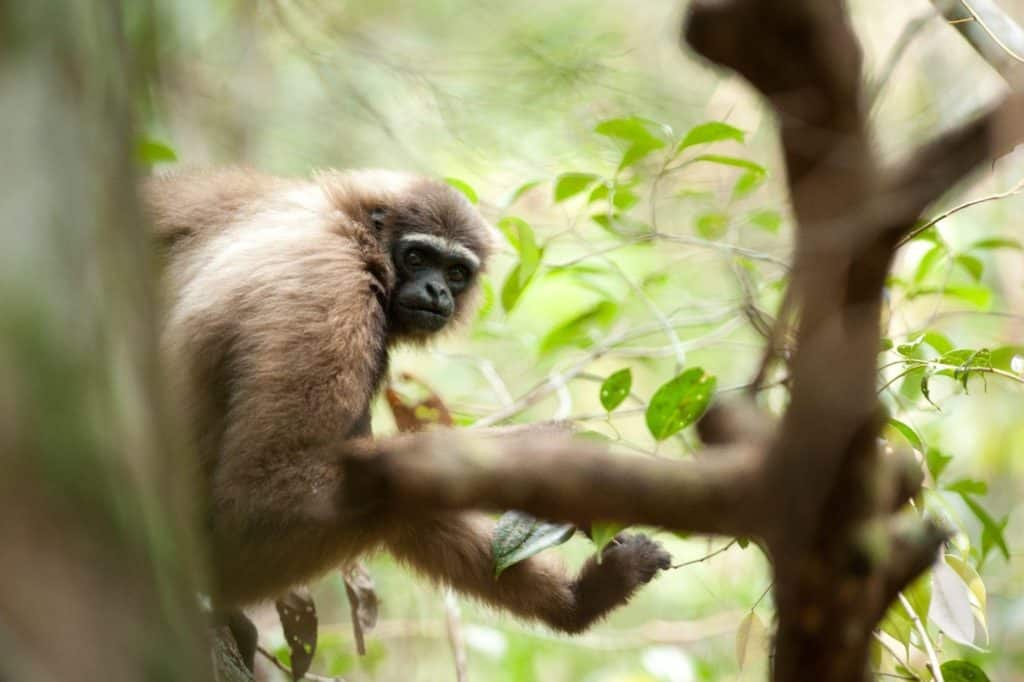 October 24 marks World Gibbon Day 2021, an international celebration of these smaller – but by no means less important – apes.

The Jungle Book’s King Louie might be the self-proclaimed ‘King of the Swingers’, but gibbons are the real rulers of the canopy. These lanky primates have elongated hands and feet, in addition to their characteristically long arms, which they use to grasp branches as they move through the treetops at high-speed.

The fastest non-flying arboreal mammals, gibbons can reach speeds of 35mph, and up to 200ft above the forest floor. To put that into perspective, Usain Bolt’s record-breaking sprint clocked in at just 23mph.

Gibbons are highly territorial and defend their home ranges through calls. These calls are amplified by a specialised throat-sac, travelling for miles through dense jungle to alert neighbouring groups to their presence. Gibbons are among a handful of primates that can sing, even forming duets with partner individuals. These small apes live in family units, consisting of a monogamous pair and their dependent offspring. Social bonds are reinforced through song and grooming between family members.

Gibbons’ mesmerising whoops used to be a hallmark of thriving forest habitats across Southeast Asia; however, these forests are falling silent. The vast majority of gibbon species are Critically Endangered or Endangered, making them one of the most threatened primate groups, in large part due to deforestation and poaching for the illegal pet trade. While population declines paint a dire portrait for the gibbons’ future, many conservationists have dedicated their careers and, indeed, their lives to the protection of these species.

The Borneo Nature Foundation (BNF) is a not-for-profit conservation and research organisation, which has been operating in Indonesian Borneo for 20 years. BNF partners with local stakeholders to implement landscape conservation strategies based on rigorous scientific research, and supports communities to develop sustainable livelihoods that complement environmental protections. Among BNF’s conservation research projects is the Gibbon Research Project (GRP), established in 2005 by Co-Director Dr Susan Cheyne, representing the longest-running continuous study of these rare primates. Over the project’s 16-year span, research teams have studied seven groups of wild Bornean southern gibbons (Hylobates albibarbis) in Sebangau National Park, Central Kalimantan, and continue to gather data on three of them.

Due to the speed at which they travel through the forest canopy and difficulties in habituation, gibbons make for challenging research subjects. However, more than 9,885 hours spent studying these animals in the field have yielded some fascinating insights into gibbon population size and distribution, social behaviour and diet. BNF’s outputs include identifying the effects of changing climatic conditions and forest fire smoke on singing behaviour, and establishing the key factors influencing gibbon population density through habitat surveys across 16 sites in Kalimantan. BNF scientists also compare gibbon behaviour, diet and nutrient intake with those of sympatric primate species, such as Bornean orangutans and red langur monkeys, and evaluate the long-term impacts of disturbance.

This kind of scientific research is vital to developing effective conservation strategies. For example, having a thorough understanding of gibbon feeding ecology allows us to maximise protections for the fruiting trees most important to their continued survival. In Sebangau National Park, BNF’s long-term landscape, there are an estimated 30,000 Bornean southern gibbons. While this number might sound encouraging, the species is categorised as Endangered by the IUCN Red List and many threats to its habitat persist beyond the protected bounds of the National Park.

This article has been posted on https://earth.org/world-gibbon-day-2021-saving-the-critically-endangered-gibbons/ on 22nd October 2021