Young Guardian of the Village Forest 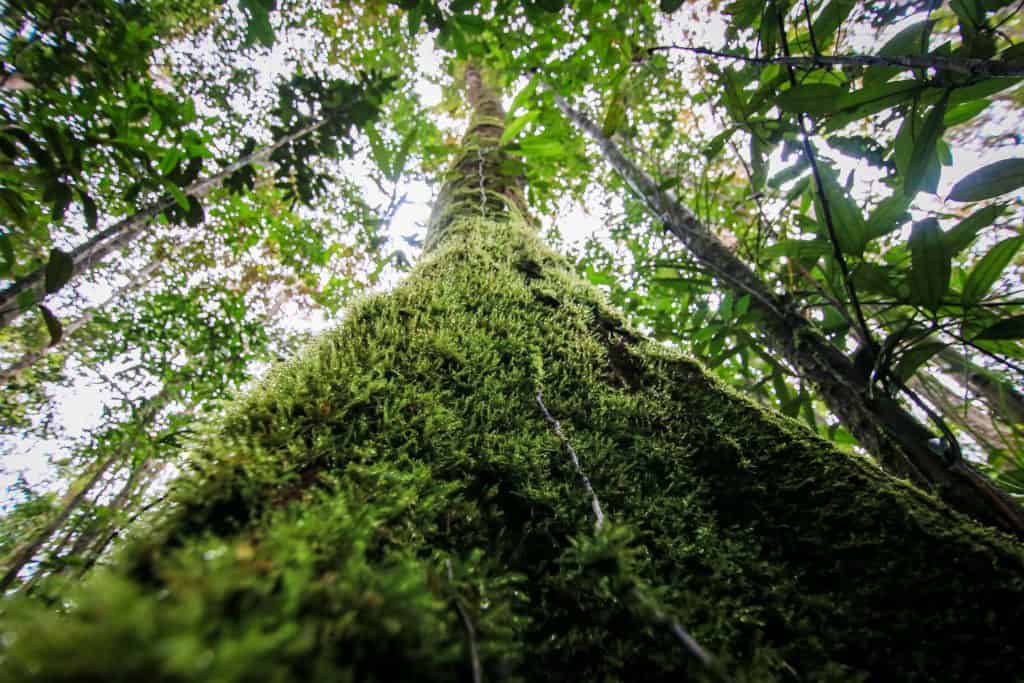 It was already 10 am when the Parahangan Village Forest Potential Survey Team, Kahayan Tengah Subdistrict, arrived at Kahayan River dock in Parahangan Village. The team was comprised of 29 people from the Village Forest Management Board (LPHD) Parahangan, the Production Forest Management Unit (KPHP) Kahayan Tengah, Herpert Experts at the University of Palangka Raya (UPR), and the Borneo Nature Foundation (BNF) Indonesia.

We boarded a large, motorized boat down the murky Kahayan River. Area residents refer to this large engine ship as a ferry. An hour later, we arrived at the destination pier, a short distance from the nearby oil palm plantation.

Our journey along this final stretch took place via truck, sent by one of the palm oil companies. The land route leading up to our final location was far from easy; the muddy dirt road was pocked with holes and proved challengingly slippery. Beyond the road, an expanse of young palm trees dominates the landscape.

After another 30 minutes, we arrived at our destination. Male members of the team set up a rest tent and went about preparing logistics, while female team members began putting up kitchen tents and organizing cooking utensils.

Mila, Secretary of the Youth Organization, who participated in our survey, said that, at first, she was reluctant to take part given the difficult forest terrain, absence of any cell phone signal and the prevalence of mosquito bites. Nevertheless, the 24-year-old girl changed her mind after realizing how important this survey was for the future of her village and its forest.

“I participated in these activities with five of my female friends, including Mrs. Rokhidayah, who always encouraged me to be active. I also want to gain experience and learn more about village forest management, especially in my village,” Mila said.

“Knowledge of the importance of conserving village forests must be disseminated and understood by young people. We, as the younger generation, must protect our land and forests from being damaged,” Mila explained.

Mila is not the only young person involved in village forest development activities. 13 members of the Parahanangan Youth Organization, six of whom are women, took part in the survey.

Mila revealed that she and her colleagues from the Youth Organization wanted to learn more about village forests by recording the potential that exists in their own, surveying both flora and fauna. During the survey, Mila saw many orangutan (Pongo pygmeus) nests, and even encountered several wild orangutans in the forest area of ​​Parahangan Village.

“Not only that, we also saw a lot of other primates, such as gibbons (Hylobates albibarbis), red langurs (Presbytis rubicunda) and slow lorises (Nycticebus menagensis). Our village forest is like a pandora’s box of biodiversity because the surrounding village forest has been converted into oil palm land. As a result, animals move en masse into the village forest,” Mila continued.

This was also confirmed by the Head of Parahangan Village, Agus Yulianto. According to Agus, the results of a survey conducted together with the BNF Indonesia team found several types of primates with protected status.

“Besides primates, we also came across various types of medicinal plants, numerous forest orchids and several pitcher plants. This is information that we can follow up in developing village forest status,” he said.

Looking at the survey results, Agus continued, the Parahangan village forest is suitable to be developed as a research forest and for ecotourism. In this way, the biodiversity of the village forest can be maintained, while residents benefit economically.

“Therefore, we from the village hope for collaboration, both in the form of assistance and training from BNF Indonesia. Currently, the ones most excited by these developments are young people. They will need proper training as a provision to manage village forests in the future,” Agus explained.

BNF Indonesia Social Forestry Officer, Lilik Sugiarti, told that a number of villages located between the Kahayan River and the Rungan River have quite good potential for biodiversity, which ranges from primates to birds and reptiles, to a variety of plants.

Animals in the Parahangan Village Forest are runoff from the surrounding area, which has become an oil palm plantation. This leaves the forest as the sole remaining habitat available to these creatures.

“We hope that the Parahangan Village Forest will continue to be maintained through activities that involve the community like this,” Lilik concludes.