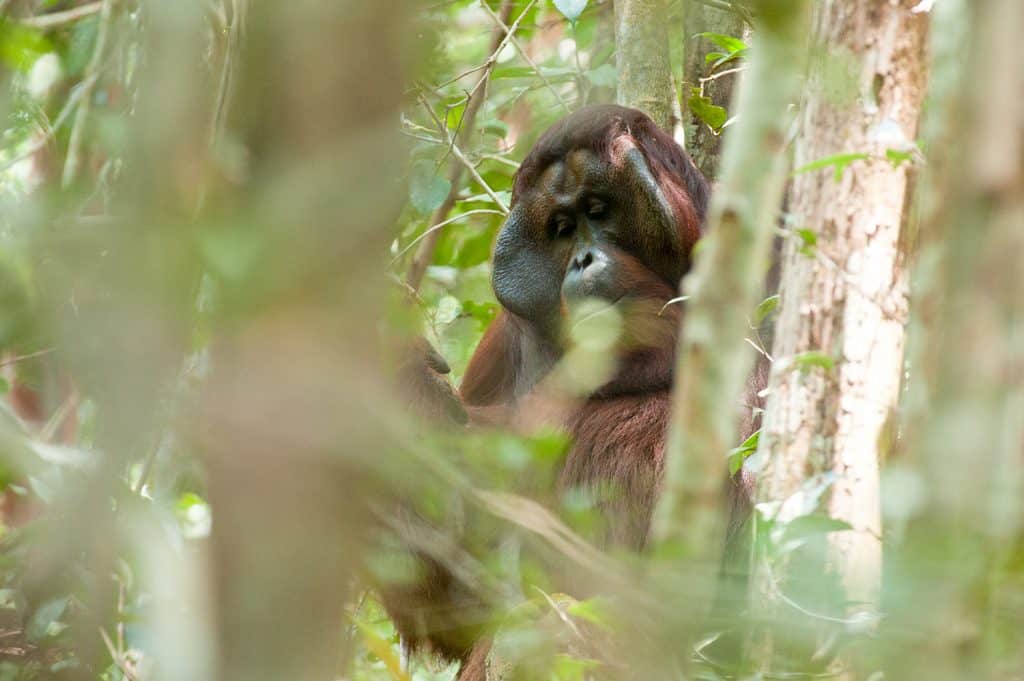 Recently, Dr Helen Morrogh-Bernard (BNF Director) and I published a paper about the male orangutans of Sebangau National Park in the scientific journal Folia Primatologica. The aim of our study was to look at the long calls of the forest’s adult flanged males, and to start identifying what the calls mean. To do this we needed to find out what information is being encoded in the calls: First, is one male’s call distinguishable from another? Second, do calls from males change between years and how does this relate to dominance? Third, do calls change depending on the context they’re made under? And, finally, does the direction of long calls indicate a male’s future direction of travel?

To get this information, I spent four months slogging around Sebangau’s peat-swamps, desperately trying to find male orangutans. Together with BNF’s (amazing) field team, I’d go out searching in the forest each morning; creeping along trails, stopping often, and listening for the tell-tale sound of an orangutan crunching fruit. Because we were looking for flanged-males, we also had the added advantage of being able to listen for the long calls that we wanted to record. The calls are loud, travelling over 2km in clear weather, and they last a long time, typically at least a minute, but sometimes as many as ten. So, the second we heard a male’s call we’d be off in that direction, no matter how far it took us from base camp!

Once we found a male we’d try and follow for as many days as possible, recording long calls with a shotgun microphone, the direction of the call, and the context it was made under (spontaneous, with a snag crash – when the male pushes over a dead tree, in response to another male’s call, or when travelling with a female orangutan). We’d also record the male’s travel by collecting a GPS point every 15 minutes, and all the usual behavioural data collected by the BNF field team.

It was hard work, but during my first summer in Sebangau National Park, I managed to find, follow and record calls from three of the site’s flanged males: Peter Pan, Jupiter, and Salvador. We’re also very grateful to other researchers and field assistants who collected calls from both Peter Pan and Jupiter during previous years, allowing us to identify if the calls have changed over time and to try and make sense as to why?

Once back home, I opened the calls up in a computer program called Raven (Cornell University Bioacoustics), which allowed me to visualise the calls and to painstakingly pull out acoustic variables for each one, which we then checked against individual, context and time. Finally, we tested whether each orangutan’s call directions mirrored his travel afterwards.

Example of a Long Call in Raven 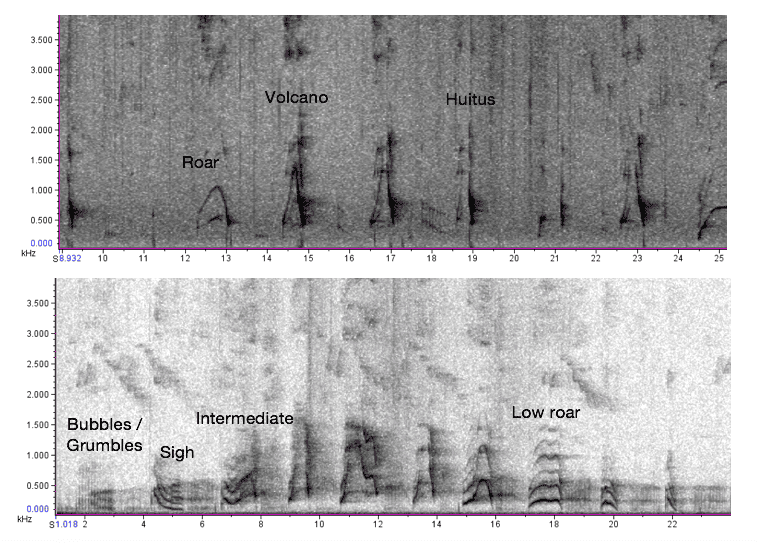 After running (and re-running!) statistical tests we came up with some exciting findings! First, the three male orangutans in Sebangau National Park are individually distinguishable by their calls. We expected to find this, but it’s in an important piece of information meaning that other orangutans may be able to identify who is calling and decide whether or not to approach or avoid them depending on their previous encounters. We also found an individual’s calls can change over time, but only as a function of a male’s changing rank.

Based on previous analysis of male relationships in Sebangau National Park by Dr Ben Buckley (BNF’s Scientific Advisor), Jupiter was dominant when his calls were first recorded back in 2007, but had dropped to the third rank of males by the time I arrived in 2010. His calls seem to have changed as well, becoming longer overall, but less intense, especially in the first 30 seconds. Meanwhile, Peter Pan was dominant during both years his calls were recorded, and they fit the same pattern, being shorter and containing more high intensity sounds, than calls produced by the other males. While we need more data from following orangutans who hear calls, if Sebangau’s orangutans can identify who is the dominant male just from the calls it allows the males to avoid getting into dangerous fights and females to find and mate with the best male.

We also found context to have an effect on call structure, perhaps indicating a different function for calls under each context. Spontaneous calls are perhaps used to attract females, aroused calls (that is snag crash and response contexts) to repel other males, and calls when travelling with a female perhaps serving to keep the couple together, while also repelling any males within earshot. It’s notable that we saw females quickly come to the male after he called.

Our final result was that the males are “announcing” their future direction of travel. This allows other orangutans to adjust their own travel patterns, so males avoid fights, and females seek out mating opportunities or travel with a “friendly” flanged male and avoid harassment from others. The males themselves may have prospective cognition of their future travel, and, if listeners are indeed able to use this information, long calls could provide a mechanism for the orangutans of Sebangau National Park to co-ordinate a dispersed social network within their forest home.

Ultimately, we need to go get more data! Because we can’t ask the animals what they’re trying to say, we need to understand what information is going into the call, and (the next step of our research) to identify how listeners use this information to modify their own behaviour. 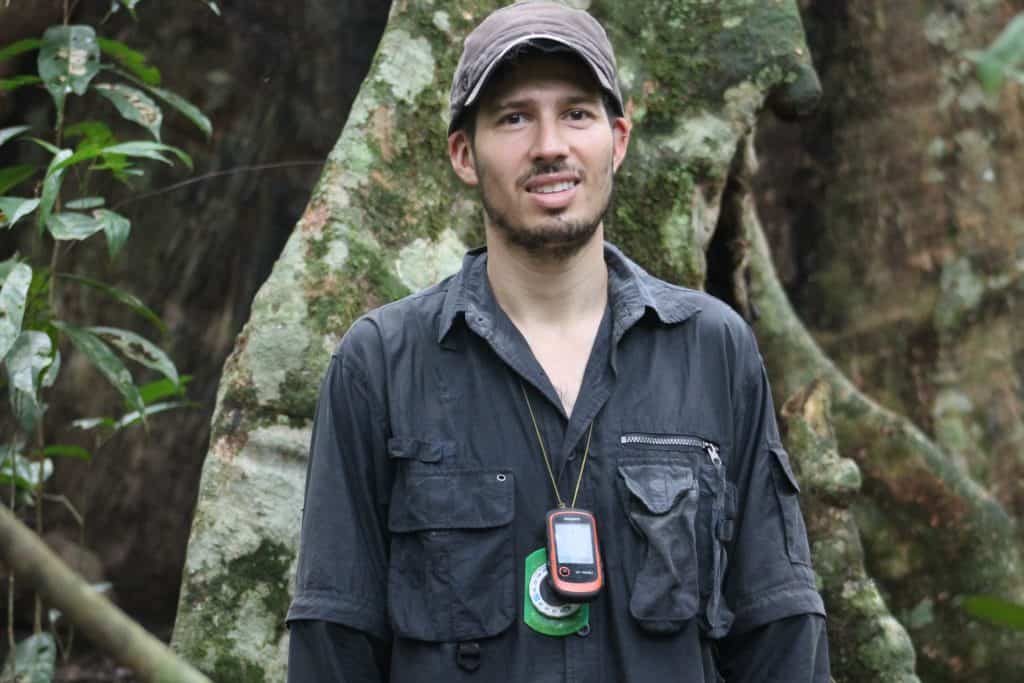 James Askew is a Ph.D. candidate in Evolutionary Biology at the University of Southern California. He studies behavioural ecology and reproductive physiology in three populations of orangutans in Borneo and Sumatra, and is currently drowning in data while writing up his thesis!

PrevPreviousCare about Orangutan Behaviour to Know How Best to Protect Them
NextNEW POPULATION DISCOVERIES: To reveal or not to reveal?Next