Sebangau Camp – ‘Get outta my swamp!’ 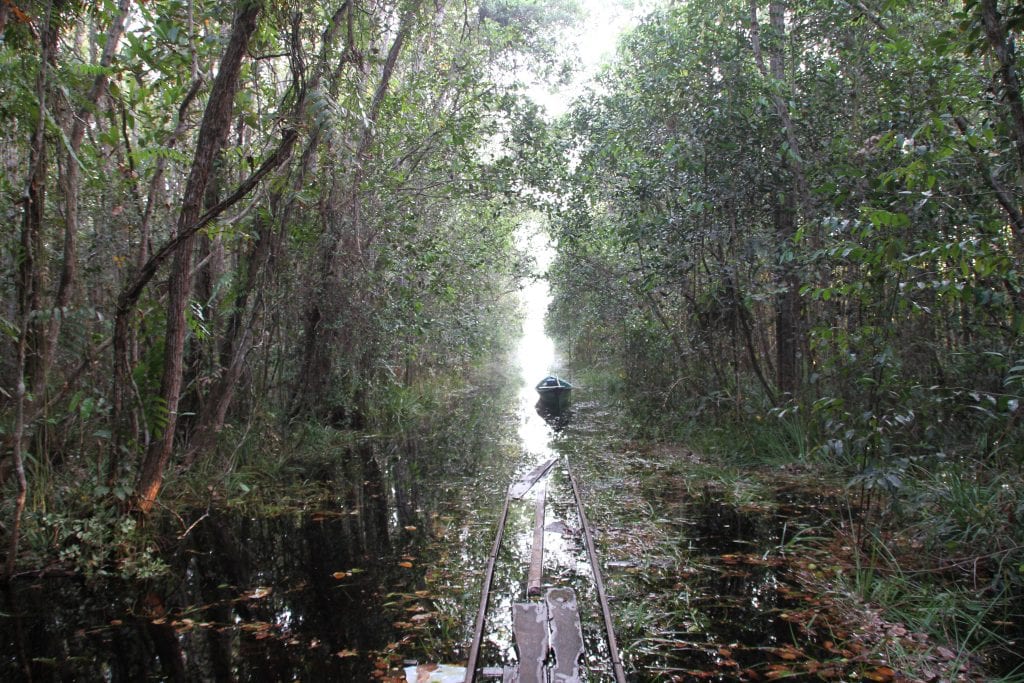 Written by Abi Gwynn (Research student from University of Exeter)
Things have been very busy for me lately, and writing this blog marks two weeks since I left the UK for Indonesia. Since then, I have settled in as a resident of Palangka Raya, had my first glimpse of camp and started to get to know the forest and its inhabitants.

The first glimpse of the Natural Laboratory of Peat-swamp Forest (LAHG) camp, a special zone within the Sebangau National Park

By far the most exciting part so far has been living and working in the Natural Laboratory of Peat-swamp Forest (LAHG), a special zone within the Sebangau National Park. Since this is a pretty long-standing research camp, the forest has really claimed the area back! Just behind the washing up area are some local monitor lizards. They can give you a nasty bite if they had the chance, so sometimes washing up has to wait… I don’t think there’s ever been a better excuse! And just a few mornings ago I was awoken to a strange sound coming from underneath my bedroom floor. It was otters! So I rushed out of bed (at 4: 30 am …unheard of for me…) to try and see them. It was incredibly frustrating, I could hear them right beside me as I wandered around camp, but it was too dark to see. I could even hear them running behind me as I turned a corner which was slightly creepy in the pitch black!

As far as camps go, Sebangau is pretty luxurious. I have my own room with a bed and mattress, there’s electricity every evening and even the opportunity for some 3G if you hit the right spot near the river!

During my first week here I have been getting acclimatised to working in a peat swamp forest, which is pretty challenging! As it’s the height of the rainy season at the moment, the forest is very flooded making getting around a very slow process. For most of the day, my feet are submerged in water which hides roots, vines and peat holes to fall into. Peat holes are a nuisance as they’re invisible, so when you take a step, your foot could suddenly fall until you’re up to your waist in peat soil and water. You just have to laugh and pull yourself back up, it’s a cool dip at least! But navigating peat swamp is physically tough. It can take half an hour just to walk 400m, it’s boiling hot and there are mosquitos trying to eat you alive. The adversity of the environment conjures up the image of the scene from ‘Shrek’ yelling “Get outta my swamp!” in my mind!

From high to low: trees grow magnificently tall from the red, swampy waters below.

But this is a small price to pay for the beauty and diversity of life here. In just a couple of days, I saw so much. A yellow martin, buffy fish owl, pit viper, monitor lizards, many beautiful birds and a plethora of weird and wonderful insects. But my third day in the forest topped it so far. I saw my first orangutan. A female named Juno with a juvenile and a young baby. Considering I have been preparing for this project for over six months, it was a surreal feeling to finally be seeing them. Especially at this time as the team informed me that they had not found any orangutans this month which is very unusual. The day I saw an orangutan was a hat-trick day! I was also lucky enough to see a tarsier with her baby. An extremely rare sight that some of the team who have been working here for over 10 years had never seen before. They are nocturnal primates and very elusive, so it was a shock to see one in the broad daylight and very close to camp! To complete the hat-trick, I also came across red langurs during our search for an orangutan. They were a habituated group so were quite happy carrying on with their daily activities high in the trees whilst we watched from below. What a great day!

Since then, I’ve been learning to navigate in the forest, identify fruits eaten by orangutans and practising aspects of behavioural data collection (such as estimating tree heights, orangutan activities and using GPS). There is a great team of field staff here who are vastly experienced and truly great guys to get on with. I already feel very at home here with them. I think the morale has been a little low in the orangutan team lately since none had been found this month until Juno last Monday. However, since then, we have found a large flanged male, a female called Gracia with her infant Gara, and Gracia’s independent daughter, Georgia, who we have followed for a week. I hope this is the end of the ‘lack of orangutan’ period and that it has boosted the team!

A flanged male orangutan and Georgia; a resident femal

I’ve got plenty more weird and wonderful stories and photographs to come so watch this space!

PrevPreviousWhat it takes to be a human: a lesson from field course 2018
NextBBC Earth’s Tropical Islands: Interview with TwentiNext