***980 teams from SSE took part in pedometer 5 Challenge walking a total of 480,335 miles – greater than walking to the moon and back at 477,710 miles***
***Winning team called Finance and Friends Team ‘NINO (No Input No Output)’ hand over cheque for £5,000 to OuTrop Trust to help conservation efforts in Borneo*** 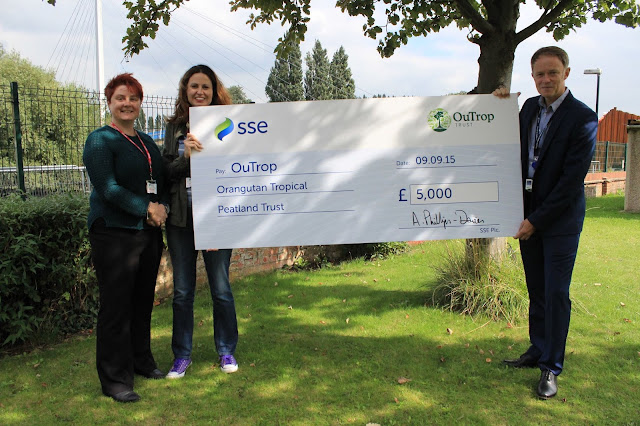 Staff from energy company SSE have really put in the miles by walking further than ‘to the moon and back,’ to raise money for good causes.
Nearly 1,000 teams completed the ‘5 Challenge’ which lasted five weeks and encouraged them to walk across the five home nations of GB and Ireland in teams of five, using pedometers to record every step they took.
In total 980 SSE teams took part and walked a combined total of 480,335 miles. This distance is greater than that to the moon and back (477,710 miles).
Several prize draws took place throughout the challenge totalling over £20,000 for charities and the star prize for one team was a cheque for £5,000 to hand over to UK-based conservation charity OuTrop, which works to help protect orangutans in the wild.
Reading-based Mark Pearson-Hall, Senior Retail Management Accountant for SSE, handed over the cheque to OuTrop. He said: “We’re very pleased to be able to hand over £5,000 to OuTrop to help them in their magnificent work in the wilds of Borneo to save orangutans.
“A lot of us at SSE loved the advertising campaign the company put out featuring our CGI orangutan Maya, so it feels appropriate to do something for the real creatures. We had a lot of fun along the way raising the money and putting in the miles.”
Dr Susan Cheyne, OuTrop’s Director of Gibbon and Felid Research and Conservation, said: “We are very grateful to SSE for this donation, which will help in our efforts to conserve wild orangutan habitat in Borneo.
“Orangutans are threatened by habitat loss and killing by humans, meaning urgent conservation efforts are needed to ensure their future in the wild. We thank the NINO team and everyone involved in the pedometer challenge for helping support us in our conservation mission through this donation.”
For the walking challenge the SSE teams set out to walk from Perth to Dublin to Belfast to Cardiff to Penner Road and finally to Bristol (via Reading) which is the equivalent of 716.5 miles and are sites of SSE offices.
The winners of the Team Photo Competition are ‘Finance and Friends Team NINO (No Input No Output)’. Members of the Finance and Friends NINO teams walked to the top of Ben Vrackie, north of Perth, and can be seen celebrating their achievement in the picture attached.