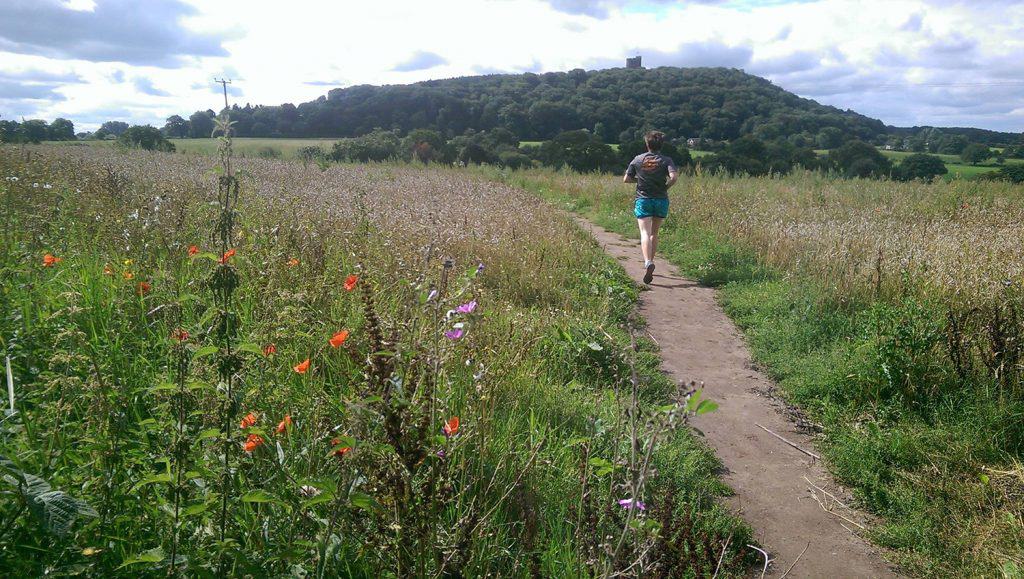 Running across the fields in the evening night I saw a lithe, dusty-orange shape moving over the golden stubble. A fox, his dinner clasped between his teeth, finds his spot and begins to dig, soon depositing his kill. He doesn’t notice me passing closely by, busy as he buried his treasure.

I have run away my summer. Run passed hedgerows, fresh buds lacing the tips of their branches; through heather blooming in vivid purple; and across fallen apples littering the towpaths of the canal. Fours days a week for four months I’ve donned my trainers, clipped on my watch and headed out into the countryside. In all I’ve run over 300miles, spent a total of 48hrs on the hoof and could, if I’d chosen to, have gone from London to Edinburgh with my efforts.

A few weeks ago I took on the longest run of my training; 21miles. As an avid walker I’ve occasionally walked such distances, but generally this takes up my entire day and leaves me exhausted. My run by comparison took me 3hrs 39mins. Not quite the whole day, but still exhausting. It’s amazing how far such a distance can take you. I passed through a forest, two villages, along a disused railway line, passed two nature reserves, through a country park and along windy lanes, passed beautiful country houses, over bridges and round horse riders, cyclists and walkers.

In its own way running makes you realise how big the world really is. On cars, trains and planes we short cut the country, leaping from A to B in great bounds, but take the time to run, or walk or ride and you begin to feel the greatness of the distance between here and there. Suddenly every hedgerow is made of individual leaves, every road of puddles, cracks and repairs, every field of lines of neatly arranged crops. Details become more vivid in this slower pace mode. I find myself picking out the damson trees which sit dotted along the roadside, their fruits hanging from the branches like fat purple raindrops. I watch them as they grow bigger, closer, more detailed and then pass. I observe the birds gliding above or squirrels fidgeting below. There is never an empty scene on a run, only more and more details the closer you look.

One run, not too long ago, I spent much of my time chasing dowdy looking pheasants up and down the hill, as they raced away before me, too lazy to take flight. More energetic were the two weasels, which flew across the road, diving into the long grass like well-trained stunt doubles. Running passed a ruined church I watched a red kite gliding low over the field at my side, seeming like a sheet of paper caught in a rising current. But my favorite is still the fox, so unaware of my presence. Too busy in his own life to take note of mine.

Training for the marathon has been one of the biggest commitments I’ve ever made. I wasn’t sure at first if I would stand the test. I’ve run through rain, sun, cold and heat. I’ve run till my clothes have started to sag and my shoulders feel boney to my own touch. My legs have grown thick and strong, and my breath steady as I climb the miles. Once this is all over, and my new-found routine comes to an end, my legs will weaken, my waist expand, and one day people will be surprised that I ever took on such a challenge. But for now I’m temporarily someone new, someone fitter, slimmer and ready to race 26miles in only a handful of hours.

People often ask me why I chose such an arduous and difficult task. The answer is probably not as clear as they would like. I wanted a challenge, I wanted to follow my father’s footsteps, I wanted to prove to myself that my limits are far beyond what I once thought they were, and in a world which seems everyday to crumble a little more around me I wanted to lend a hand building something back up again.

I spent a long time debating which charity to support with my run. There are so many worthwhile causes in our world I found the choice frighteningly large. I opted for the Borneo Nature Foundation both because of the fantastic work they do and also because of the urgency of their plea. Our tropical forests are vanishing, not just dramatically as more legal and illegal logging pushes in under the canopy, but also as new roads are built, dividing what was one forest into many, as shifting climates put more pressure on our rarest wildlife, and as poachers take our most stunning creatures for meat or trade. Every day a little more goes, and every day every one of us contributes to that loss in some small way, be it by driving our cars, buying products with palm oil in or simply by turning a blind eye to the issue.

I first heard of the Borneo Nature Foundation at a peatland conference. My job is in peat, restoring it for the rare and wonderful wildlife it supports within the UK. One talk in particular horrified me. It spoke of the rapid disappearance of the tropical peatland forests of Borneo. Of how the palm oil farms were expanding, how the peat was drying out and being set on fire, releasing billions of tonnes of carbon into the atmosphere. Of how orangutans were killed by plantation workers to ensure forests wouldn’t be protected because of their presence, of how the world was changing so rapidly that many of the local people were being left with nothing.

Orangutans are beautiful creatures, so close to us it seems possibly to invite one round for tea. But beyond these graceful giants the forests of Borneo harbour so much more, from sun bears to pygmy elephants to clouded leopards and so many rare and unique plants, invertebrates and mammals. If we lose all this we’ve truly failed in our stewardship of the Earth.