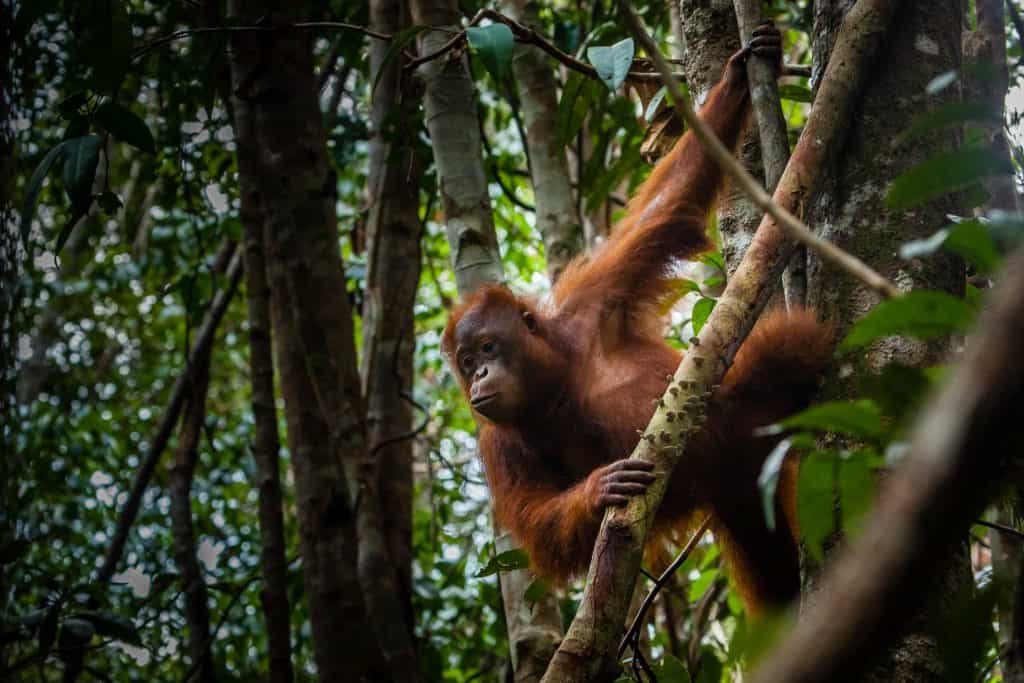 Wednesday afternoon in August, in a thatch-roofed hut at the end of Kereng Bangkirai Village, Palangka Raya City, Central Kalimantan, five teenagers were seen sitting in a circle 1.5-2 meters away from each other. While wearing masks, they enthusiastically discussed, selected, and sorted out the best statements about saving orangutans to be conveyed on social media and to the general public.

A moment later, Mahda (14), one of the five teenagers suddenly moved from her seat and took a piece of paper and wrote the sentence: ‘Take action now!!!’ She then continued with the phrase ‘#saveorangutan, orangutans need people who care.’

“Orangutans are threatened with extinction. We, as the young generation who live near the forest, are sad. Therefore, orangutans must be conserved, and more people need to care,” said Mahda when explaining the messages she wrote.

“As primates, they are very useful for the forest. For example, they eat fruit, then defecate the seeds, and the seeds can grow into new plants. And so on,” she continued.

On that day Mahda and four of her peers took the initiative to commemorate International Orangutan Day 2020. They are members of the Sebangau Rangers community, a community of children and adolescents living near the Sebangau National Park area, which was initiated by the Borneo Nature Foundation (BNF) Education Programme.

Since April 2020, the Sebangau Rangers’ activities were halted due to the pandemic. However, since July 2020, activities have restarted while following Covid-19 protocols, such as checking body temperature with a firing thermometer and controlling the distance between participants. The number of participants was limited and the duration of the activity, which is usually two hours, was shortened to a maximum of 30 minutes, then continued with assignments at home.

“If the pre-pandemic meeting was interspersed with field observations, during the new normal of the pandemic era, the activities changed to adjust to the rules. Every Sebangau Ranger participant must come in good health and get permission from their parents,” said BNF Education Staff, Aloysius Dinora (27), who was accompanying Sebangau Rangers activities that afternoon.

However, the Wednesday afternoon meeting was a special occasion for the Sebangau children. Activities focused on celebrating International Orangutan Day 2020, a day to commemorate the ecological importance of this iconic species’ existence in nearby forests.

“Orangutans in forests in Kalimantan are now under threat. Every year in the dry season the forest burns, there are also people who take wood from the forest, cut it carelessly. So, today we together ask people to help protect the forest so that orangutans do not disappear, and our generation can still see them,” said Icha (14), another member of the Sebangau Rangers.

Yes, unlike their parents, now it is not easy for Sebangau children to see orangutans. In fact, some of the children on the edge of the peat swamp forest have never seen one of the four great ape species on earth.

This is as told by Igen (50), Chairman of RT 2 RW 1, Kelurahan Kereng Bangkirai. In the past, in the 1990s, when he was young and started living as a traditional catch fisherman (most local residents work on the edge of the Sebangau National Park peat forest), it was very easy to find orangutans, especially when staying overnight in the huts of the forest.

“In fact, we don’t even have to go into the forest just to see orangutans. Along the river to the forest area, orangutans are easy to find. For monkeys, of course very often. Proboscis monkeys (bekantan) too. They (orangutans) usually comb the trees on the riverbank,” said Igen.

Over time, continued Igen, forest encroachment occurred and became more destructive when the One Million Hectare Program was launched by the Soeharto government. The program was the clearing of peatlands for food agriculture.

“Since then the encroachment and forest destruction have occurred frequently, fires have become frequent and this will automatically reduce the orangutan population. When forests are encroached and plundered, fires are bound to occur,” he said.

Now, since the Sebangau National Park management banned encroachment, forest destruction has tended to decrease. However, the orangutan population has already declined. It is no longer easy for residents to see orangutans, except occasionally when they are fishing deep in the forest area.

Sebangau children’s daily activities are generally different from their parents’, who entered the forest since they were young to look for fish. This situation also prevents the Sebangau children from getting to know firsthand the primates which are the umbrella species for the survival of the forest ecosystem.

“Therefore, as parents, we are very happy with the Sebangau Rangers activity which reintroduces the importance of orangutans in the forest. This is important so that the future generations will help preserve orangutans in Sebangau,” said Igen.

Data from the Ministry of Environment and Forestry (KLHK) in 2016 stated that the metapopulation of the Bornean orangutan (Pongo pygmaeus), is estimated to be only 23% remaining. This will not be sustainable in the next 100-500 years, if the threat does not decrease or disappear due to forest conversion in orangutan habitat to other functions.

The results of Alexander Nater et al’s research, entitled “Morphometric, Behavioral, and Genomic Evidence for a New Orangutan Species” published in the Journal of Current Biology (2018), stated that the world has lost nearly 150,000 individual orangutans on the island of Borneo in the last 16 years due to habitat loss and poaching. Based on the same study, it is estimated that we will lose another 45,000 individuals by 2050. In connection with this population decline, The International Union for Conservation of Nature [IUCN] has included all three species of Orangutan in Indonesia as critically endangered.

“As a future generation, we hope that no one will hunt orangutans anymore. Nobody cuts down trees anymore so that the orangutans still have a house,” said Mahda.