From Workshop to Newsroom: Voicing wildlife and conservation in the Indonesian press and media 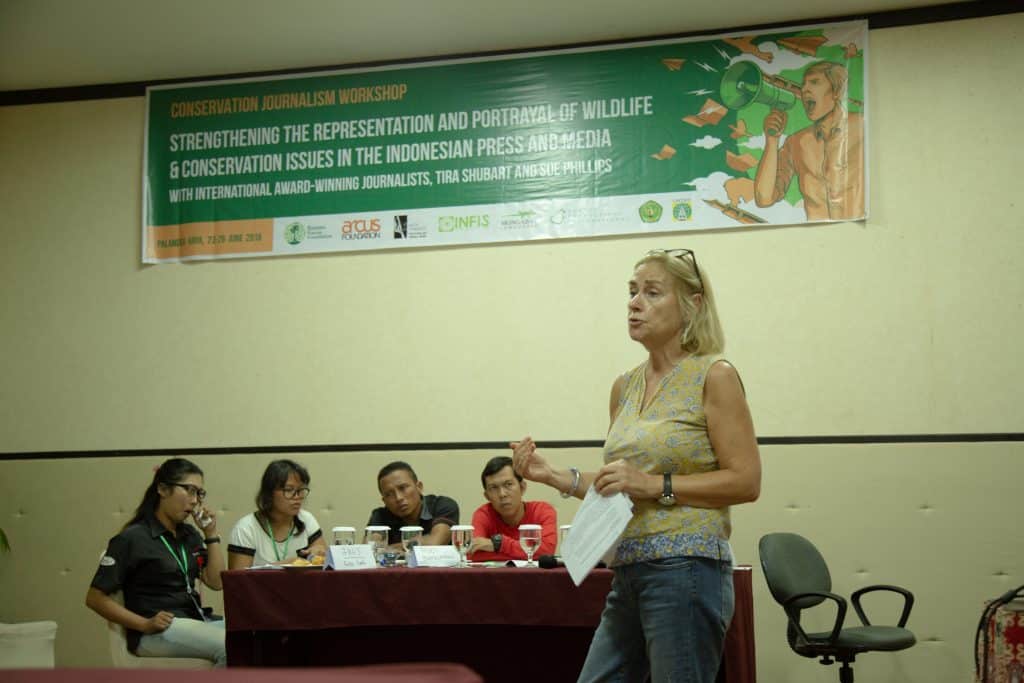 Like many other news consumers, Indonesian public interest ranges from the glamorous life of celebrities to serious stories about political scandals. However, little coverage has been given to wildlife and conservation issues.

To fill the gap, Borneo Nature Foundation (BNF) recently pioneered the first ever Conservation Journalism Workshop that brought together NGOs, universities, government representatives and journalists from all over Indonesia from 23-26 June 2018 to strengthen the representation and the portrayal of wildlife and conservation issues in the Indonesian press and media.

The workshop was led by two award-winning journalists, Sue Phillips (former Founding Director of Al Jazeera) and Tira Shubart (Freelance International Journalist). The first two days were allocated for NGOs, universities and the government, and was then followed by one full day conservation journalism training for journalists from prominent print media, television, radio and film productions. Sue and Tira shared techniques and key strategies to bring the complex messages of conservation to a more down-to-earth approach in order to be well-accepted by national and international audiences.

For Tira, audience plays a vital role in the circulation of the news. “It’s important to know the audiences because it helps journalists to redefiine the messages” said Tira. For that reason, Tira reminds journalists to carefully select the language for mediating the messages to general public audiences.

There are many jargon and complicated terminologies in conservation, she said, that will make ordinary people confused. For instance, the words one hectare is frequently taken for granted. “Most people do not know how big a hectare is, but almost all of them know if you say it’s the same size of a football field” she added.

Furthermore, personalizing the story will help establish the “sense of place” for the audience. Tira refers to a successful BBC Earth radio coverage about Sally the Rhino in Kenya that is narrated perfectly by the journalist, which received huge public interest in Africa.

Equally important, Sue emphasizes the importance of the strategic collaboration between NGOs and international journalists. To Sue, developing relationships with international journalists can communicate critical issues in conservation, and get the stories out to the world. “In this part of the world, you must have strong alliances to support each other to prevent what people are doing out there to nature” Sue said.

During the four-day workshop, Bernat Ripoll Capilla, BNF Field Director, also presented conservation projects carried out by this green-shirted organization. BNF has been working together with communities who live nearby the majestic forests of Borneo and is fully committed to develop and improve the quality of life of those people through our community development programme.

“We have been so exhausted reading many bad news about forest fires, wildlife trade and deforestation. Why don’t we shift to more optimistic views about our environments?” Berni expressed.

We also welcomed guest speakers; the Senior Editor of Mongabay Indonesia, Rahmadi Rahmad, and Een Irawan Putra, the Excecutive Director of Rekam Nusantara and Indonesia Nature Film Society (INFIS). Rahmadi shared his experience in advocating wildlife through news stories that he wrote for Mongabay; the most-visited website for up-to-date environmental information. Een presented his film projects that garnered huge amount of attention from the government, organizations, companies and the media.

On the last day of the workshop, all workshop participants came together during the field trip to our research camp in Sabangau Forest, which is managed under CIMTROP, University of Palangka Raya. The field trip was designed to establish better connections and to alter the importance of positive conservation efforts that BNF has been working on.

Joan from the local media, Tabengan, says that he’s really excited with the workshop. “This last day is so much fun, I found some rare, endemic fish whilst walking through the forest” said Joan.

Fina, from Borneo Productions International, was among many who seemed very motivated throughout the event. “I love butterflies, joining this event I was well-informed about the role of butterflies as an indicator for forest quality. I learn a lot from the last event, and the field staff are very knowledgeable!” Fina added.

Indonesia is long recognized as a nature-rich country that houses great rainforests across the archipelago with hundreds of indigenous tribes and millions of key species tied to them. But, the unbalanced information that has blindsided the news consumers from what actually happens and exists around them.

By the end, the successful story of this event will never happen without strong partnerships. Thus, we would like to deliver our great appreciation to our donors; especially Arcus Foundation for providing us with generous support; and our partners IUCN SSC Primate Specialist Group’s Section on Small Apes continuing guidance; Mongabay Indonesia and INFIS for inspiring us with stories and films during plenary sessions, and Borneo Productions International for helping us with the documentation of this impactful workshop.

This eye-opening event is expected to shed light for NGOs, universities, government and media to work hand in hand to advocate for changes to improve the quality of the environment and use the power of the media to voice the positive conservation efforts instead of feeding the public with pessimistic stories. (AE) 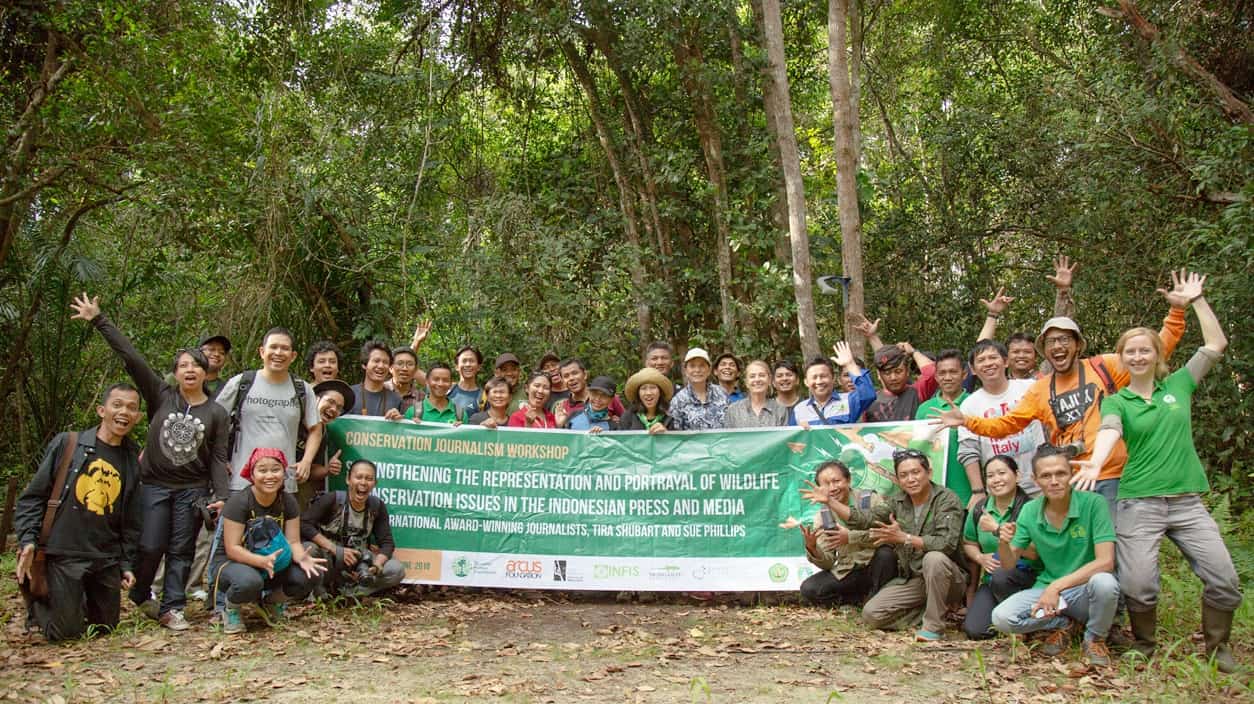