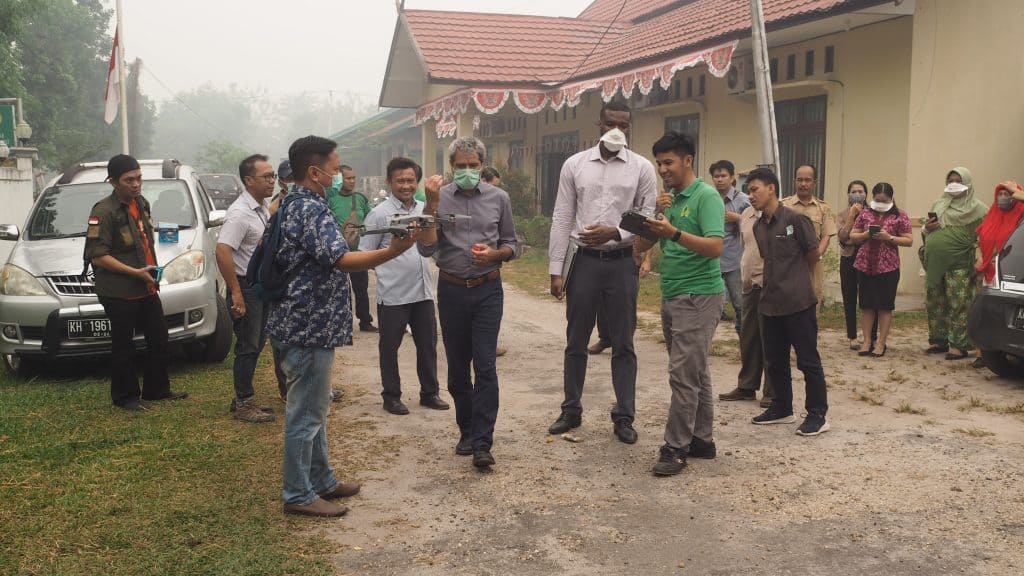 Land and forest fires in Kalimantan are getting worse every day. Even though there have been several showers of rain in Palangka Raya over the last few days, an air quality index (AQI) reading of 1,017 was recorded on the morning of 27th September. This is more than three times the AQI reading of 300 which is classified “Hazardous” and which poses a serious threat to health.

This year, fires in Central Kalimantan were first reported in July and the situation has worsened throughout August and September. Based on data from Global Forest Watch, 82,011 hotspots have been detected between 1st and 26th September, and more than 2,770 fires have been detected in the Sebangau National Park forest.

In recent years, Professor Serge Wich of the Liverpool John Moores University has identified ways in which drones can contribute to conservation. For example, drones have been used to monitor key species and biodiversity and assess orangutan population density through nest surveys in remote and inaccessible forest areas, as well as monitoring the habitat loss and fragmentation which threatens so many species worldwide.

And now, working with Steve Longmohe and Temitope Sam-Odusina, Professor Wich has developed new drone technology to support on the ground firefighting efforts.  The first design of this technological innovation has involved modifying a “standard” six-propeller drone with the installation of thermal imaging and visual spectrum cameras which can detect heat, not only on the surface but also the hotspots deep inside the peat which are sometimes undetected by satellite sensors due to thick smoke or the small fires that limit satellite sensing capabilities. The second design of this technology is installed on DJI Mavic Pro. The data collected by these cameras are relayed directly back to the drone operator who is then able to update firefighting teams in real-time so they can identify priority areas for action. On recent modification, the patrol team can flight the drone maximum 4.3 miles far.

On 16th September, UPT LLG-CIMTROP at the University of Palangka Raya, in collaboration with Borneo Nature Foundation (BNF), and Professor Wich and team from the Liverpool John Moores University conducted a workshop on the use of this new thermal monitoring drone technology. The workshop was attended by local firefighters, government agencies, NGOs and other key stakeholders.

“The use of the thermal drone is expected to support the patrol and firefighting teams to detect locations which are burning, making it easier for them to handle fires in the field,” said Dr. Mark Harrison, Co-director of Borneo Nature Foundation International.

The local Community Patrol and Community Firefighting Teams, supported by both CIMTROP and BNF, are now using this thermal drone to detect fires in Sebangau National Park. Using the drone not only helps to identify the hotspots which pose the greatest threat but also to track the direction in which the fires are moving and so prevent the teams on the ground becoming trapped by fire.

Visual of drone thermal using by Patrol Team in the Sebangau National Park forest
Use of thermal drones to fight fire has transformed drones into a serious tool for conservation, taking fire detection and monitoring to a new level and increasing the level of protection we can bring to the forest and to the health and welfare of the communities which are so seriously affected by the smoke.