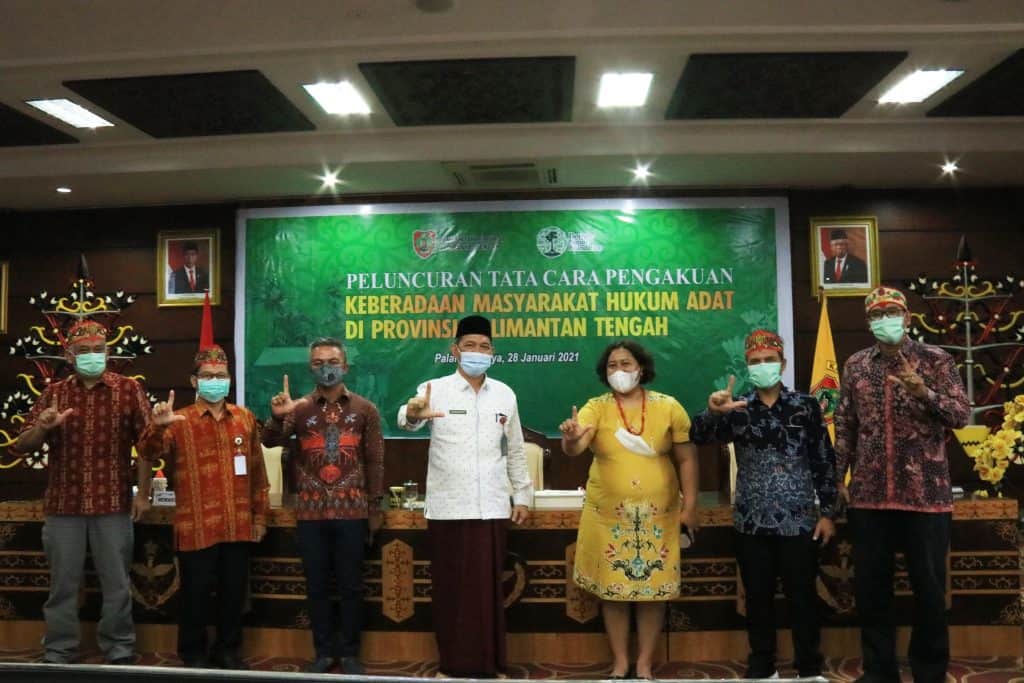 Palangka Raya, 28th January 2021 –  The Provincial Government (Pemprov) of Central Kalimantan together with the Borneo Nature Foundation (BNF) Indonesia inaugurated the Launch of the Guidelines for the Recognition of the Existence of the Indigenous Community (MHA) of Central Kalimantan. The launch of the guidelines took place at the Eka Hapakat Hall, Governor’s Office, Palangka Raya, Thursday (28/01/21).

This activity was attended by Regional Secretary (Sekda) Fahrizal Fitri, Chairman of the Borneo Nature Foundation (BNF) Indonesia Juliarta Bramansa Ottay, and representatives from the Regional Leadership Coordination Forum (Forkopimda). Through online video conferences, Deputy Minister of Environment and Forestry of the Republic of Indonesia (Wamen LHK RI) Alue Dohong, and Director of the Environmental Fund Management Agency, Djoko Hendratto, participated in the event, as well as a number of provincial and district related agencies, throughout Central Kalimantan.

Fahrizal also emphasized that this is an effort to suppress potential conflicts that occur in the field. So far, conflicts regarding territoriality often clash with members of indigenous community or indigenous territories. In addition, these guidelines are a guide for entrepreneurs. The provincial government wants everything to be clear and firm, both related to the MHA and investment activities.

The book that was launched will serve as a guideline for the Central Kalimantan Provincial Government as well as for Regency and City Governments throughout Central Kalimantan, and especially for the MHA Formation Committees in each region, in carrying out the identification, verification and validation processes of the MHA proposal.

Described in clause 1 number (37) of Perda 16/2008, the Dayak Community are all people of the Dayak ethnic group who come together, live and have a culture as reflected in all their local wisdom by relying on customs, and customary law. In their life and culture, the Dayak people have customary rights, namely the right to live by utilizing existing resources within the indigenous territory, based on customary law, as known in local Dayak institutions.

Meanwhile, when compared with the terminology used in the Minister of Home Affairs Regulation No. 52 of 2014 concerning Guidelines for the Recognition and Protection of Indigenous Communities, Article 1 paragraph (1) states: “Indigenous peoples are Indonesian citizens who have unique characteristics, live in groups in harmony according to their customary law, have ties to ancestral origins and / or similarities, a place to live, there is a strong relationship with land and the environment, as well as a value system that determines the economic, political, social, cultural, legal institutions, and uses a certain area from generation to generation.”

From this understanding, the Central Kalimantan Province, which has an area of ​​153,564 km2, and a population of 2,660,209 people, consisting of various cultures, languages, and local traditions. Tribes that are generally known in this area include Ngaju, Ot Danum, Maanyan, Bakumpai, Siang, Siang Murung, Lawangan, Kuhin, Witu Hamlet, Malang Hamlet, Bawo, Tewuyan, Punan Aput, Tomon, and Paku. They are ethnic diversities that need to be specifically recorded for their existence relating to indigenous communities. The existence of the Dayak Community in the Province of Central Kalimantan has been able to fulfill elements from generations to generations living in certain geographic areas, known as areas of kedamangan (indigenous region). These communities have ties to the origin of ancestors; strong relationship with lands, territories, and natural resources in their indigenous territories; and the existence of a value system that determines different economic, political, social and legal institutions, either partially or entirely of society in general (Dayak Customary Law (HADAT) 1894 and other Dayak customary laws).

The Constitutional Court Decision 35 / PUU-X / 2012 contained a statement affirming that a ancestral forest was removed from its position from previously being part of state forest, to be included as part of the category of private forest. This is a consequence of the amendment to Article 1 point (6) of the Forestry Law.

The Head of the Borneo Nature Foundation (BNF) Central Kalimantan, Arta, fully supports the efforts of the Central Kalimantan Provincial Government in helping MHA to gain legal recognition. This is because ancestral forests are considered to have an important role in protecting forests, which is in accordance with the vision and missions of BNF, namely for conservation.

“So when we want to encourage conservation in our landscape in the Rungan area, we meet with people who have an ancestral ironwood forest, and when we work together with the community, this forest can protect the environment. From that point of view, BNF is committed to helping them to get recognition for these ancestral forests, which we can hopefully become joint partners in for area management,” he said.

However, Arta added, to be able to get the designation of ancestral forest, it must go through a long process, starting from the determination of the MHA and so on.

“For this reason, we are working with local governments to harmonize this procedure, so that problems related to MHA and ancestral forests can be resolved immediately,” he concluded.