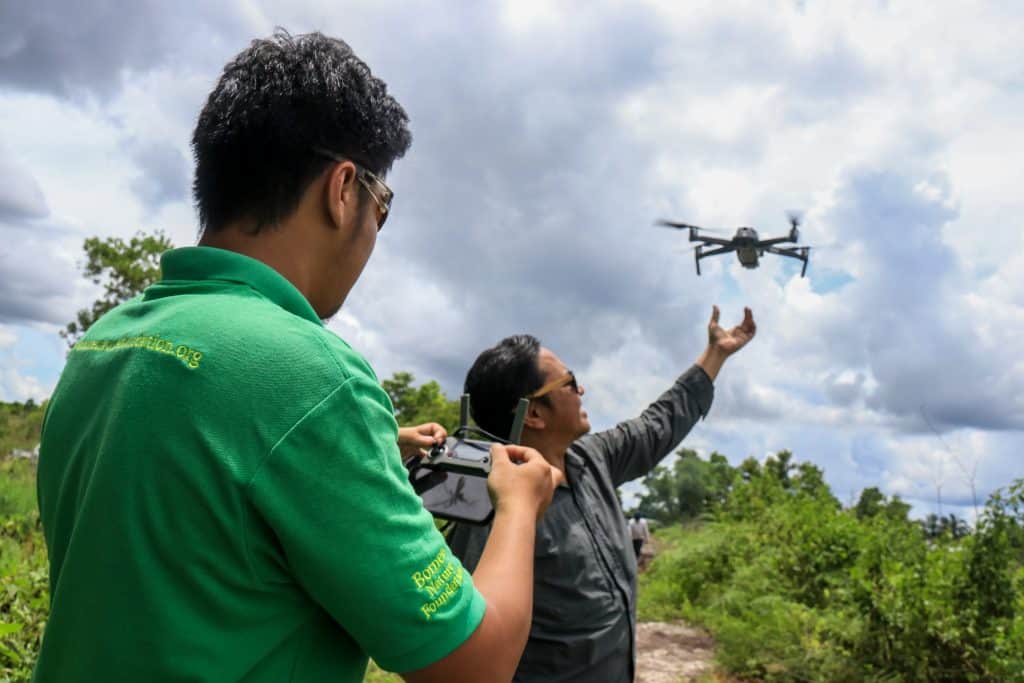 On the 4th March 2020, the UPT LLG-CIMTROP at the University of Palangka Raya (UPR), collaborated with the Borneo Nature Foundation’s (BNF) Drone Team to conduct a second trial of thermal drone studies in the UPR forest.

The experiment was carried out using a ‘DJI Mavic Enterprise’ Dual Drone, and began at a predetermined point by a fire pit. The team measured the temperature in the fire pit before the fire was ignited, and then continued to record the temperature after the fire started using a type of thermometer called a “thermocouple”. The fire furnace contained charcoal to stabilize the heat in the embers.

“The heat generated from burning wood is less stable, therefore we use charcoal to maintain heat stability at the experimental point,” said BNF Drone and GIS Coordinator, Restu Aminullah.

Under the hot sun, the BNF and CIMTROP teams began to light controlled fires using paraffin and kerosene. After the fire had stabilized, temperature measurements were taken again at the fire pit before the drones were flown, up to a maximum height of 120 m.

Restu explained that the goals of this thermal drone experiment were to understand the temperature parameters that can be read through video/photo images from thermal imaging and visual spectrum cameras mounted on the drones.

“Another goal is to find out the difference in temperature recorded by thermal imaging with peatland temperatures to enable future automated detection of fires from drone images. It is hoped that later this technology can be used to support fire-fighting efforts by helping detect fires.” he said.

CIMTROP UPR researcher, Petris Perkasa, revealed that the use of this thermal drone would reduce operational costs for disaster management, especially in the Natural Laboratory of Peat-swamp Forest (LAHG), a special zone within the Sebangau National Park. Thermal drones can also be used to find fire-fighting paths and safe evacuation routes for firefighters.

“The operational costs are more minimal than when we use humans to patrol, and with this tool, the lives of the officers are safer. We can see which routes we can use to evacuate when a fire occurs,” he said.

The cost for manual fire monitoring is more expensive than using a drone for a long period of time. Usually, monitoring requires multiple viewing towers that are 20 meters high. It can cost IDR 30 million to build 1 tower alone.

“Apart from being able to reduce the risk to field staff, this tool is also more efficient than when we have to build towers at a higher cost. With this tool, we can detect fire seeds to a certain depth below the surface of the ground, so we can act immediately before the embers turn into fire,” he added.

BNF would like to thank Liverpool John Moores University (LJMU), and UPT LLG CIMTROP at the University of Palangka Raya (UPR) for supporting the activities carried out in the university forest and the Science and Technology Facilities Council for funding support.