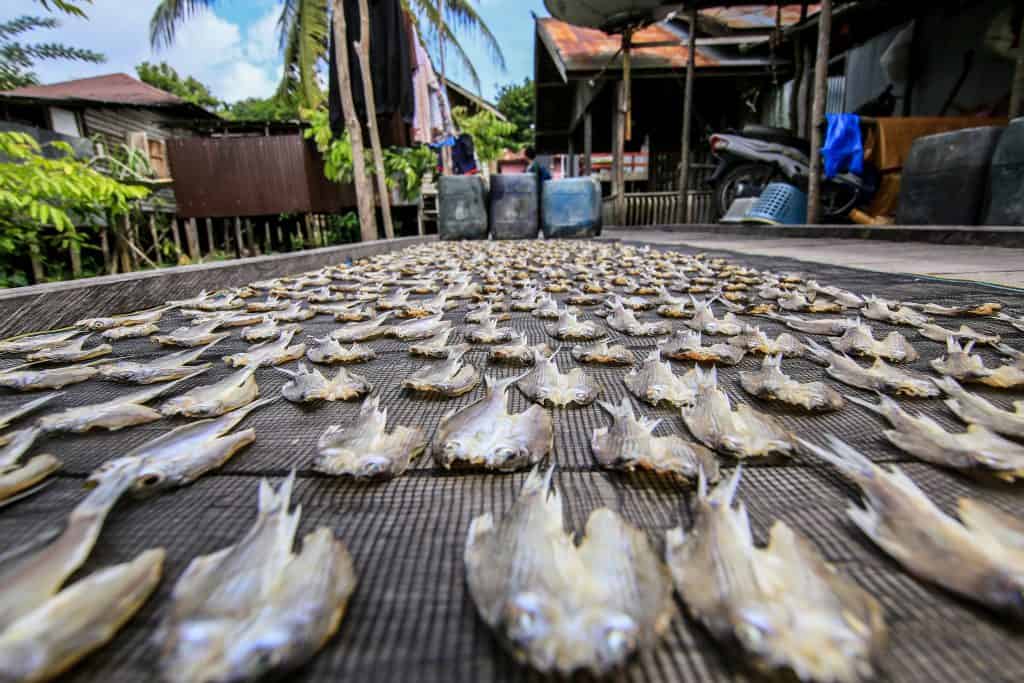 Forest conservation without the welfare of the community around the forest is impossible. The two sides must go together. Supported by the Borneo Nature Foundation, and driven by the hope of living more prosperously in a sustainable manner, a number of residents living at the edge of the forest in the Rakumpit subdistrict, Palangka Raya City, chose to plant a new source of livelihood in their garden.

A morning on the banks of the Rungan River, the brown water seemed to fill the body of the river. Breaking through the green forest that stretches near Panjehang Village, Rakumpit Subdistrict, the sound of cicadas, birds, monkeys, and the occasional calls of gibbons, echoes through.

The voices of nature fought boisterously against the roar of the gold mining machines, which are commonly found along the river. Since the early 2000s, mining for gold using vacuum machines has become the main livelihood of most of the residents who live on the banks of rivers in Central Kalimantan.

There, teenagers and adult men from the local villages work to collect grains of gold to support themselves and their families. If they are lucky, they can buy a new vehicle and explore the city.

In the midst of the roar of the machines and the men in search of gold, Sikun (55) chose to keep himself busy in his garden. Two plots of catfish ponds, each measuring 3×5 meters and 2×4 meters, have been decorating his yard for nearly a year. Around the fish pond, he cares for various types of plants, ranging from pineapples, vegetables, papaya, cassava, medicinal plants, to free-range chicken coops.

“This is very fun for me. Even though my yard is not very large, by raising fish, growing vegetables, fruits, and medicines, my family’s economy has been greatly helped. At least the kitchen needs are fulfilled,” said Sikun.

About 400 meters from Sikun’s house, Martine (44), looks busy filling her fishpond with fresher water. She does this routine once a week.

“From the training we have received, changing the pond water once a week is very important so that the fish we raise grow well,” said Martine.

Sikun and Martine both have two fish ponds in their gardens, and they don’t throw away the cloudy pond water, they use it to water the vegetables, flowers, and fruit plants that they grow in their garden. The plants thrive.

“In fact, we don’t even need to fertilize these plants because the pond water is like fertilizer. There are many nutrients,” added Sikun.

From raising fish for the past year, Martine and Sikun have succeeded in two harvests, which they can then sell.

“Some of it is eaten by our family. This really helps our economy,” continued Martine.

Sikun and Martine are not alone. Since last year, no less than 14 families in Panjehang Village have started to actively use their gardens as a source of livelihood. They raise fish, especially catfish, by making fishponds of varying sizes, from 2×3 to 4×6 meters.

Around the fishpond, they grow a variety of plants with organic permaculture methods. Fruit plants are grown naturally, with pond water as a fertilizer, which contains many organisms that are good for plant growth.

People in Petuk Barunai Village, which is located adjacent to Panjehang, have also begun to develop fish ponds and permaculture gardens as a new source of livelihood. Currently, 27 fish ponds have been developed in the two sub-districts, which are two of the three villages assisted by BNF for community empowerment programs for the development of sustainable livelihoods and forest management rights in the Rungan Landscape. The other BNF assisted village in the program (supported by Civilsamfund I Udvikiling (CISU), Denmark), is the Bukit Sua Village. However, unlike Petuk Barunai and Panjehang, the mentoring programs in Bukit Sua are aimed at cultivating kelulut honey instead of fishponds.

BNF Community Empowerment Coordinator, Yuliana Nona, explained that the goal of empowering communities around the forest through the development of permaculture gardens is to increase community awareness to use the land around their homes.

“The idea is simple, namely to produce food that can be consumed without clearing new land in the forest, or conduct economic activities that tend to destroy nature,” said Nona.

Although looking for freshwater fish is not new for the people along the Rungan watershed, or for the people of Central Kalimantan in general, cultivating fish in their gardens is a new concept. The communities on the edge of the forest are more familiar with the culture of fishing in the river, hunting, or looking for a source of livelihood from nature.

The relatively weak culture of cultivation was a challenge for BNF when it was first introduced in the community empowerment program in the two villages. For this reason, since 2019, the BNF Community Empowerment Team has carried out a series of activities to introduce permaculture to residents in the two villages. Starting from socio-economic surveys, socialization meetings, and the potential of the urban village, to training in permaculture, inland fisheries cultivation, and making fish food.

“The residents then formed cultivation groups and held regular group meetings. From the meetings, they can exchange ideas and experiences on how to solve problems that they face when cultivating fish or garden plants,” continued Nona.

Initially, the residents themselves did not easily accept the permaculture program, as admitted by Sikun, who initially felt reluctant to join in the socialization activities and the cultivation group in his village. However, over time, when he saw several his village neighbors becoming successful and enthusiastic when planting their homesteads, he became interested in participating and learning.

“I am very grateful for the Assistance Team from BNF, especially Mr. Gugus, who painstakingly guided and directed us in fish farming and permaculture which of course became new things for us, including me who joined recently,” said Sikun.

In the past year, the number of recipients from the assistance of fish farming and permaculture activities in the two villages, totaled 168 people, consisting of 89 people in Petuk Barunai and 79 people in Panjehang. Of these, the majority of beneficiaries are women, who are often housewives. They take advantage of their spare time by gardening and raising fish.

In the midst of difficult times brought by the Covid-19 pandemic, cultivating fish and permaculture in gardens can strengthen the livelihoods of residents in the two villages. This is in line with the program initiated by CISU, of securing rainforests for local livelihoods and building resilience to current and long-term COVID-19 impacts. This program is currently being implemented by BNF in Central Kalimantan this year.

Iskandar (40), one of the leading figures in fish farming and permaculture in Petuk Barunai Village, said that although fish farming and permaculture carried out by residents in his village are still in the early stages, he is optimistic that it will continue to grow. Many residents have already seen the results of their work. The average yield of catfish in Petuk Barunai ranges from 49 kilograms to 150 kilograms per harvest. With the average price of catfish just over IDR 40,000 per kilogram, each harvest period will be a blessing for the residents.

He hopes that in the future there will be more assistance from BNF and the government, on how to process crops so that they have a better trading value, as well as how to carry out marketing strategies. As the volume of harvest increases, he believes, in the future new market niches must be covered by resident fish breeders in his village.

“This is a good start for us here. If the community’s skills improve in cultivating fish and food crops, the benefits that will later be obtained will also be even greater. Especially if we can get a wide market, “said Iskandar.

Iskandar believes that with the benefits obtained from fish farming and permaculture, in the future it can become the main source of livelihood for residents. This will enable people to take part in preserving the forest, and even avoiding economic activities that destroy nature, such as gold mining in river watersheds.