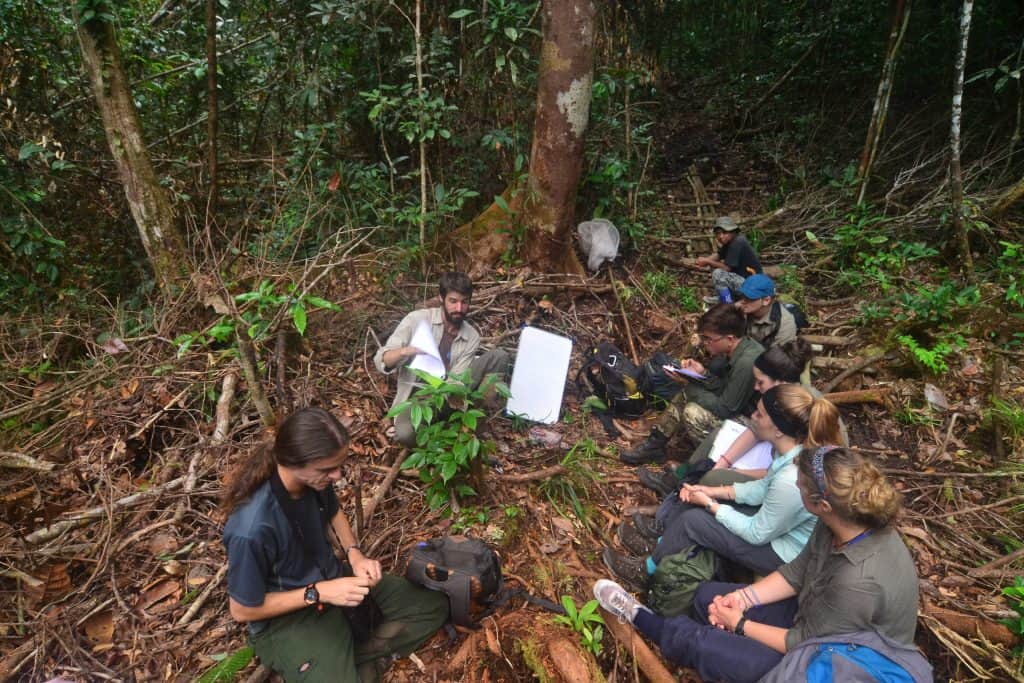 This year’s Rungan Forest Expeditions were joined by volunteers from the University of Exeter (16 students) and 8 local students from Muhammadiyah University of Palangka Raya (UMP) that were divided into two groups. Those two groups of students were assisted and supported by the researchers and field staff from Borneo Nature Foundation (BNF) who guided them into various conservation efforts BNF carried out in this lowland rainforest of Borneo.

The expeditions ran from July to August in one of the BNF’s main research sites, Rungan Special-Purposed Forest (being translated to Hutan dengan Tujuan Khusus “KHDTK” in Indonesian language). Under its KHDTK status, the forest has been defined as the research, development, and education area. Rungan has been a unique forest area as it is composed by three forest types of peat-swamp, freshwater-swamp and dry-lowland, including substantial patches of Ulin-dominated that hold potential richness of biodiversity.

As for the aforementioned reason, volunteers were encouraged to fully participate in the assigned projects. Primariy, research was one that had been highly emphasized during the expeditions. The students were also familiarized with methods for taking the data, putting them into data-sheet, and later discussing them.

Some of the works that the students learnt during the expeditions include plots-forestry, orangutan nest-survey, gibbon triangulation in mixed forest areas called Karangas, phenology plots, acoustic recorders (TBC), dragon and butterfly suveys, fish, ground truthing, camera trap, and litterfall. Most of the students were so much excited to learn and get involved with the projects.

However, the Rungan forest expedition was not running without problem. From the two sides, language has been the critical barrier to communicate complex the ideas between volunteers and the UMP students. After a week passed by, both parties managed to tackle the problem. They started to blend while carrying out the assigned tasks together that then gave the friendship room to take place.

Volunteers were so devoted when doing gibbons triangulation by listening to melodious calls made by these small apes from the tree tops in early morning. As for not so much calls made by orangutan, nest surveys were then carried out to identify the population. Surveying this charismatic ape’s nest has always been a test to any volunteers. Walking through the swampy and spongy peatland made almost everyone fall over and wet more and more. Despite the challenges, the students enjoyed this part so much and had fun with the nest survey activities.

Not only the apes, the students were also excited to discover various species in the forest. They found a huge size of butterfly and were also able to add five (5) fish species into endemic list of peatswamp fish. In addition to that, the students also learnt about the camera trap project in which they saw the flat-headed cat was caught on the video record. It is the second time this small wild cat found on the camera after its first appearance few years back.

Volunteers seem to have fun with local students on traditional games!
Photo by Nittyasa | BNF

Before moving back to Palangka Raya, volunteers participated in education activities with the students from the closest village to Rungan Forest, Mungku Baru. The activities were all arranged by BNF’s Education Team that gave them (volunteers) the opportunity to experience traditional games and crafts.

By the end, giving the universities opportunity to venture the forest on voluntary work, we expect to promote sustainable environmental education and raise the awareness for better management of this forest as it has long been under-studied until BNF’s recent forest and biodiversity conservation through collaboration with UMP. Additionally, BNF has also established partnerships with multi-stakeholders that include industry, government, and local communities in order to bring wider impacts on the conservation efforts to this forest.