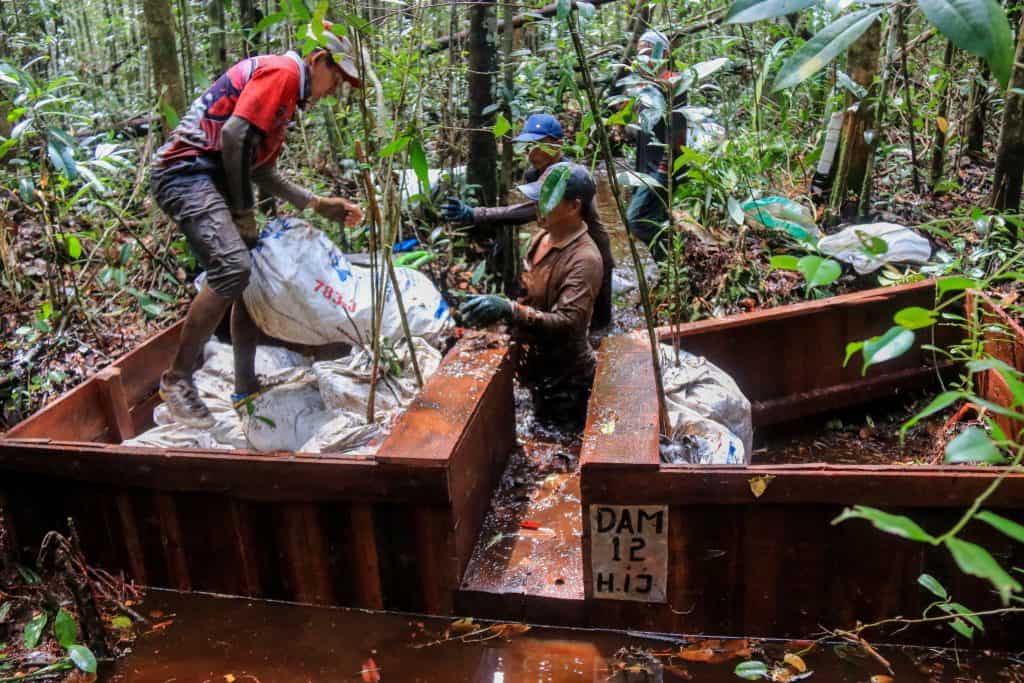 Sebangau National Park is a protected peat-swamp forest in Central Kalimantan and is the largest lowland forest remaining on Borneo.

But, 20 years ago canals were dug into the peat by loggers to float out felled timber before the area gained protected status. Hundreds of the canals still remain inside Sebangau National Park peat-swamp forest to this day. The canals are now draining the peat-swamp and causing the peat to dry out: increasing the risk of forest fires. It has become the biggest long-term problem for protecting this globally-important habitat.

In their natural state, these forests are permanently flooded and new peat accumulates, but when the peat is drained it dries out, oxidises and degrades, putting the whole ecosystem at risk. The crumbling peat surface undermines shallow-rooted trees, and little water is retained in the peat by the end of the dry season.

Dried peat is highly flammable and fires frequently break out in the forest margins and the surrounding sedge swamp, sometimes burning large areas. Huge areas of drained peatland have been laid waste by fires over the past 20 years, representing a true ecological disaster.

Since 2010 BNF has been working with UPT LLG CIMTROP at the University of Palangka Raya to overcome the issue.

Working in partnership, we have built dams to block these illegal logging canals. This slows the rate of dry-season drawdown, thus retaining water in the system, raising the water-table and keeping the peat wetter for longer; it keeps forest litterfall in the ecosystem, filling the canals in naturally; and the dams discourage people from entering the forest to remove more timber. These dams are overplanted with vegetation to create a permanent, living dam. Ultimately, the goal is to prevent fires from igniting and spreading in Sebangau.

We completed the construction of 71 new dams last year and this brings the total number to 756 dams built by BNF and CIMTROP, in partnership with Sebangau National Park Authority (BTNS) on 15 canals with a total of 37 km has been dammed.

We continue to monitor the dammed canals regularly by measuring water flow rate and water tables, and checking and repairing dams as necessary. We have placed water loggers in several dammed canals to record the water level every 6 hours every day.

Last year, we observed the effectiveness of the canal blocking project during the forest fires. There were no fires around dammed canals and the water level remained high: protecting the Sebangau National Park Peat-swamp Forest and its wildlife from devastating fires.

We will continue to build more dams on the longest canal (more than 2 km) in Sebangau National Park Peat-swamp Forest, Canal Bahkan, this coming year. First, we will survey the canal, to check the water loss before any dams are built. The dam-building activity will start again in the next two months and will involve community members from the nearby village of Kereng Bangkirai: providing green jobs and engaging more people in vital conservation efforts.