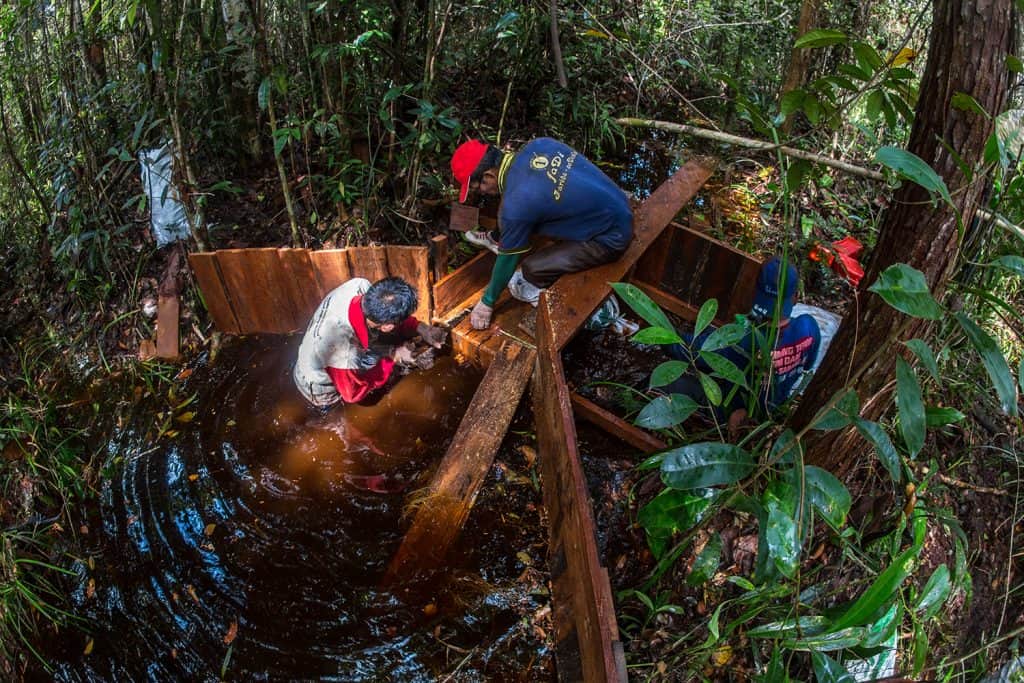 Although there have been less fires in Kalimantan over the past two years due to the effects of La Nina (an ocean-atmosphere phenomenon) causing more rainfall, we have to stay alert and act now to prevent forest fires in the future.

Since the devastating fire season in 2015 that destroyed huge areas of forest on Borneo, our peatland restoration and conservation projects have intensified. Our goal is to restore the condition of the Sebangau National Park Peat-swamp Forest.

In the 1990s and early 2000s a network of canals were dug to remove large timber from the forest when Sebangau was illegally logged. Although logging has come to an end, the canals remain and drain the peat, making the area susceptible to large fires during the dry season. We work to solve this problem by blocking the canals with dams.

Since the beginning of 2017, we have constructed more dams in the LAHG, a special zone within the Sebangau National Park, than any other year since this restoration project started in 2010. On average we have built 86 dams each year from 2010 to 2016. Our target this year was to build 150 dams in 8 man-made drainage canals in Sebangau National Park. We achieved this goal at the end of November.

Canal Bahkan has been one of our biggest challenges! The canal runs almost 5km into the forest and is the furthest canal, from our base camp, that we have been blocking. Transporting the necessary equipment and materials through the forest proved difficult, but not impossible for our team.

Following the construction of the dams, the canals will be monitored regularly by measuring water flow rate and water tables, and checking and repairing dams as necessary. We will be able to show the effectiveness of the dams in retaining water in Sabangau and reducing water discharge-rates.

It has been a successful year for our Conservation Team, but the work is not over. There are thousands of canals in Sebangau National Park, some of which we are still mapping. This work is essential to prevent fires and to keep the forest safe.

“The work that the Conservation Team has done to restore the peat-swamp of Sebangau National Park is an important asset for future generations,” said Yunsiska, BNF’s Conservation Manager.

If you would like to help us re-wet the swamp then please donate here.