Protecting the Rights of Indigenous Law Community Through Recognition of MHA

Hera tells us that the purpose and objective of recognizing and protecting MHA is to create indigenous peoples who are prosperous, safe, and can grow and develop as a community group in accordance with their human dignity, protected from acts of discrimination.

In addition, the recognition of MHA will provide certainty for the implementation of local government responsibilities, to provide recognition and protection of the region’s indigenous peoples and their rights.

The legislation has set guidelines for indigenous peoples to obtain MHA recognition. Consequently, the Palangka Raya City Government and BNF Indonesia held a socialization activity on these guidelines for the recognition and protection of MHA, by presenting parties related to MHA in Palangka Raya. This included the District and Urban Village Governments, damangs and adat mantir. Similar socialization have also previously been held in the Pulang Pisau and Gunung Mas districts. 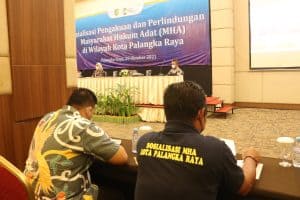 At the same place, the Chairman of the Indonesian Borneo Nature Foundation, Juliarta Bramansa Ottay, said that the government and institutions must work together in establishing MHA. The community should not only be the object of cooperation but must be the instigator.

“Before collaborating with the community, we first help them obtain legal ownership of their land so that they become actors in the management of customary areas later,” he said.

Arta added that clear land ownership levels the community with other parties in discussions and proposals for customary forests, while also strengthening its legitimacy.

BNF Indonesia’s Rungan Landscape Manager, Anugrah Wicaksono, revealed that BNF will continue to assist the community in Mungku Baru Village, along with Parempei Village and Bereng Malaka Village, in the process of proposing MHA recognition. As it stands, the people of Mungku Baru, Parempei and Bereng Malaka are preparing the complete documents for proposing the recognition of MHA, including discussion of customary areas based on the history of the three village communities.

“They have agreed to become one MHA and this agreement was taken based on the history of their origins, which indeed are from the same lineage,” he concluded.

Head of the Environmental Agency of Palangka Raya City, Achmad Zaini, said that MHA in Palangka Raya City is still in the process of establishing MHA institutions. However, because there are areas that fall into the territory of Gunung Mas Regency and Palangka Raya City, this needs to be communicated to the Central Kalimantan Provincial Government.

“The first thing to do is to make sure that the institution is signed as soon as possible. Then the rights of MHA can be protected and should not be ignored- of course, the government must be present and help them,” he said. 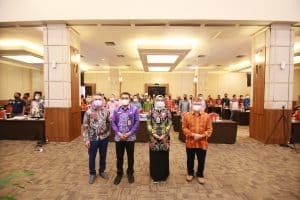 Regional regulations will later become an umbrella to regulate the problem, and the City Government is currently focusing on institutional formation. The main problem is that Mungku Baru Village is regionally included in Palangka Raya City and Gunung Mas Regency.

“In fact, the existence of MHA is also confirmed in Article 18b paragraph (2) of the 1945 Constitution, as a result of the second amendment. This means that the state recognizes the existence of customary law communities and their traditional rights,” he said.

However, in order for MHA to be approved by the Ministry of Environment and Forestry (KLHK), local governments, whether provincial, city, or district, need to form an MHA committee.