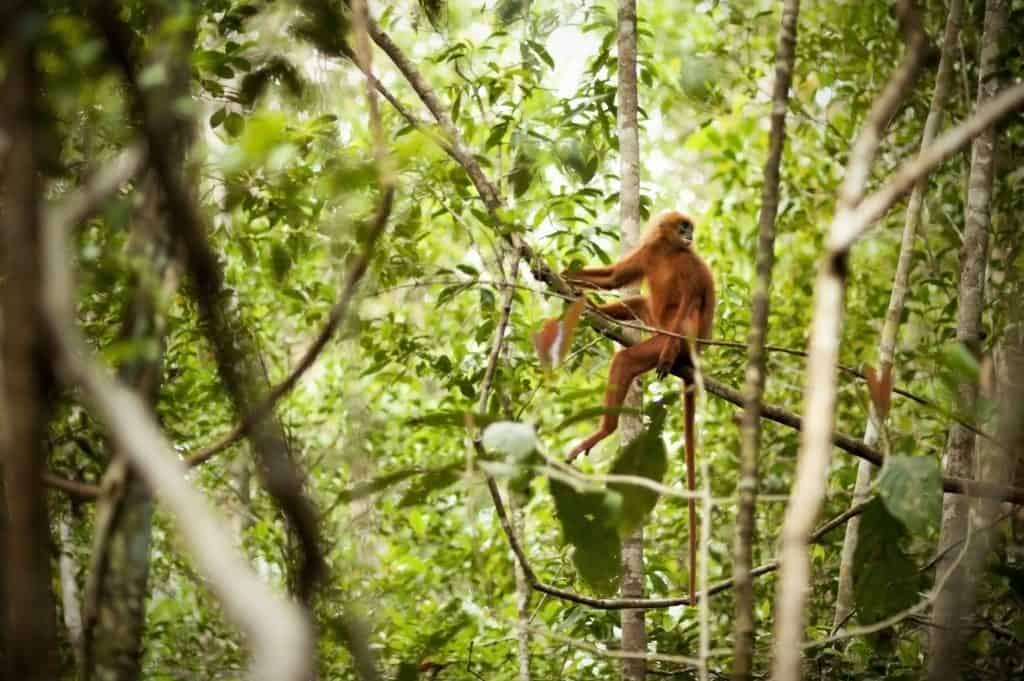 The rainforests of Borneo have many dangers, especially for the more vulnerable prey species. But, these threats may be reduced if different species work together to deter a predator. A new paper, published in the Asian Primates Journal, describes an extremely rare interaction between gibbons, red langur monkeys and a clouded leopard. The two primate species harassed the wild cat, a behaviour known as ‘predator mobbing’, in a cooperative multi-species interaction. Incredibly, this behaviour was caught on camera.

Borneo Nature Foundation’s (BNF) field team were studying wild red langur monkeys as part of their long-term behavioural research project in the Sabangau Forest, Central Kalimantan, Indonesian Borneo. Unexpectedly, the langurs joined a nearby group of white-bearded gibbons after hearing their alarm calls. Together the animals gave out a chorus of warning calls directed at an area of tangled lianas in the forest canopy. It became apparent that the cause of their alarm was a Sunda clouded leopard hiding in the canopy and which appeared to be very alert.

Over a two and half hour period, the primates continuously gave alarm calls toward the leopard, who did not move from his position. The male gibbon stayed within 2 metres of the leopard, while the male langur was approximately 10 metres away. All the females and younger animals stayed in an adjacent tree but directed their vocalisations towards the leopard. The harassment reached its climax when the male gibbon pulled at the leopard’s tail. The gibbons finally left the confrontation and the langurs continued to call out their alarm.

There are two theories about why these primates mobbed the clouded leopard. Firstly, the leopard, a predominantly nocturnal species, may have been sleeping when the gibbons encountered him. The second theory is the infant from the gibbon group was predated upon by the leopard, and this may have led to the mobbing. The infant was last seen three weeks before the interaction, so it could have disappeared at any point after the gibbon group was previously observed. However, the infant was not seen during the encounter and was never seen again.

The more vulnerable gibbons and langurs put themselves in a high-risk situation with the clouded leopard, but it was mutually beneficial for both species to deter this predator. “We do not know for certain if this clouded leopard predated on the infant gibbon,” says Dr Susan Cheyne, Co-Director of the Borneo Nature Foundation and publication co-author. “But if the gibbons and langurs did not work to defend themselves against this predator then we may have seen more casualties.”

J.Zainuddin, BNF Field Assistant and publication co-author, who witnessed this interaction first-hand says, “It was very exciting to watch these wild animals come together and interact in this way. It is something I have never seen before. I think we were also very lucky to get this rare behaviour on camera.”

Dr Cheyne emphasises the rarity of this behaviour,  “Despite collecting over 10,000 hours of behavioural data during 12 years of research on the two primate species in the Sabangau Forest, this was the first time we have witnessed an interaction like this. We normally see the gibbons, the more dominant species, chase the langurs away because occasionally they do compete for the same resources.”

The two species appear to have put their differences aside to come together and deter a predator. Although the fate of the infant gibbon is unknown, the leopard did not show any aggression or threatening behaviour towards the primates during the interaction. Scientists often look to our primate cousins to better understand humans and our own evolution. One thing we can learn from these primates is that strength in numbers and cooperation can be a very effective strategy against a dangerous threat.

Media coverage of this story on BBC Wildlife Magazine and Mongabay.

PrevPreviousRecent Gibbon Population Surveys are a Cause for Concern
NextBeyond Our Imagination: BNF Supports Children’s Imagination Festival in BorneoNext