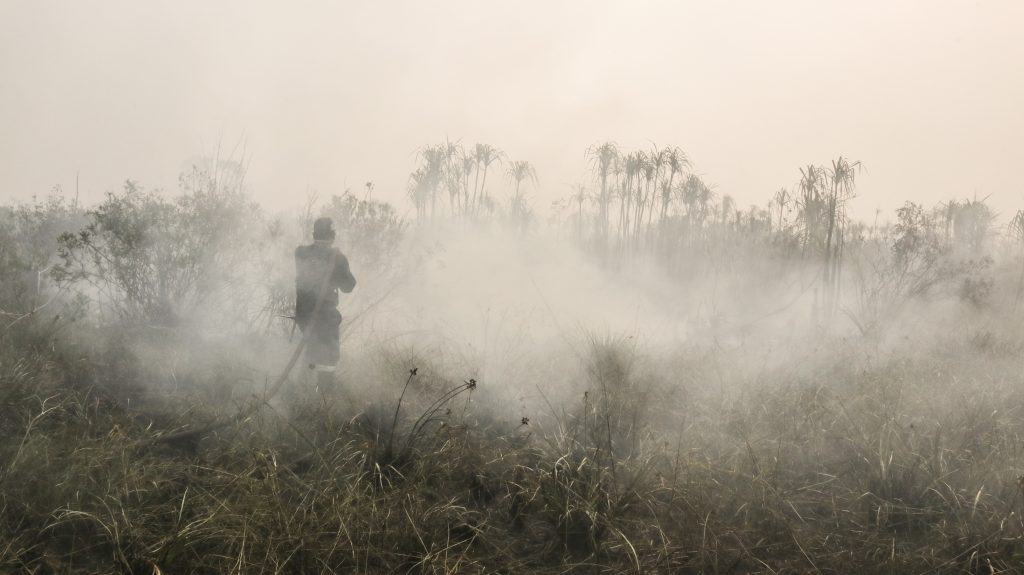 Thick haze and peat forest fires in Central Kalimantan are getting worse, with the extent and intensity of the fires increasing by the day. In August 2019, satellite monitoring identified 13,051 hotspots in Central Kalimantan with Pulang Pisau District and East Kotawaringin being the most severely affected with 5,222 and 2,025 hotspots respectively. In the same period, 593 hotspots were recorded in Palangka Raya, the capital city of Central Kalimantan.

The situation has been deteriorating rapidly and, in the first 10 days of September alone, 16,526 hotspots were recorded, with Pulang Pisau District having the highest number of hotspots at 5,387. Since the first hotspots were recorded in 2019, Palangka Raya has consistently been the most seriously impacted by forest and land fires (karhutla), particularly those burning in neighbouring Sebangau. Central Kalimantan Disaster Management Operational Control (PUSDALOP-PB) data show that, between August and September 8th, there have been 708 fire events engulfing an area of 1,723 hectares in Palangka Raya, and 252 in East Kotawaringin destroying a forest area of 1,358 hectares.

As a result, the toxic haze billowing from the fires thickens and suffocates cities and villages throughout Central Kalimantan, posing a serious risk to health, particularly that of infants, children, the elderly and those with pre-existing respiratory illness. In the city of Palangka Raya in the last two months, more than 2,000 people have been treated for respiratory and eye complaints resulting from the haze.

In an announcement made by the Acting Head of Palangka Raya BPBD, Supriyantodi on September 8th, Palangka Raya city government has officially extended the state of emergency first declared on 28 May 2019 until the end of October 2019. Outer Palangka Raya, the Sebangau forest and Jekan Raya are the most vulnerable areas and have the highest number of hotspots. With a population of well over 200,000 in Palangka Raya alone, the potential impact on human health and livelihoods is significant.

People of Palangka Raya Up in Arms to fight the fire

Now, members of the communities in and around Palangka Raya have banded together to take direct action against the fires. By extinguishing fires before they grow out of control, and by wetting the peat to prevent hotspots from developing into full-blown fires, such groups are making a real contribution to the war on fire. One such group is the Sabaru MPA or Community Based Fire Response team led by Danior Rizart.

Every morning, before going to work, Danior stops at the Masyarakat Peduli Api (MPA) Sabaru Post, just a few steps from his house. The post was originally Danior’s grocery shop but he has now donated the building to be used as a guard post and headquarters for Sabaru MPA.

Inside, the MPA’s fire-fighting equipment is kept in a state of readiness. There are eight water pumps, six of which measuring 4.5 inches, and the other two 6.5 inches. Also, there are 12 hoses, each 15m long, which are neatly rolled up in the cupboard alongside the nozzles and other kits that are essential for effective fire-fighting. Currently, Sabaru MPA is receiving additional equipment donated from several local stakeholders including the government and the local community.

On the walls hang dozens of green uniforms complete with green helmets and reinforced boots. Danior and the 23 members of the Sabaru MPA team are also equipped with a three-wheeled motorcycle for transporting water pumps and other equipment to the fire sites. Most of the equipment was donated by the Borneo Nature Foundation (BNF) with the support of its many donors, both individuals and institutions, who have been quick to realize and respond to the urgency of the situation. “All those who are members of the Sabaru MPA have jobs. So, we joined this really because of our concern for the community and to protect our environment,” Danior said.

Danior has been entrusted by the government of the city of Palangka Raya to be the Head of Post 4 of the city’s peat fire-fighting team with his Sabaru MPA team. Danior leads Post 4 that consists of 14 of his 23 Sabaru MPA members, assisted by 16 TNI soldiers, several policemen, and volunteers on a roster basis to quench the fire in forest area around the city or near residential areas and to rewet dry peatlands

Throughout this year’s dry season, the group will mobilize to extinguish the first signs of fire wherever they occur, be it in peatland or in residential areas to prevent the fires from spreading. Also, the team uses water pumps to wet the peatland to prevent it from catching fire. The water used to wet the land is taken from the nearest river, ponds or ditches where possible, but sometimes the team has to dig artesian wells to access water to fight the fires.

Sabaru MPA activities at Post 4 began in early July. In August the Post 4 team extinguished fires in more than 250 locations in and around Palangka Raya and Sebangau, where each sortie they were able to cover one hectare (an area 100m x 100m). So far they have covered 250 hectares, either fighting the fires head-on or wetting the peat to prevent it from catching fire. Danior said that this year, thanks to the support of Borneo Nature Foundation’s equipment and training, as well as support from local government and stakeholders, his group has become an example for the community and other groups, and has been entrusted by the provincial Office of Forestry to establish and train a further two teams (a total of 14 people) who will be tasked with putting out fires and wetting the peatlands until the rainy season arrives and all fires and haze have been extinguished.

Danior told BNF, based on the example set by the Sabaru MPA group and Post 4, the commitment and enthusiasm of the community to help putting out the fires is very high, but they lack the equipment, training, and logistical support needed to enable them to participate. “We need more water pumps, fire hoses and nozzles, but we also need uniforms, safety shoes and logistical support such as food, drinking water and medicine for current members as well as new volunteers.”

In addition, according to Danior, “Quite a lot of hotspots are located far from water sources so that, for rapid response when attending new fire sites and for wetting the peatland, an additional small truck or pick up vehicle is needed, with the capacity to carry a 3000 liter water tank along with a water pump and fire hose. If the team has that, fire can be extinguished more quickly as they will have more capacity and mobility.” He stressed his point further, “There are many more hotspots than we can deal with while fire trucks and motorized three-wheeled fire extinguishers are limited and water sources are often difficult to find,”.

Danior stressed again that the commitment of the community to extinguish the fires is so high that they are willing to forget the potential impact on their own health by joining the front line of fire-fighters. Danior said, “At present complaints of respiratory disorders and eye problems linked to the haze are increasing among the group’s members. But they only ask for equipment, food and vitamin supplements so they can continue to fight the fires.”

To date, according to the Ministry of Environment and Forestry, based on SiPongi or forest fire monitoring system, almost 45 thousand hectares of peat forest in Central Kalimantan have been destroyed by fire from early 2019 to date.

These volunteers, who came from various walks of life and background have put their utmost dedication fighting the fire on the ground despite the risk to their health. They care not only about their community but also their environment; the forest and its wildlife. Only a sustained attack on the fires, in Palangka Raya and especially beyond, can hope to alleviate the haze, protect their community and save their rainforest. But they can’t fight by themselves. They need help, as helping them will, in turn, help us.

You can also support this critical work to prevent forest fires in Borneo and help protect this globally important rainforest by donating online here. (/esb)