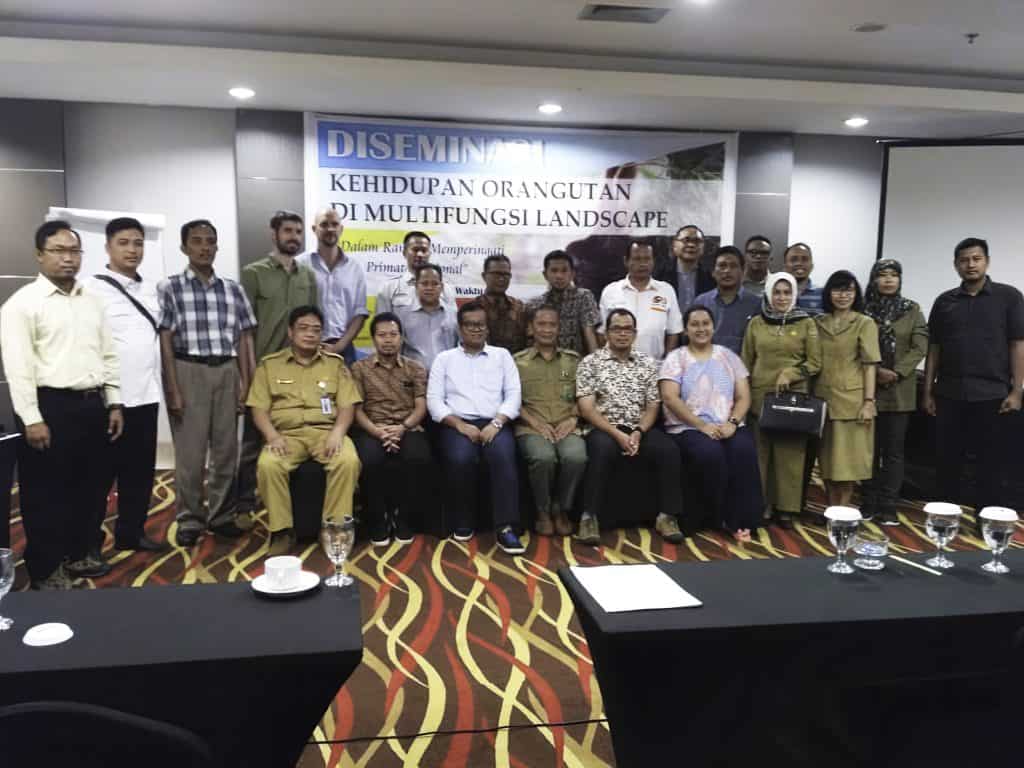 Recently, Borneo Nature Foundation (BNF) attended the dissemination hosted by the Nature Resource Conservation Agency (BKSDA) chapter Palangka Raya (Central Kalimantan) to discuss the critical issue related to Borneo’s flagship ape, orangutan, in multifunctional landscapes. The dissemination to welcome the National Primate Day on 30 January will run in three provinces of Kalimantan with the final event to be hosted in Jakarta in the upcoming February

Through this event, the Indonesian government calls for a joint efforts from all parties which include business operators in palm oil and mining, NGOs, academicians, stakeholders, and other policymakers through long-term commitment to protect and preserve the remaining populations of human’s closest relative that have been listed as critically endangered by IUCN Red List of endangered species.

As widely known, most of the reports have shown that deforestation is one of the major causes that lead to the declining primate population. The fragmented forests have left little space to support the orangutans thus making them hardly survive in the “new” places they never expected. Oftentimes, they were found in a severe condition if not dead when searching food in human settlements.

BKSDA estimates that no less than 80% of a total population of wild orangutans currently live outside the preserved forests. This condition is extremely worrying as this has directly exposed orangutans to conflicts with human. Many reports have shown that the rapid expansion of business in palm oil and mining, infrastructure constructions, and other human-related factors are the major causes that lead to the dramatic decline of this native ape of Borneo.

Suto Suwahyo, The Chair of Environmental and Community Division of the Indonesian Palm Oil Association (GAPKI) Central Kalimantan, uttered that every palm oil company is required to have High Conservation Value (HCV) area in order to pass the Indonesian Sustainable Palm Oil System (ISPO) certification. Failing to meet HCV requirement will result in serious sanctions such as the downgrade of the company’s category or worst; the revocation of the permit.

Based on the latest Orangutan Population and Habitat Viability Assessment (PHVA) in 2016 to which BNF (supported by Rainforest Trust, U.S. Fish and Wildlife Service, Save the Orangutan, and CISU for Initiating the Rungan Landscape Conservation) contributed reports that there are currently about 71,820 individuals of Sumatran orangutans (Pongo abelii) and Bornean orangutans (Pongo pygmaeus) left in the vanishing Indonesian rainforests with nearly 50% of the total population (38,000 individuals) found in Central Kalimantan.

However, the sad story is that some findings also suggest that most of the Bornean orangutans live outside the conservation zones compared to their Sumatran cousins. This then translates into a serious threat for the future of Pongo family.

“This is not only a responsibility from the central government or BKSDA, but the local government should also care about this issue because these orangutans are mostly found in the land allocated for other purposes (APL) areas whose land management is under their (local government) responsibility” said Yayan Rayadin, Research Coordinator from Ecositrop.

For nearly 20 years now, BNF has been working to protect some of the most areas of tropical rainforests in Indonesian Borneo that becomes home to the largest population of wild orangutans. As these Borneo’s flagship apes spend most of their lives in the trees, we can assume that they are very dependable to their forests homes. The loss of these forests will force orangutans to move to other poorer quality habitat and eventually ends up in the declining population.

We believe in the positive, together we can light the hope for the better future of our closest relative and pull them out from the threat of extinction. Join us and be a part of our conservation effort to help protect the orangutan. Learn more how you can be a part of amazing work here