New population of the secretive bay cat discovered on Borneo 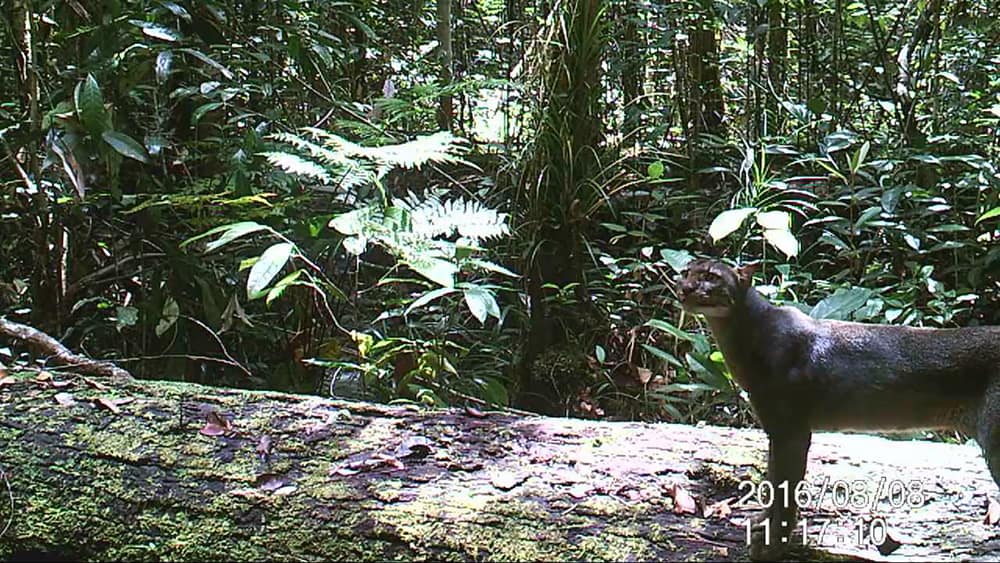 There is little known about the bay cat; one of the five wild cat species found on Borneo. Scientists have struggled to gather basic information on the animal’s biology, behaviour and distribution due to its elusive nature. But, researchers from Borneo Nature Foundation are one step closer to understanding this secretive species. They have captured incredible camera trap footage of the bay cat in a forest, where people thought it did not exist.

Borneo Nature Foundation, working in collaboration with scientists from Muhammadiyah University Palangka Raya, Indonesia and the University of Exeter, UK, carried out wildlife surveys in the Rungan Landscape in Central Kalimantan, Indonesian Borneo. As part of the surveys, 52 camera traps were set up to discover what species live in the forest.

Despite reports that the bay cat (Catopuma badia) is not found in this area, a video of a male bay cat was captured revealing that the species does in fact inhabit the forest. The location of the video was approximately 64 km south-east outside its known distribution range. This exciting discovery was published in Cats News a publication of the Cat Specialist Group, of the Species Survival Commission SSC, International Union for Conservation of Nature (IUCN) this month.

Dr Susan Cheyne, Co-Director of Borneo Nature Foundation and publication lead author, said, “Wild cats can be some of the most difficult species to study in the wild. They are secretive, solitary and highly camouflaged. But, our knowledge and understanding of the secretive wild cats of Borneo is improving thanks to technology, like camera traps.”

“Camera traps give us an insight into the lives of animals that are rarely, if ever seen, by people,” said Adul, Borneo Nature Foundation’s Camera Trap Project Coordinator and publication co-author. “They are an important conservation tool as they can reveal crucial information that can help protect endangered species, like the bay cat.”

The publication’s authors have not released the exact location of the animal as the forest is not protected and the species is threatened with habitat loss and hunting across Borneo.

“The bay cat is a protected species in Indonesia,” said Siti Maimunah, Head of Forestry at the Universitas Muhammadiyah and publication co-author. “Therefore if we are going to protect this species, we also need to protect its forest home. Protecting the forest is important not only for bay cats and other biodiversity, but also for the local communities who surround the forest and rely on its resources, like clean water, fish and wood products, and for their cultural traditions.”

Although this is an exciting discovery, we can’t be over-optimistic. The bay cat is still an endangered species and parts of its habitat are not protected, like the Rungan Landscape, where this male was seen. There is still a lot we don’t know about the forests of Borneo and the clock is ticking. More surveys are needed to understand the distribution and ecological needs of Borneo’s wildlife if we are to save species on the brink of extinction.