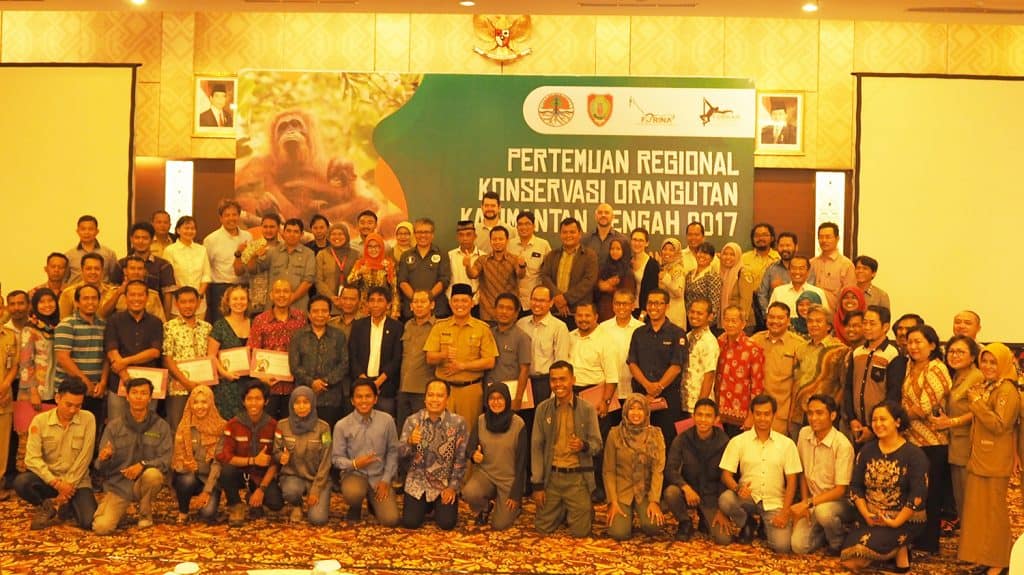 Orangutan Caring Week took place this month with the theme ‘Act Now to Preserve the Future’. This was perfect timing for a Regional Meeting to discuss orangutan conservation in Central Kalimantan, Indonesian Borneo. Borneo Nature Foundation joined the meeting and participated in developing new strategies and an action plan for orangutan conservation in Central Kalimantan.

The meeting was held on 13-14 November in Palangka Raya (capital of Central Kalimantan province). It was a follow-up from a recommendation made during a socialisation workshop in Jakarta during August this year, which presented the results of the 2016 Orangutan Population and Habitat Viability Assesment (PHVA).

Some stakeholders had the opportunity to deliver presentations on the first day of the meeting. BNF Co-Director, Simon Husson, presented an overview of BNF’s activities with a focus on the need to protect forests, such as the Rungan Landscape (one of BNF’s main field sites).

Sawit Sumbermas Sarana, a palm oil company, gave a presentation and asked “Can conservation and business form partnerships?” FORKAH and FORINA also presented the results of the 2016 PHVA and discussed the sustainability of orangutan populations in the next 100 years.

During the two days, workshop participants were divided into four groups to discuss the vision, mission, objectives and targets for Indonesia’s orangutan conservation strategy and action plan for 2018 and onwards. Some of the discussion points were: the need to train local communities to monitor orangutan populations, the implementation of ecotourism and the utilisation of environmental services to improve the local economy, laws and local regulations for orangutan protection, education and handling of human-orangutan conflict, and financial support for orangutan conservation working with the government and corporations.

Fahrizal Fitri, Head of the Central Kalimantan Environment Agency, delivered one of the goals and expectations of this Regional Meeting with the following statement “NGOs are no longer expected to work alone, but together with various parties working for the survival of orangutans.”

He also conveyed the need to publish a children’s book titled “What is an orangutan?” to be used as an educational tool.

An agenda item during the meeting was to select the new Coordinator of FORKAH. Okta Simon from WWF Palangka Raya was elected as the new Coordinator. He expressed his hope for the future of the forum “FORKAH can reach out to all stakeholders so that it can be a forum to listen and be heard in bringing together the vision and mission for the conservation of orangutans.”

He also said future meetings will be held more routinely as many as one or two times per year to discuss orangutan development issues in Central Kalimantan.