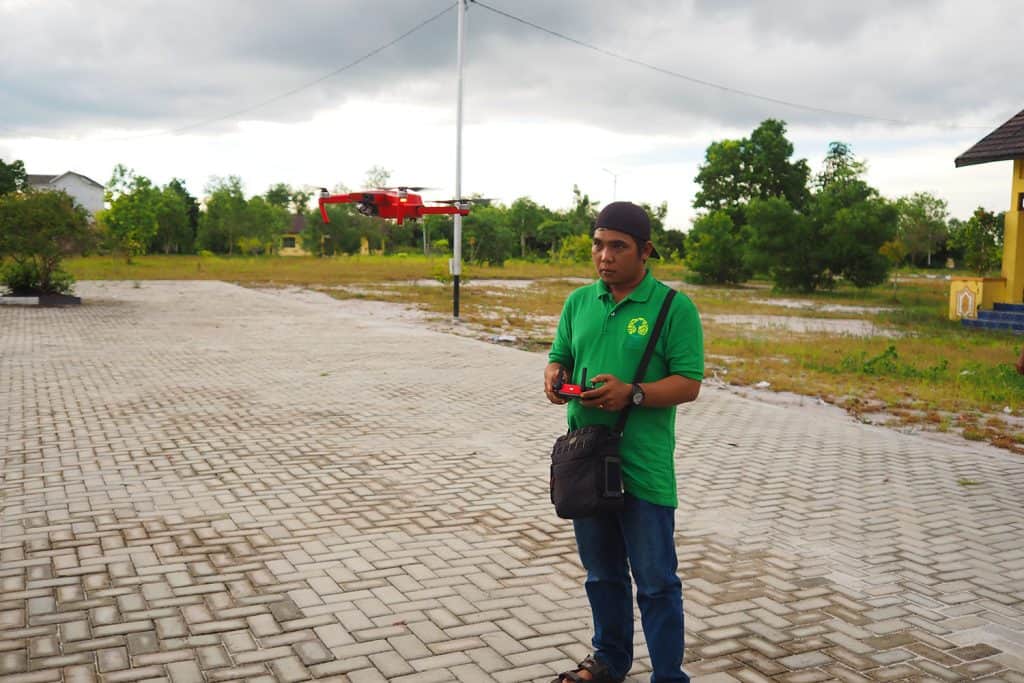 It was cloudy when the BNF Team arrived in the village of Sabaru near the Sebangau National Park, on Monday 26 March 2018. There we saw 13 people already waiting for us. The people are from the Center for International Cooperation in Sustainable Management of Tropical Peatland (CIMTROP) at the University of Palangka Raya and the Community Patrol Team.

The purpose of the BNF visit was to provide practical training on drone aerial surveys to monitor remote areas of the forest and peatland, which are not always accessible by boat or foot particularly during the dry season.

BNF currently receives support from the Indonesia Climate Change Trust Fund (ICCTF) to help protect the forest and peatlands in Central Kalimantan through community-based activities. One of our commitments is to provide workshops and practical training for local communities to use drones, high-tech aerial vehicle capable of doing aerial surveys, to monitor targeted forest areas.

The workshop has been carried out in two parts. The first workshop provided the theoretical basics, while the last one was focused on the practical training for operating a drone.

We were lucky that the cloudy weather moved away as we stepped outside with all workshop participants to test the drone. The participants were seemingly excited during the practical training. Each person had the opportunity to operate the drone starting from unfolding the propeller, turning on the drone, connecting it to the smartphone on the control unit, and finally flying the drone.

Krisyoyo, a representative of CIMTROP who participated in the workshop, says that “the workshop and training is so important for us. Our team are currently fighting against illegal logging, wildlife poaching, forest burning, and illegal fishing in over 50,000 hectares of forest, which sometimes is not accessible to monitor, particularly in the remote areas of the forest during dry season. Learning to fly the drone helps us to reach these spots.”

Krisyoyo added that previously he and his team only used small boats to access the forest. However, during the dry season, 3 kilometres of swamp dries up next to the river making access incredibly difficult.

The same opinion was also expressed by Udin (from the Community Patrol Team and BNF Reforestation Coordinator). He kept his nervous look, even after successfully landing the drone. He tells us that using the drone is a new hope for better forest monitoring.

The workshop and practical drone operation training does not only attract the male team members, but also female members.

Elvi, CIMTROP Accountant, is one of these female members. She says that “I’m so excited to learn to fly the drone and will push more females to get involved in this activity as everyone deserves the right to take a role in protecting the forest. For example by participating in today’s event.”

A total of 17 people joined the workshop and drone practical operation training (10 members of CIMTROP and 7 from the Community Patrol Team). The workshop participants comprised of different divisions from CIMTROP, BNF and the Patrol Team, regardless of gender as everybody deserves the same opportunities to care and take positive action for the environment.

Markurius Sera, BNF Drone Operator, and drone trainer, explains that the aim of the workshop is to facilitate local communities to learn to fly the drone. Therefore, in the future the communities are prepared to carry out aerial surveys of nearby forest and peatlands.

On the first day of the workshop, he also introduced the different types of drones (fixed-wing, code coter, quard copter and phantom drones) to make participants aware of the basic operations for flying the drone. Equally important, Markurius Sera, on behalf of BNF, thanked the ICCTF for their support that allows BNF to use conservation technology, like drones, to give benefit directly to the local communities. (AE)