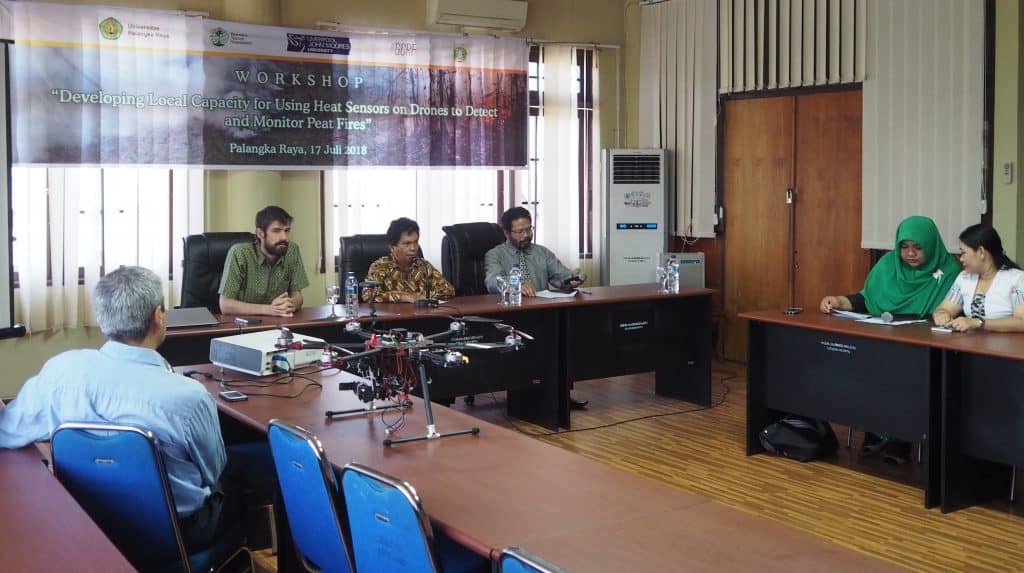 The peat fires have been undoubtedly a long and complicated issue in Central Borneo – a province that is home to 1.574 villages – that should be the largest piece on Indonesian Borneo map! The giant flame occurs as the seasonal and predictable phenomenon in Central Kalimantan. “The medium forest fire seems to occur every 4-5 years, whereas the huge fires sweep every 9-10 years” said Hendri, BNF’s senior field staff.

Following the abovementioned issue, there seems to be an urgency for developing a new technology that could help assisting detection and monitoring of the (possible) peat fires. A technological innovation that could penetrate deep below the surface of the peat to spot heat (of possible fire) and send the data back to the operator for further actions.

Such innovation has been developed by Prof. Serge who collaborates with BNF on a Global Challenge Research Fund (GCRF) grant by modifying six-propeller drone with the installation of thermal imaging and visual spectrum cameras to spot the heat on and below the peat surface that is sometimes left undetected by satelite sensor due to thick smoke or the small fires that limit the sensing.

“We have recently established new fire-fighter teams in the villages of Kereng and Sabaru who later will be at the forefront of combatting the fires. Therefore, now it’s really important for the teams to learn together so that we can put together this drone into use” said Berni, Field Director of Borneo Nature Foundation. 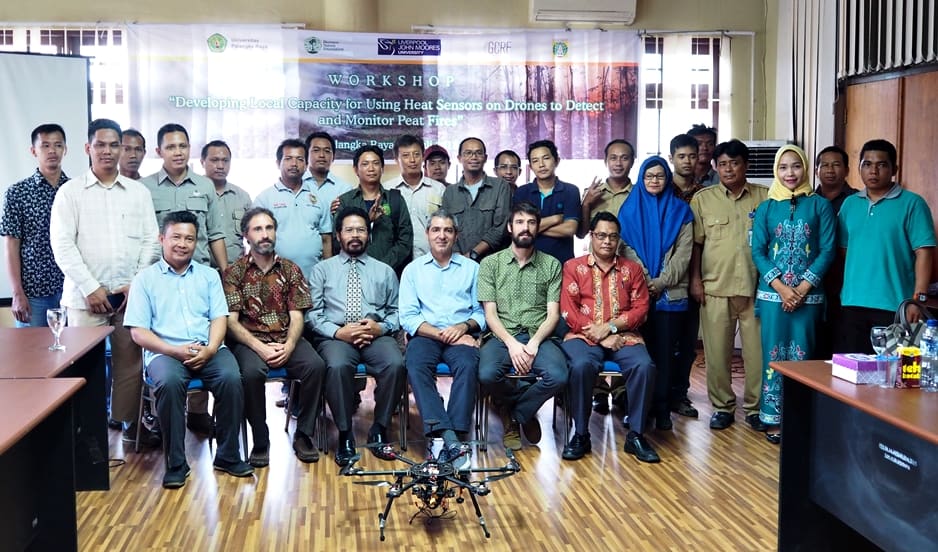 Courageous: Workshop Participants with Prof. Serge, BNF and the drone prototype
Photo by Arapa Efendi | BNF
The prototype has been undergoing several tests before getting disseminated on the workshop. The result is quite satisfactory that it could fly still up to 100 meters high above the spotted fires to detect the heat below the peat surface and send the data in form of infrared imaging back to the operator.

Dr. Mark Harrison, Co-Director of BNF, outlined three goals of the project; 1) to develop thermal imaging to detect the fire spot via drone; 2) test the system in Kalimantan; and 3) to demonstrate the tech to develop the local capacity.

During discussion session, there were several questions raised regarding the future implementation of that unmanned aerial vehicle, some of those are whether the prototype could spot the fire under thick smoke and tight tree covers, integration of the drone with the underground sensors, and data synchronization for the drone from related agencies. 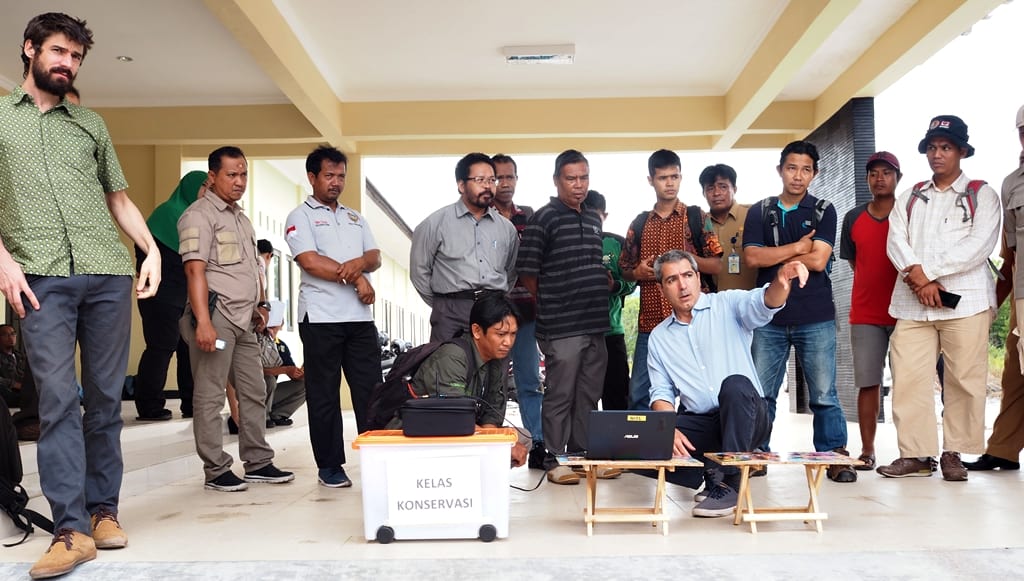 Prof. Serge showed the participants how the drone detected fires
Photo by Arapa Efendi | BNF
“The key for development is to wrk together with people who have the expertise in the field. You need to test the thing in the field and get feedback from people to develop a technology that is in a way useful for early detection of the fires” said Serge to BNF. After presentation, the workshop was moved to the open field at University of Palangka Raya for a demonstration on how the prototype works.

“You really have to listen very carefully to all the teams who work in the field that later use this technology so that it can help you design and define further alghoritm to develop the technology that fits their needs to be used in a larger scale” Serge added.

The development is not without any challenge. The problem lies on the battery life that leads to the short-time flying duration between the range of 10-15 minutes. However, such issue has been previously predicted. The new power source will be developed in the future to make the drone survive longer on the air to optimize its function.

Current prototype has transformed drone into more serious role, making the fire detection and monitoring into a new level. In the future, the function of the prototype is not merely limited to fire detection, but it can also be developed for monitoring the key species, nest surveys, vegetation, biodiversity, and other complex issues within the unaccessible forest areas.

The workshop has shed new lights to local communities on the application of the new technological advances that will help them in the future to fight for the fires. We thank the UK Government through Darwin Initiative that has provided us with generous support making this event possible. This contribution enables us to learn about drone prototypes that could be a future solution for early detection of peat fires in Borneo. (AE)