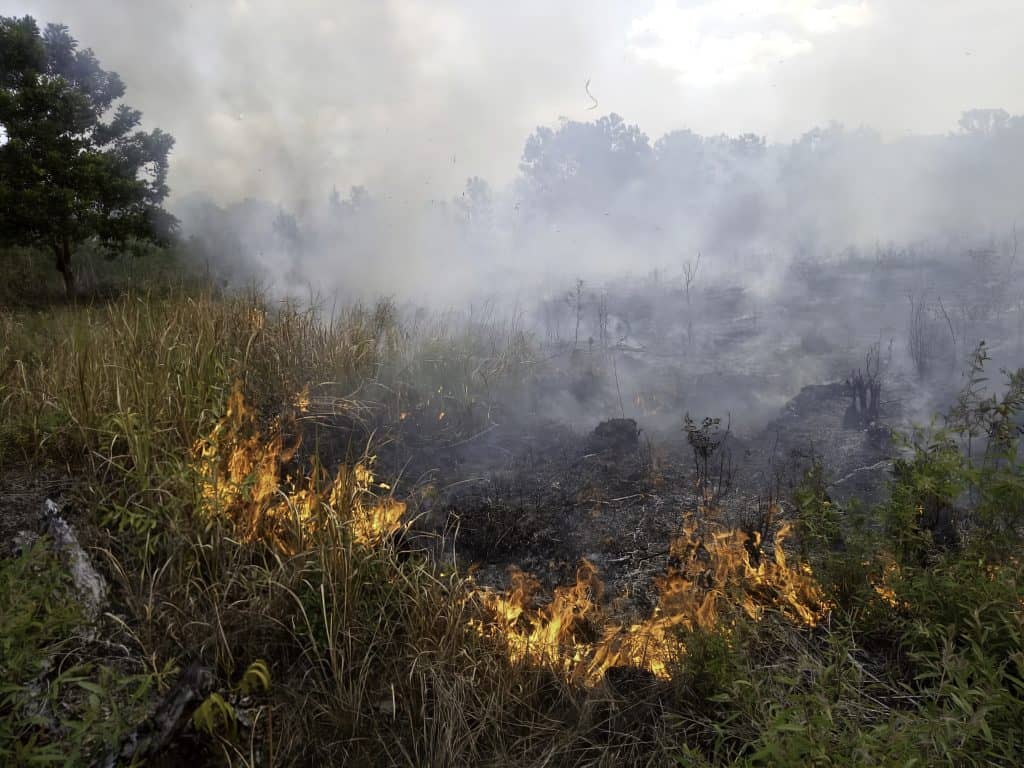 In the sweltering afternoon on Saturday (15/09/2018) the helicopters carrying the giant bucket of water were easily seen to fly across the sky of the Indonesia’s projected capital city, Palangka Raya. These “whirlybirds” were deployed to extinguish massive land fires that recently hit the city.

Following the two-week absence of rain, the giant flame has intensified leaving the city blanketed with the haze. Consequently, the impact of the land fires is now obvious. The current land fires produce the haze that has spread across many areas of the city. If this continues, the effects can potentially be much bigger and more devastating. Even now the residents start to feel the effect of a very strong smell of smog in the midnight to morning.

A member of fire-fighting team combatting the land fire on Friday (13/09/2018) in Palangka Raya
Photo by MPA Kereng | BNF
The cause of this land fires is suspected by intentional and unintentional land clearance by burning the land during the dry season which is worsen by severe dry season. The people who burn the land have neglected the damage that put other lives under serious threats of the smoke haze.

Currently, satelite images captured by Indonesian Agency of Meteorology, Climatology, and Geophysics (BMKG) as of today (17/09/18) has shown a huge potential of land fires in Central Kalimantan where most of the areas are marked red (vulnerable to fires).

To combat the fires, community-based firefighters and the government-related agencies have put solid synergy to fight the giant flames before they spread to a larger scale. The newly established firefighters in the two villages of Kereng Bangkirai and Sabaru that are supported by Borneo Nature Foundation (BNF) have also been actively involved to help fighting the fires. Yet the attempt will never go that easy as most of the areas are dominated by the peatland to which the fire can burn far below the soil surface.

Although forest and land fires are the annual disaster in Central Kalimantan, we will never be a pessimist allowing the nightmares of forest and land fires in 2015 to reincarnate that then leave our beloved children suffocated the poisonous haze. Together with our team, we will put our best efforts to combat the giant flames.

Our firefighters have been on the battle grounds spending their nights and days fighting the fires. You can make donation to support them save their homeland. Your donations will help equip them with proper fire-fighting equipments and increase the number of the team members to combat the giant flame!

We thank our donors (the UK Government through Darwin Initiative, ICCTF, The Orangutan Project, Arcus Foundation, Orangutan Appeal UK, US fish and Wildlife Service, Zoos Victoria and LA Zoo) that have provided us with generous support in establishing firefighting teams that are now on the frontline combatting the fires. Your care and concern about the future of our environment is such a great inspiration for us all.(AE)

Here’s how you can support us!