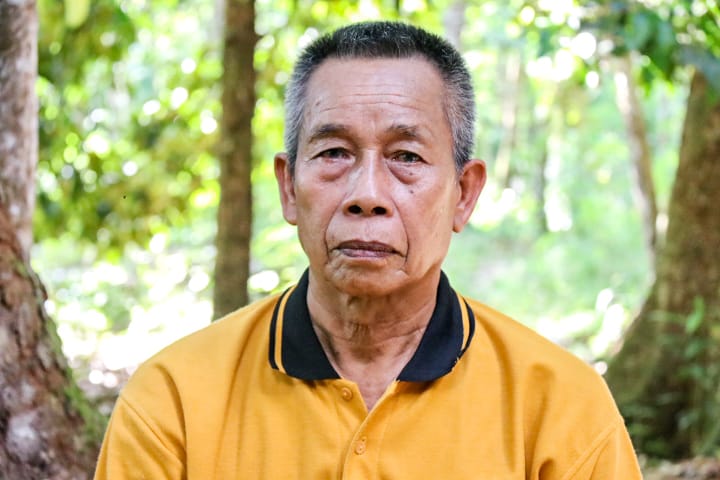 “For Sirun Herman Manan (72), the forest is a paradise for medicinal plants. There, he seeks out medicinal plants to concoct herbal remedies, which can help with everything from toothaches to fevers, and even heart attacks. It doesn’t stop there; he also spreads the “virus” protecting the forest.”  – Dionisius Reynaldo Triwibowo

Sirun is from Tambak Village in the Pulang Pisau Regency of Central Kalimantan, Indonesian Borneo. The village is just under 60 kilometers away from the province’s capital, Palangkaraya City. To reach Tambak, we must cross the Kahayan River, which is about 10 meters wide. From Banama Tingang on the opposite shore, our journey continues a short distance upriver by motorized boat.

During the boat ride, we see machines churning the riverbed for gold. Most of the illegal miners here use mercury in their operations, a dangerous chemical that leaks into the river, poisoning its fish. People in riverside villages, such as Tambak, often rely on fishing as their main source of income and fish traditionally form a core part of their diet. However, the fish here are no longer safe to eat, threatening the health of communities up and down the Kahayan River.

For a long while now, these communities have lived in the shadow of disease. Health facilities can be difficult to reach, especially in an emergency where time is of the essence. Sirun experienced this himself when he had a heart attack in 1986. No one could treat him, not even Sirun’s father, a traditional Dayak healer. “That night, everyone thought I was dead,” he recalled grimly.

At the time, Sirun felt that he had been transported to a dream world. In the dream, he was visited by Gana, a tree-dwelling forest spirit sacred to the Ngaju Dayak people. Gana guided Sirun into the heart of the forest, to a place which Sirun recognised as his village. Here, Gana showed him a medicinal plant with long trailing roots. After Sirun ingested the root, he woke up covered in sweat, and his eyes swept wildly across the room where many of his fellow villagers had gathered. 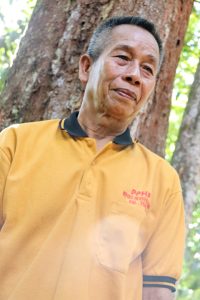 When dawn broke, Sirun and his father headed into the forest, leaving the beaten trail for a route not yet travelled. He opened a path through the thick jungle foliage using a Mandau, a typical Dayak machete, pushing on until “I found the tree; I took the hanging roots,” said Sirun.

From that day on, Sirun became a healer. Every day, hundreds of patients visit him at his home, tucked behind a row of durian trees. At the back of the house, he cultivates various plants collected from the forest, about three hours’ drive away from Tambak Village.

Sirun has never set rates for his services. “Money and material things are not my goal. I just want people to know about the health benefits that can be reaped from the forest, because there is a paradise here that can free us from all diseases,” he explained.

Sirun’s home treatment center has become a haven for the people of Tambak Village, who entrust their lives to his expert care. There is also a small public health center in the village, but no nurses or doctors have called there for the last two years, and nurses in other villages will only visit when contacted by residents.

Sirun and his children often go into the forest to collect medicinal plants together. Sirun records each plant in detail, writing out complete instructions for preparing natural remedies. This will help to ensure that his traditional knowledge is passed down through the generations, as its loss would be nothing short of a tragedy.

For years, the forest around Tambak Village has been relied upon as a “pharmacy” by its residents. However, the local ecosystem is under threat from illegal gold mining along the banks of the Kahayan River. Many people involved in these operations come from Tambak Village themselves, desperate to put food on the table for their families.

To protect their ancestral forest, Sirun and the Village Forest Management Agency (LPHD) formed a plan to prevent miners from encroaching deeper in. A patch of intact forest, rarely entered by community members, became formally designated as a Village Forest to conserve orangutan habitat under the government’s Social Forestry scheme.

In 2016, a decree was issued to establish Village Forests across Indonesia. This way, the forest is legally protected, at least from the threat of conversion into oil palm plantations. In fact, all that separates the newly created Tambak Village Forest from a nearby palm oil concession is a two-meter-wide canal.

From this division of business, explained Sirun, one can see how the Dayak people manage our forests: we utilize all components for our survival.

“But this is not done lightly- to chop wood, we seek permission from the spirits because we believe every plant has a spirit. It is also God’s creation.”

“This forest has benefitted many people, not just the ones who live in this village. If the forest is cleared, we stand to lose all of that. People will get sick again,” Sirun said.

To date, 151 management permits have been granted to communities under the Social Forestry scheme in Central Kalimantan, covering a total land area of 205,381.95 hectares. Through this scheme, the Indonesian government aims to improve the welfare of rural communities and grant them management rights.

For Sirun, the forest must always be a “pharmacy” for the sick. It was among these trees that his people first discovered many herbal remedies, knowledge subsequently passed down from generation to generation. On the verge of death, only the forest’s medicinal bounty could save him.

This article was written by Dionisius Reynaldo Triwibowo, and published in Kompas Daily on October 27, 2020, available to view here or download here