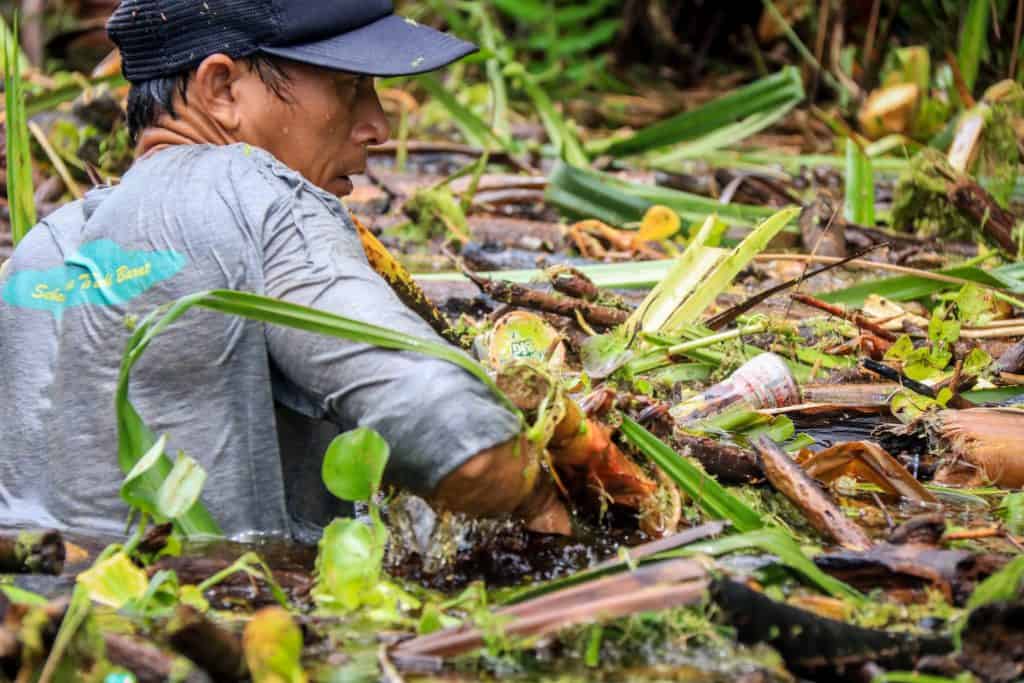 Palangka Raya, Indonesia, 21 September 2021–Last week, a path-cleaning activity was held on the Sebangau River, Palangka Raya City, Central Kalimantan, by the Joint Team from the Patrol Team of the Center for International Cooperation in Sustainable Management of Tropical Peatland (CIMTROP) of the University of Palangka Raya, the Fire Care Society (MPA) of Kereng Bangkirai and Sabaru village, and the Borneo Nature Foundation (BNF) Indonesia. 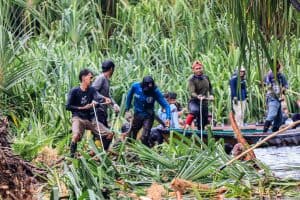 Pampanan or driftwood and piled-up rasau trees (Pandanus helicopus) causing the Sebangau River to be closed. This make it difficult for the Joint Patrol Team to carry out patrol activities, as well as hindering fishermen from fishing in the river.

According to the Conservation Manager of BNF Indonesia, Adhy Maruly, if there is a forest and land fire (kahutla), closures can slow down the Patrol Team’s access to extinguish the fire.

“The pampanan must be cleaned immediately to make it easier for the team to access routine patrols. This patrol activity is carried out to secure the Peat Forest Natural Laboratory area, a special area within the Sebangau National Park, from illegal logging, animal hunting, illegal fishing and forest fires,” he said.

Masyarakat Peduli Api (fire fighting community) Kereng Bangkirai Coordinator, Aditya, adds that the Joint Team involved 36 people in the four-day cleaning activity. The cleaning of the pampanan entails a series of activities for the handling of and preparation for forest and land fire disasters.

“There are several obstacles that we face, but the most difficult involves pulling up the large driftwood that have formed islands of rasau. The more people who help in this activity, the easier it will be for us to clear this path,” Aditya continues. 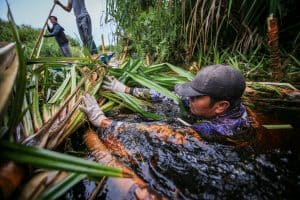 Aditya explained that a large plank covering the river path had to be pulled by six klotok boats. On the second day, the Joint Team received the assistance of two additional klotok, which helped to push the pampanan, making it easier for the team. The tools used are still manual, such as ropes, saws, machetes and wooden sticks.

“After the slab has been moved to the shore, we tie it with thick rope the size of our thumb so it doesn’t drift away and block the river again. Sometimes the rope breaks and the team is forced to dive to tie it up again,” he added.

Arli, one of the Kereng Bangkirai community members who participated in this activity, confirmed that to attach the rope securely, it must be tied at the roots of the rasau trees. Every now and then he throws himself to cut the stump of the rasau trunk so it can reach the root where the rope is tied.

“If it is only tied to the rasau stem, it will usually come off because the stem is easily broken. Instead, we tie it at the root and have to dive a little. The most difficult things are the large rasau islands because we need additional klotok to shift them,” he said.

In addition to making life easier for the Patrol Team, when the river path is clear local community members can go about their daily activities as normal. This is especially important since many people from the Kereng Bangkirai and Sabaru villages make their living as traditional fishermen.

“If the path is clean, then I can also return to take tourists or visiting anglers along the Sebangau River,” Arli hopes.