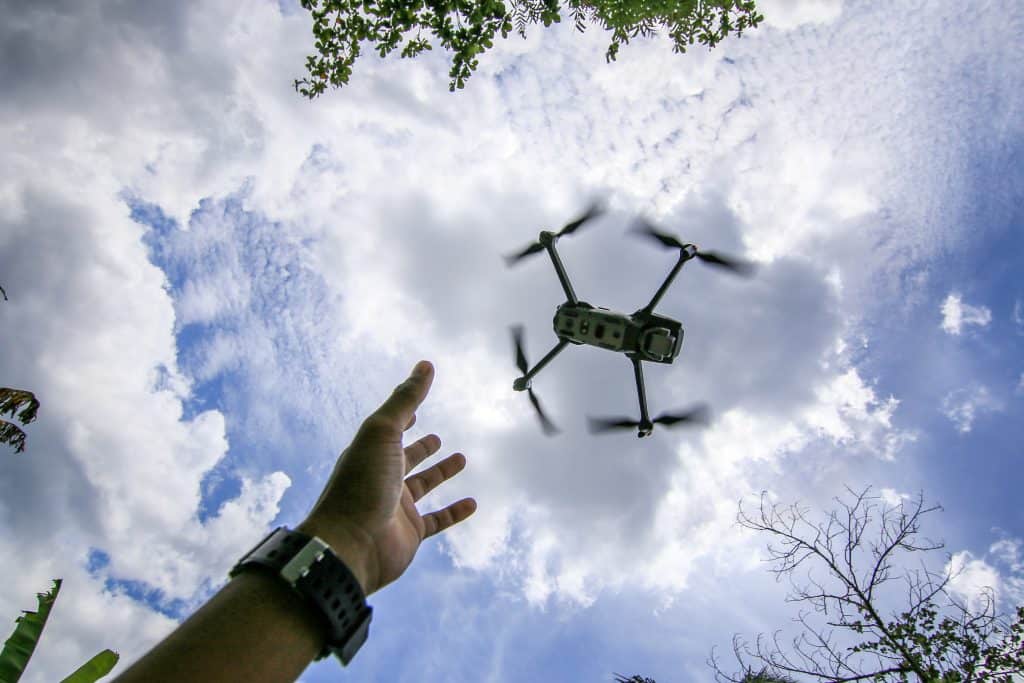 Routine patrols are key to effective fire control and prevention during Borneo’s dry season. As part of our wider fire mitigation strategy, the Borneo Nature Foundation (BNF) conducts regular patrols with our partners at the Centre for International Cooperation in the Sustainable Management of Tropical Peatland (CIMTROP). These patrols are concentrated in fire-prone areas of the National Peat-swamp Laboratory (LAHG), a special zone within the Sebangau National Park.

Patrols are sometimes carried out by klotok boat along drainage canals dug into the peat-swamp by illegal loggers during the 90s. Firefighting activities, including monitoring, are handled by BNF-supported community firefighting teams and the CIMTROP patrol team. Until recently, these efforts were hampered by the challenging terrain. However, with the use of drone technology, teams will soon be able to mobilise quicker than ever.

A drone is an unmanned aerial vehicle (UAV), remotely operated to cover large distances from the air. In the case of fires, this technology allows pilots to maintain a safe distance whilst collecting valuable information.

Drones provide a versatile platform for remote sensing, equipped with an integrated autopilot system, sensors and a GPS receiver. These enable the drones to follow an automatic flight path, which has been pre-programmed.

Restu added that drones are becoming very important to the world of conservation, informing protected area management for long-term successes.

“Drones are playing an increasingly major role in surveys, mapping, monitoring and evaluation, and disaster mitigation. They deliver quick results at a low cost, which is crucial for our fire monitoring activities in the LAHG area,” he said.

“In future, we hope that this technology can be utilised by multiple parties, better coordinating our efforts to monitor and assess fire-prone areas of forest. In turn, this will strengthen our firefighting response by allowing teams to mobilise more efficiently,” Restu continued.

Coordinator of the CIMTROP Patrol Team, Kitso Kusin, told us that patrols were carried out to tackle not just forest fires, but also to deter illegal logging and hunting activities.

In the LAHG, water levels are currently very high, making forest fires a less pressing concern. As a result, patrols have been directed more closely towards preventing illegal activities.

“High water levels like those seen in October greatly minimise the risk of forest fires. However, there is always plenty for our patrol teams to do. Illegal logging is a persistent problem, mostly affecting young or small to medium-sized trees around 3-4 metres tall,” Kitso went on.

Kitso explained that drone technology enables his team to conduct patrols without entering the forest, minimising the risk of facing off directly with any dangerous criminals.

“With drones, the teams only need to patrol the forest edge. If they spot signs of illegal logging, drones are immediately flown over to take a closer look. This helps to preserve the safety of the entire team,” he said.

If the teams come across a forest fire, we can use drones to locate water sources and identify the safest access points for firefighters, Kitso continued. This technology also allows us to home in on fire hotspots and work out the direction of spread, so teams can quickly mobilise to prevent the fires from spreading further. Finally, by coupling the drones with thermal technology, we can map a safe path for the firefighting teams to get out if the situation becomes critical.

“We will continue to develop the potential for drone patrols in tackling forest fires, illegal logging and hunting in the LAHG area, potentially saving many hectares of critical forest habitat” concluded Kitso.