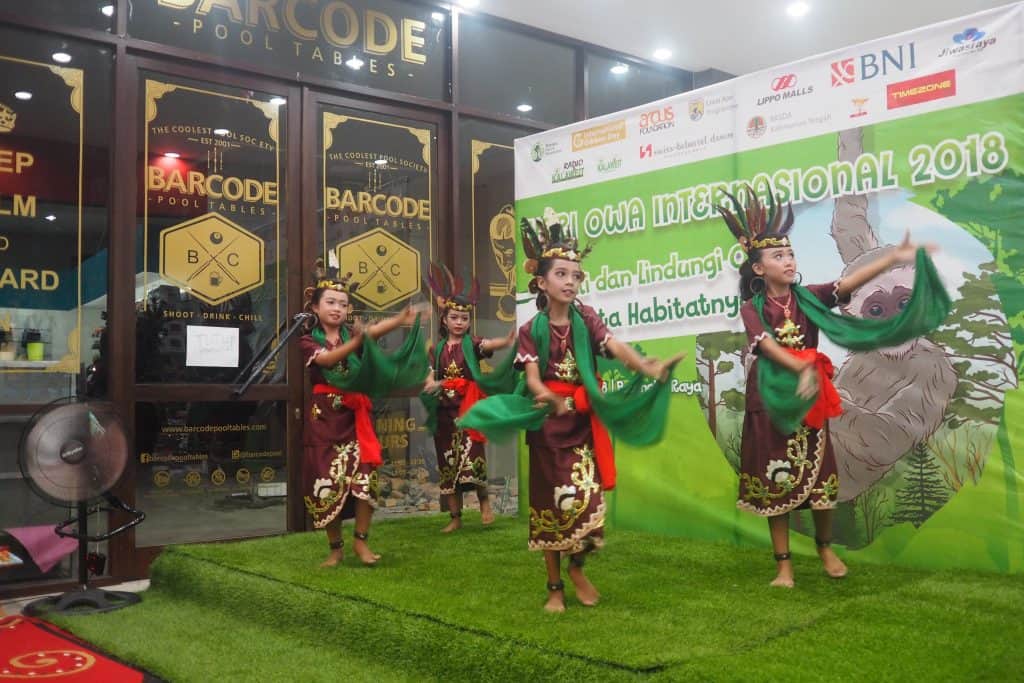 Borneo Nature Foundation (BNF) recently hosted the fourth International Gibbon Day on the third week of october this year in the city of Palangka Raya (Central Kalimantan). The aim of the event that was hosted at Mega Town Square – Lippo Mall Palangka Raya is to increase public (particularly the youngsters) awareness towards the worrying status of the ‘tailess’ ape within massive threats that haunt their presence in the future.

It was formerly initiated by the International Union for Conservation of Nature (IUCN) to mark the biggest date of ‘Year of the Gibbon’ on 24 October which since then is celebrated worldwide where people campaign the preservation of this ‘singing’ primate from continuing threats that they face in their forest home.

Currently, there are a total of 20 recognised gibbon species. Sixteen of them are on the IUCN Red List of Threatened Species. Four are listed as Critically Endangered, 11 as Endangered, and one as Vulnerable. They live in tropical and subtropical rainforests from eastern Bangladesh and northeastern India to southern China and Indonesia.
The special day that was packaged under the theme ‘knowing and protecting gibbons and their forest home’ brought together school children in the city as the target audience through drawing contest. Eka Cahyaningrum (BNF gibbon scientist) and Azis K. (BNF gibbon coordinator) who attended the event introduced the children with the less-known primate called gibbon or ‘Owa’ (in Indonesian language) and encourage participants to participate in protect this ‘singing’ primate by safeguarding the forest home.

BNF also gave the children billingual storybook “The Little Gibbon Who Lost His Song” to the District Library of Palangka Raya. The book was published in 2016 from the BNF big team efforts. The giving of the book is aimed at informing people the amazing forest ‘singer’ that call the forest home. People or children who read the book will experience the feeling of helpless little gibbon who is separated from his family during forest fires in 2015. There was also a story telling session during the event that was performed by BNF senior team member that was adapted from this book.

The top three winners of the gibbon drawing competition are all dominated by female participants. Dena Shakira (11 year-old) aces the competition after her drawing that depicts gibbons swinging on the trees with harmonious human-primate interactions makes her the first winner of the competition followed by Mesya (10 year-old) as the second winner, and Chinsi on the third place.

The local name ‘Kalawet’ is given by Dayaknese to gibbon which is lesser-known to children in Kalimantan compared to Bornean flagship ape, orangutan. In fact, as the ‘people of tomorrow,’ some of them will grow up becoming the policy makers, conservationists, researchers, or in general future changers.
Making this event happen and getting the children involved as the target audience, not only that we have helped raising the awareness of Owa to children but together we have also invested a meaningful lesson that these children need to develop their roles as future ambassadors to campaign the lives of the primate and other animals, environment, and people.

For the success of this event, we would like to thank our donors and supporters that have taken a part to make this event possible. We thank the Arcus Foundation, Great Ape Programme, Nature Conservation Agency (BKSDA) of Central Kalimantan, Lippo Malls, BNI Palangka Raya, Jiwasraya, Kalaweit, Swiss-belhotel Danum Palangka Raya, and Timezone for their valuable support.