BNF participated in the Heart of Borneo Regional Meeting 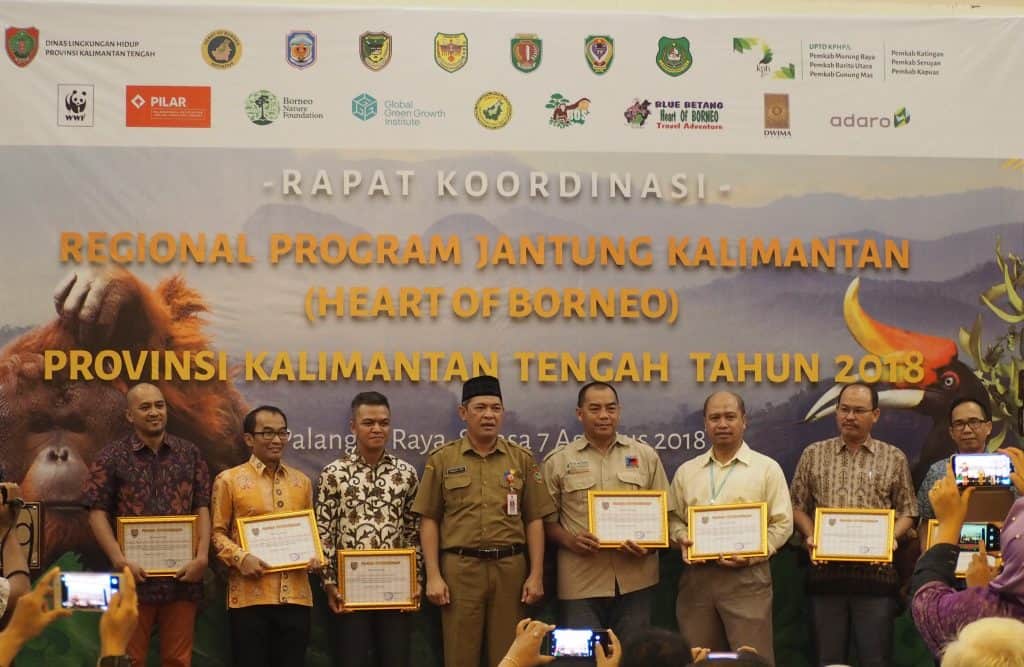 The meeting brought together the central and local government representatives, National Working Group of HoB (Pokjanas HoB), private sectors, and NGOs all over Kalimantan provinces. The purpose of this meeting is to get the recent updates of the HoB initiatives and formulate the best practices that could later be proposed in form of the sustainable policy or regulations to the government. In addition, the meeting will open door for future collaborations between those parties involved.

HoB is the trilateral initiatives signed by the Government of Indonesia, Brunei Darussalam and Malaysia that bring the mission for the sustainable rainforests management in Asia. Given that the Indonesian government has issued president regulation number 3 year of 2012 stating the HoB areas in Kalimantan being a part of the National Strategic Area of Indonesia. These forests are considered to be the largest lowland rainforests reserves in the world and hold important biodiversity treasures. The ‘heart’ forests also serve as the the source of life for thousands of people that depend their life on them, among them are the culturally-rich-yet-vanishing indigenous Dayak tribes.

To date the HoB forests in Central Kalimantan spread in 6 regencies (Katingan, Gunung Mas, North Barito, Murung Raya, Kapuas, and Seruyan). BNF has been taking part in HoB initiatives through its Barito Ulu Programme (PBU). The programme has been socialised in the previous month in front of the stakeholders, local government, and private sectors in the Murung Raya (Mura) regency.

BNF is committed to five objectives through its Barito Ulu programme that will be in turn beneficial for HoB initiatives. The primary goal of the PBU is the contribution towards research and conservation projects in PBU forest that will indirectly boost the profile of Mura regency. Those research and conservation projects are also aimed to provide data of biodiversity trove that could be accessible for research or important purposes, this has been the second of objective of PBU.

The following goal is to develop the networking for collaborative research and conservation projects that will help facilitate the research and other beneficial opportunities. Economically, PBU is also expected to contribute to support the green economy initiatives in the region through community development and livelihood projects. Last but not the least, BNF also seeks for national and international grants to promote and develop the Working Group of HoB.

Barito Ulu as a part of HoB is vital for forests reserves, biodiversity trove, and livelihoods of the local people. Therefore, best management practcie for HoB in Mura regency is deemed highly necessary.

Current data by World Biodiversity Hotspot has shown the importance of this region that hosts 15.000 species of plants with 3.000 tree species of trees, 420 birds, and 222 mammals because 80% of this region is covered with non-fragmented rainforests, a truly ‘heart’ for Kalimantan. However, land conversion and massive exploitation raise the challenges for the region to find solution to protect, conserve, and promote sustainable management of this treasure that will be vital for future generations. (AE)