The ‘big cats’ with clouds; research and conservation of Bornean enigmatic predator 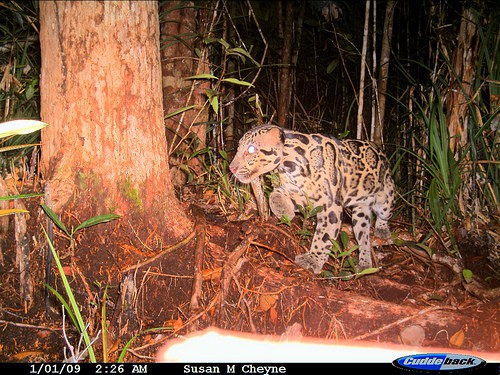 A new paper has been added to the Borneo Nature Foundation (BNF) publication list on Sunda Clouded Leopard (Neofelis diardi). The paper published on Biological Conservation journal is based on our 10-year collaborative research since 2007-2018 carried out in four locations including two Indonesia’s provinces; Sumatera and Kalimantan to which the cats belong to as the endemic species.

The research represents a decade of field work with more than 1,500 camera stations, and many covariates resulting in an impressively robust model of habitat selection by this largest predator of Borneo.

Being the endemic species of the these two Indonesian provinces, the ‘big cats’ are known to be very dependable on the forest. However, they are now under serious threats as their forest homes start to disappear. The IUCN Red List of Endangered species has also reported the population decline of these felids making their status drop to vulnerable.

The absence of comprehensive assessmment of this enigmatic species will potentially block the identification of the cats conservation needs and the room that will play the role to conserve associated forest biodiversity.

In Indonesian Borneo, Dr. Susan Cheyne, BNF co-director, has led teams working in East and Central Kalimantan to compile the most complete set of data for the clouded leopard in Indonesian Borneo. BNF teams have collected data over 4 years, in 8 forest sites with the total 700 camera trap locations.

“We are delighted to have contributed to this detailed paper and to help identify actions for conservation of the Sunda clouded leopard” said Susan.

Our research has shown that there is serious decline of this carnivorous predator which is frequently caused by the forest loss. To illustrate, in four surveyed areas ( All Sunda, Sabah, Kalimantan, and Sumatra), the detection of the clouded leopard has declined sharply due to the heightened deforestation. The finding also reveals that the big cat population were less detected in southern and eastern Kalimantan compared to the surveyed forests in Sumatra and Sabah whose locations are characterized with extensive, contiguous protected areas.

At BNF, we are the first to discover the presence of Bornean clouded leopard with the first photograph of this enigmatic cat obtained in the Natural Laboratory for Peat-Swamp Forest (NPLSF) Sabangau by using remote cameras. Since this first discovery, we have been inspired to go on with the camera trap projects in the majestic forest of Borneo. More and more clouded leopards have been photographed and  recorded in our remote cameras which then allow us to identify potential research of this vulnerable cats.

Adul, BNF’s Camera Trap Coordinator, states that until now this Bornean wild cats are found in Sabangau forest. Camera trap is currently the only effective way to find and identify the distribution of this felid in the forest. Based on his years of experience, Adul asserts that the big cats will tend to travel more during dry season considering less water on the peat ground making the forest areas more accesible to this predator. Therefore, it is assumed that the footage will be richer during dry season.

“Currently we have two new [male] individuals [of clouded leopards] travelling across the forest areas to nearby the camp. We got their footage several times in June to August maybe because it is the start of the dry season” said Adul.

The two new clouded leopard individuals are more dominant according to Adul as they have overtaken almost all territories of the other identified felids that have now dissapeared.

The paper published on the Biological Conservation Journal with the title “Multi-scale selection modeling identififies threats and conservation opportunities for the Sunda clouded leopard (Neofelis diardi)” 227 (2018) page 92-103. Please do support our conservation efforts on the wildlife of Borneo and follow our social media accounts to help  world hear our stories.