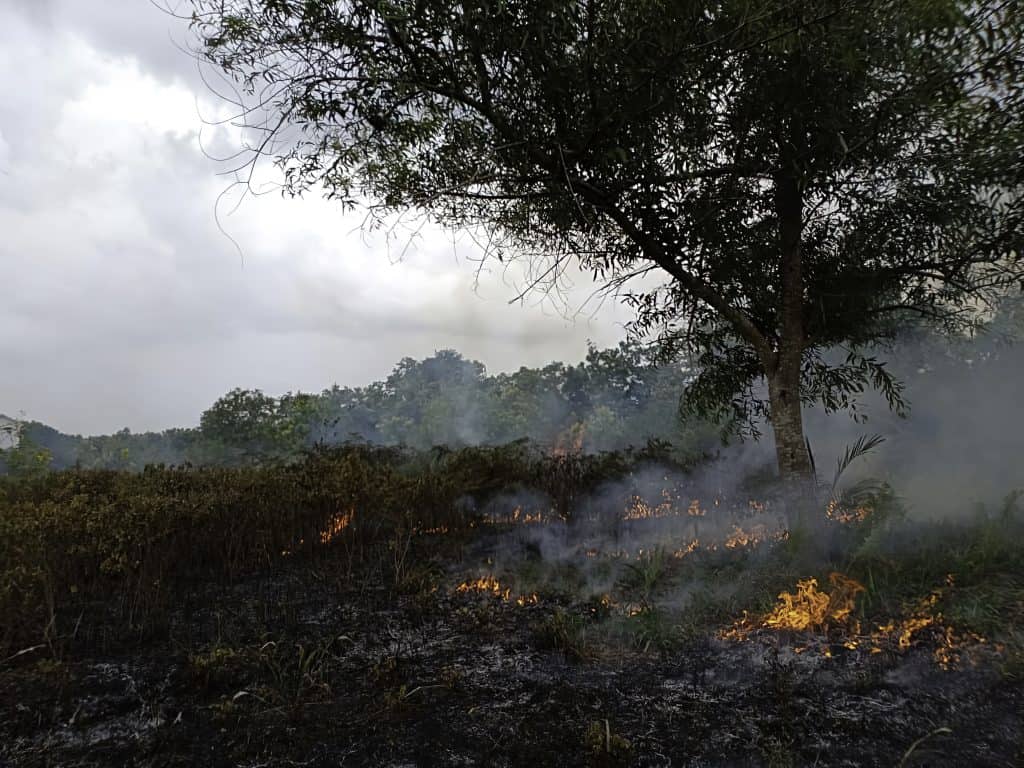 In anticipation of a disaster of forest and land fires in the Natural Laboratory of Peat-swamp Forest (LAHG) a special zone within the Sebangau National Park, Palangkaraya City, Central Kalimantan, the Borneo Nature Foundation is working with the Center for International Cooperation in Sustainable Management of Tropical Peatland (CIMTROP), to construct a number of dams to block several canals in the forest area, to rewet the drained peat.

According to BNF Habitat Restoration Officer, Daniel Katopo, Thursday (27/07/2020), the construction of the dams, which took nine days on July 14-22, 2020, was carried out in the canals of Danau Pancur (6 dams) and Ijas (16 dams). The Lake Pancur canal is one of the target areas in the LAHG forest, and the construction of the 22 dams involves the community members living around the forest, particularly those from the Kereng Bangkirai Village, Sebangau District.

With the existence of the dams blocking the ex-illegal logging canals in the LAHG area, a process of wetting the peatlands will occur, reducing the discharge of water from the forest.

“One of the reasons for peatlands to become dry and flammable is because of the canals that cut through the forest and become a channel for water to escape from the forest. As a result, all water absorption will flow directly into the canal and quickly into the river,” he said.

Forest and land fires are major disasters that recur every year in Central Kalimantan, especially during the dry season. According to data from SiPongi (Karhutla Monitoring System), in 2019, no less than 317,749 hectares of the area in Central Kalimantan were burned down.

Daniel added that the existence of a dam is necessary to control the volume of water in the canal which will increase in the amount of water held in the peat swamp forest.

“The size of the dams will vary greatly, depending on the results of the survey on the conditions and dimensions of the canal. Therefore, in addition to building dams, BNF also carries out hydrological measurement and water depth monitoring activities,” he said.

Idrus Dam Development Coordinator, said, there were several obstacles faced in the dam construction process. During the rainy season, the condition of river water is very influential for the process of mobilizing wood from the port to a predetermined point. The delivery of this material is carried out using a klotok boat and mobilized manually, then floated to the dam construction points by being tied to a buoy using plastic jerry cans.

“It is very difficult and tough in both seasons, be it rainy and / or dry, and if in the rainy season, access will be more difficult when walking because the water is stagnant and it is also quite difficult in the physical construction of the dam due to flood water. While in the dry season it takes a long time because it is far away but the dam construction will be easier,” he said.

Idrus explained, in addition to keeping the peatlands wet, the presence of dams in the canals is also useful as a source of water for drilling wells that can be used for forest fire prevention activities. The dams can also function as a source of water availability for various species of animals in the forest, especially when the dry season arrives and water becomes scarce.

“If there is water like this, the animals often come down to the canals to drink, and besides that, it will be easier for the team to find water sources to extinguish fires when forest fires occur,” he said.

In addition, continued Idrus, the community also benefit from the construction of the dams. People are becoming more aware of the importance of keeping peatlands wet in order to reduce the risk of more severe forest fires. Therefore, this dam construction activity also involved local residents, namely the Kereng Bangkirai people who were close to the forest area.

“We are pleased to be invited by BNF to work together in making this dam. We understand the benefits of why peatlands must remain wet. It turns out that if the peat is wet, the risk of fire is reduced,” said Hamsan, a resident of Kereng Bengkirai Village, Palangkaraya, who participated in the dam construction.

Besides that, added Hamsan, the construction of this dam also provided economic benefits for local residents such as him in the form of jobs that could increase their income.

“Hopefully, the construction of this dam will continue as a way to prevent forest fires. If the forest does not burn, the forest will be even better,” he hoped.