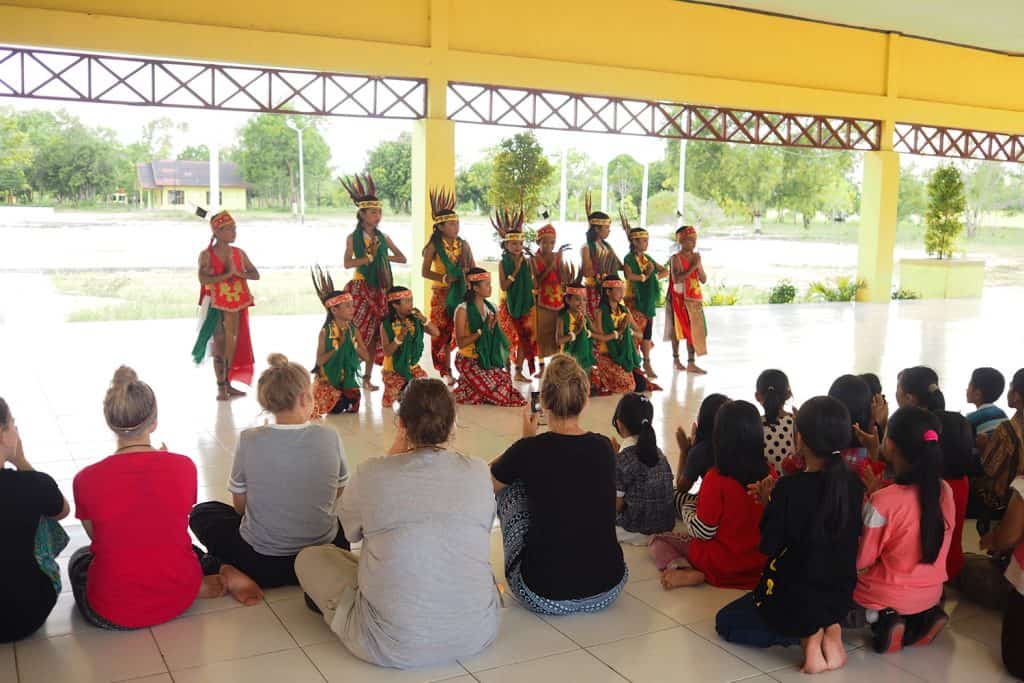 It was one sunny day on Wednesday 4 April 2018 when kelotok, a small traditional wooden boat from the Sebangau National Park forest took the Australian School trip groups back to Kereng Bangkirai Village. The groups of Springfield Central High School and Cleveland District State High School were just back from three wondrous days of forest trips.

Stepping out from the boat, the school groups were curious to see the crowd of local children who gathered around the big bus across the road. Those children wore traditional Dayak costumes that made some students from Australian schools excited to take some selfie pictures with them. Although the children looked nervous, they still tried to use English to communicate with the students.

As we came to the bus, we met a long-haired girl with her green polo shirt and Borneo Nature Foundation (BNF) logo printed on its left chest. It was Angel, an education staff of BNF, who directed the students and the children to get onto the bus that took us to the campsite area of Sabaru village.

Angel explained that the children in Dayak costumes are a group of Anak Sebangau (children of Sebangau forest) from surrounding villages of Kereng. Those children were about to perform the local dance of Dayak to Australian school groups.

“We arranged a cultural exchange activity for Anak Sebangau and Australian school groups so that they could learn together,” said Angel.

The Education Team of BNF arranged a cultural exchange activity for Anak Sebangau and the Australian school groups whose aim was to give the experience for both parties to share and to learn the iconic cultures of Dayak and Australia.

After 15 minutes, the bus finally dropped us at the campsite area. There we saw around 50 Children of Sebangau playing around at the open camp building, their parents, and the other two education officers from BNF. Bima, one of the education personnel, walked to the bus to take some big boxes that consist of the properties used for the cultural exchange activity while another education officer, Riethma, was busy preparing the children to make a big circle.

When the Children of Sebangau were sitting in a circle, the Australian school groups gathered. They put out some stuffs from a large plastic bag like drawing tools (paint colours, small brushes, a mixing palette, and a place for mixing the paint colours), some black and white papers with aboriginal symbols on them, and surprisingly some boomerangs! The Australian students and teachers placed those properties on the floor and soon came to sit together with Anak Sebangau.

Furthermore, Bima, Riethma, and Jen took some snake fruits from tampah, a traditional big plate with a circular shape made of the woven bamboo trees. Each participant at least got one snake fruit to try. There was a funny moment when some Australian students looked cautious with the snake-skin look fruit on their hands but then our education officers could finally convince them to try the fruits.

There were several activities during the event. It started with the traditional Dayak dance performance by 13 members of Anak Sebangau. The children performed the dance very beautifully as the audiences were amazed at dancers’ agile moves. The purpose of this Dayak dance performance was to bring the local arts of Dayak through its dance and traditional costumes to Australian school groups.

Some parents who attended the event were so proud to see their children taking part in the performance. A parent of Anak Sebangau, Mariani, sees Anak Sebangau community bring positive impact to her daughter.

“The community is so positive in a way that my daughter spends her time positively. She learns much about traditional culture. An opportunity like this also helps her build her confidence” said Mariani.

Both children and the students were actively involved in the activities making the event unforgettable. “I love playing with the kids, their behaviour is really good and it’s nice to see everyone engaged in the activity,” said Yu Min, a Cleveland’s Mandarin teacher.

“All interactions were carried out attentively and it’s positive. I tried to explain about the aboriginal symbols of boomerang to children to make them aware of the meaning of it because so far many people think that it was just a thing to throw” Jordan, a Springfield Central High School student, added.

The parachute game was the last activity that the Australian school students and the Sebangau children did for this one day event. Both parties looked enthusiastic to play the colourful parachutes. It was a nice closing game to play that brought everyone to a cheerful end. (AE)