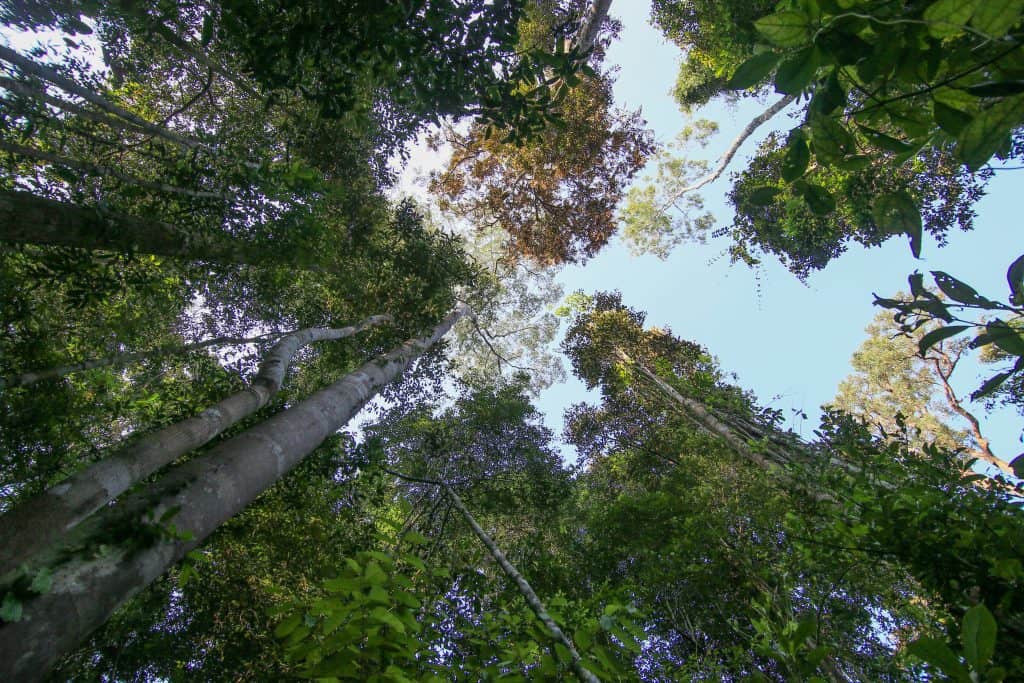 “The spirit never fades although footsteps sometimes falter,” said Kamison while he laughed and continued to trod through the swampy peat path.

For Kamison (44), a resident of Tuwung Village, Kahayan Tengah District, Pulang Pisau Regency, Central Kalimantan, since his childhood, the forest has been a place to make a living. His ancestors taught him how to use what the forest had to offer: foraging for edible and medicinal plants and products, raw materials for infrastructure, and requirements for traditional ceremonies. This is what makes him aware of how important it is to protect the forest. This awareness is now what he is trying to spread to the people in his village, including other villages through his work.

Kamison, his wife and three children live in Tuwung, about 45 minutes’ drive from Palangka Raya City. The village can be reached by road fairly comfortably as the road is tarred. However, some parts of the journey are bumpy as the road has been damaged due to seasonal flooding.

Tuwung is sparsely populated. According to the census data on the official website of Tuwung, the total population constitutes of only 679 people.

Wooden stilt houses with typical Dayak roof ornaments still adorn the houses in this village. Some sandung (traditional Dayak ossuary in South and Central Kalimantan) and sapundu (sacrificial totem pole of Dayak Ngaju people) have been preserved by the people in Tuwung as many of them still adhere to the Kaharingan belief system. This makes Tuwung rich in their ancestral customs.

Kamison works as the Head of the Village Forest Management Unit (LPHD) in Tuwung and as a Village Assistant under the Community Development and Empowerment Program of the Village Government. Currently he assists four villages, namely Tuwung, Sigi, Petuk Liti, and Bukit Liti.

According to Kamison, the village forest area owned by Tuwung is around 1,297 hectares. The area is divided into two different sites. One of the sites is on the banks of the Kahyan river on the opposite side of the village and the other is further away in a forested area.

“The first site is considered as a utilisation zone, it has plants such as rattan, rubber, and fruits that have been planted by our ancestors and are economically beneficial for the people of Tuwung. Then there is the second site which can be considered as a protected zone, where we are currently conducting surveys to identify its potential,” he said while sipping black coffee, last Thursday (29/07/2021).

Kamison said that in this utilisation zone, the community may make use of existing natural resources for their own needs. Meanwhile, in the protected zone, people are no longer allowed to take wood or hunt.

“Actually, people only take what they need, not in large quantities. For example, to make ‘lanjung‘ (traditional top-open backpacks made of rattan), if only 10 pieces of rattan are required, then only that amount is taken,” said Kamison, who has characteristic thick eyebrows.

Currently, Kamison, other members of LPHD and the Borneo Nature Foundation (BNF) Indonesia are conducting vegetation and biodiversity surveys of the village forest to see what and to what extent the forest area in Tuwung can be utilised and protected by the community.

According to Kamison, the ancestral Dayak communities could prosper only by relying on forests. Abundant natural resources are obtained for free. By protecting the forest, he believes that his community will be able to prosper again like their ancestors.

Currently, continued Kamison, the biggest threat is the clearing for oil palm. It is feared that the company’s land expansion will encroach upon the village forest area. However, with the legal basis for village forests, the community has become more enthusiastic and courageous to continue to protect the forest.

Indeed, he admits, there are still some people who take gemor wood (Nothaphoebe coriacea Kosterm.) in the second site of the village forest. Gemor is a non-timber forest product (NTFP) that has many benefits for humans, such as increasing human immunity, as an antiviral, antioxidant, and even has natural insecticide active ingredients that are useful for repelling mosquitoes. However, he added that the presence of the LPHD and other community members of the village in this forest area can also serve as patrolling to monitor what activities are being undertaken in this protected zone.

“If there is forest encroachment from companies or illegal logging, they usually report to us,” he said while pointing to one of the survey teams.

Kamison admits that it is difficult to invite the community to maintain the existing forest. He always faces the pros and cons in assisting the communities in the villages. However, he still strives to increase public awareness and participation.

“This is not an easy matter; the community needs an example of how we can protect the forest. For this, I took several residents of Tuwung to visit the Tangkahen village forest to see first-hand the results of protecting it,” he said.

Kamison added that many people are not convinced that they can prosper economically by protecting forests. In fact, it is possible without taking anything from the forest, and still the community can directly benefit from it, as in the village forest in Tangkahen.

“Forests can be a place of research, ecotourism, and other places of learning. It can generate income for the village and the community as well, of course,” added the man who works as an honorary civil servant.

Finally, continued Kamison, the community has slowly begun to understand and support this effort. Many communities participated in developing this village forest, including the financial support we were able to secure from the village fund budget that partially covered some of the costs incurred for the vegetation and biodiversity surveys. This further strengthens Kamison’s determination to continue to focus and fight for the “groves” of his ancestors.

Kamison sticks to the principle: love your job even if it doesn’t make you rich, at least it helps keep you alive.

“I will continue to help the village government and foster business groups that still exist today even though they are not paid,” he concluded.