FARMING WITH THE ANCESTOR’S WAY 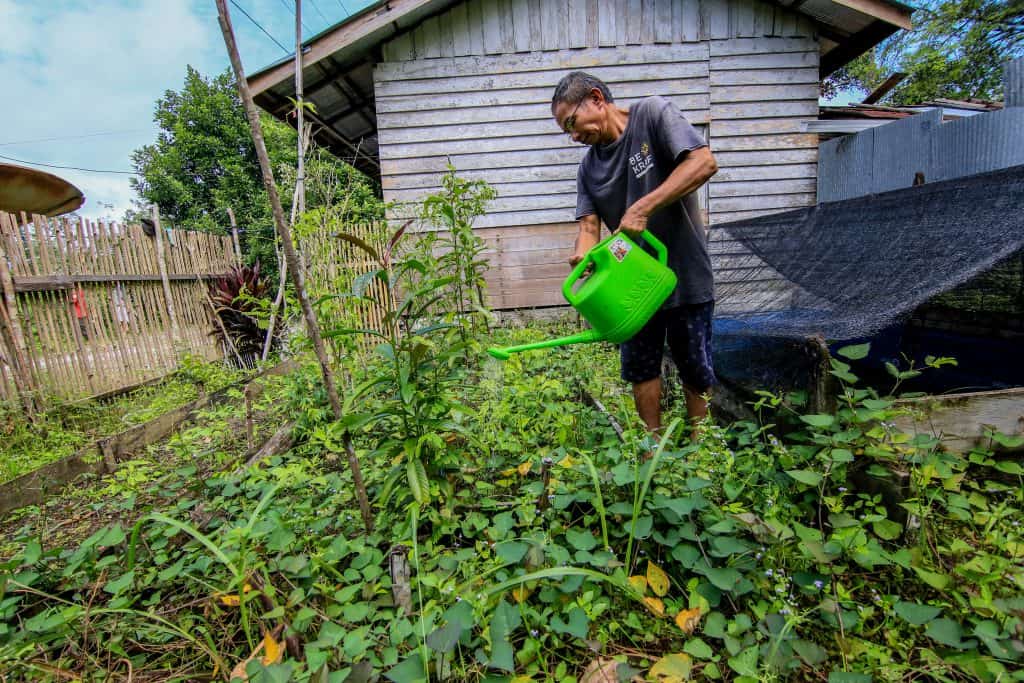 Farming is a way of survival that has existed for thousands of years in the archipelago. There are various types of cultivation methods passed down from generation to generation which were developed based on local wisdom and the principle of harmony with nature. In the midst of the fast pace of modernity, there are some Dayak communities in Central Kalimantan who still firmly maintain ‘the way of their ancestors’.

The Dayak people generally hunt and gather, but in some areas that contain mineral soils they practice shifting cultivation.

Benhard and his family in Tahawa Village, Kahayan Tengah Subdistrict, Pulang Pisau Regency are one of the people in Central Kalimantan who still adhere to this hereditary farming method. Despite his busy schedule as the Head of Tahawa Village, along with his family, this 54-year-old man is still active in farming in the traditional way.

“Besides inheriting the culture from my parents, I also want to have food sovereignty at least for my own family. The rice harvest in my field can feed my family for a year,” he said.

Dayak traditional farming activities, continued Benhard, began with land clearing during the dry season and had to wait for the felled trees to dry completely. This process can take up to one month. The process is also carried out by many people so that when burning it can be maintained so that it does not become a big fire. The result of burning is what fertilizes the soil for farming, such as rice, tubers, vegetables, and fruit.

The biggest challenges are the prohibition of land clearing and the annual flood season which often drowns people’s fields. Cultivators usually begin to prepare fields in September and August, then begin to harvest in September and October.

“Currently, the flood has receded for a long time, so many villagers are unable to farm because their land is inundated by high levels of flooding. If there is no flood and the season is good, usually my fields can produce 1.5 tons of harvest in one harvest,” he added.

Apart from rice, Benhard and his family also grow a variety of vegetables, such as chilies, beans, pumpkins, and cucumbers. He distributed part of the harvest to his neighbors and relatives. This has become a tradition of the traditional Dayak community as part of a form of gratitude and strengthening ties of brotherhood.

Farming in the forest

According to the Lecturer of Anthropology at the Christian University of Palangka Raya, Marko Mahin, the Dayak people use the slash-and-burn system because their shifting fields are mostly in the forest and not in rice fields as is the case with agriculture in general .

“Since the days of our ancestors, the farming system has been shifting cultivation, clearing land by cutting and burning. The process takes weeks and is carried out in mutual cooperation,” he said.

Marko added that field preparation is usually done during the dry season before the rainy season so that when the rainy season arrives the land is ready to be planted. The tools used are still very simple, namely pickaxes, machetes, saws, and tugals. However, with the development of technology began to use chainsaws.

The Dayaks grow rice in the fields by means of menugal, namely making holes with tugals that are shaped like wooden spears. Rice in Dayak culture is not only as food but also has a spiritual meaning. Therefore, rice is often used as a means of dialogue and praying to ancestors.

“Every traditional ceremony always uses rice from superior rice whose seeds are owned by each family or traditional elder who will organize the event. Therefore, rice has a high customary value,” he said.

Benhard and his wife take turns taking care of the fields. In the morning, his wife who usually works in the fields, while he farms in the afternoon after returning from the village office.

“Since the Covid-19 pandemic, I have more free time and I use it for farming,” he added.

Benhard said that currently there are seven heads of families who are still farming in Tahawa Village. In the past, many people farmed in the traditional way, but since the prohibition of clearing fields by slash-and-burn, many residents are no longer farming.

“Our tools are traditional, so if we don’t burn it, it will be difficult for us to prepare the land for fields. If you use modern tools the cost is very expensive. Actually, with the rest of the fire, its function is to become a natural fertilizer,” he said.

Benhard hopes that the ban on clearing fields in the traditional way is allowed or revised again so that many people return to farming. In addition, he also hopes that there will be fertilizer assistance for cultivating communities.

“We really feel the main benefits of this ancestral way of farming. Our family has never run out of rice, even during the pandemic. For the past five years, I have never bought rice. In addition, the forest near us is also sustainable, because we never overuse the land,” said Benhard.