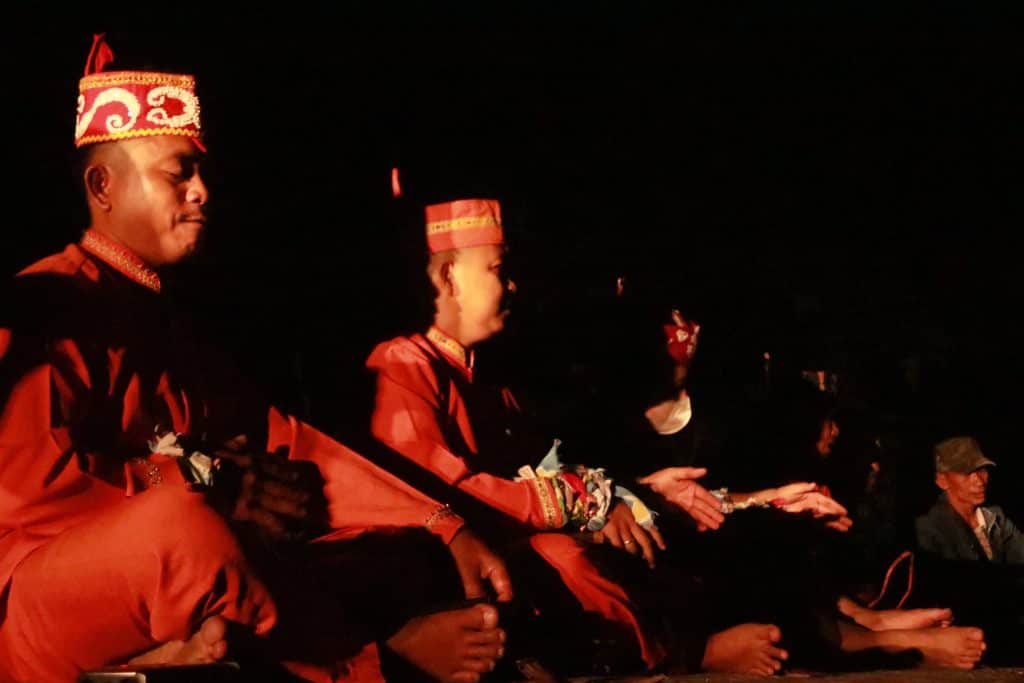 THE IMPORTANCE OF PROTECTING KALIMANTAN’S FOREST

Central Kalimantan, where the rich tropical rain forest still remains, we can still see these traditions. In the prevailing rituals, the restoration of relations with the natural environment is the spirit. In the prayers that are offered, requests to the Creator are made so that they can avoid disasters and negative things.

For example, in Parahangan Village, Pulang Pisau Regency, on the banks of the Kahayan River, traditional events were held for three days in early October 2021.

The ritual begins in the afternoon at the Parahangan Village Traditional Hall. It is marked by the beating of the katambung by Rabiadi, the main basir who leads the ritual.

While playing a musical instrument made of wood and lizard skin, he began chanting a mantra, which was then followed by the four accompaniments of the Basir.

spellrecited in the Sangiang language, an ancient subtle Dayak language which is no longer used in the everyday language of the people.

The ceremony continues by tying a piece of cloth on the hands of the Basir. This is a symbol, a binding petition, so that all beings can be protected from harm.

In an instant, the two youngest basir went around and knocked on the wood that was shaped like a cutting board on the heads of the villagers, this meant that negative energy was avoided from every resident who was present.

After that, it continues with the mamapas lewu ritual. The group of Basir and the elders got into the car like they were going around the village. During the journey, the five basir continued to chant mantras while beating the katambung. The group stopped at the border of a neighboring village, which ended by hitting a bamboo stick on the ground.

This procession ends, when the Basir move to the banks of the Kahayan River and float offerings and wood.

Rabiadi, the main basir of the mampakanan sahur lewu ceremony, tells about the Dayak people whose lives cannot be separated from the forest. The mantra he chants is said to be a reminder, so that humans can protect nature, something that has been the pulse of the Dayak people’s lives for generations.

From his explanation, the emphasis on “pukung pawan” and “nantan long hills, nantan saka rivers, new lakes” guided my consciousness. This is a manifestation of local wisdom’s version of nature protection to protect the inhabitants of the ecosystem. In the country concept it means wildlife sanctuary and protected forest.

The prohibition against disturbing wildlife was also voiced. In the last mantra, the main basir reminded villagers not to eat and kill wild animals for three months. Such as wild boars, monkeys, kahiyu (orangutans), rabbits, snakes, and other wild animals in the forest, are forbidden to be eaten and killed.

In addition, there is also a warning not to just cut down trees in the village forest. This emphasizes the strong relationship of the Dayak community in protecting the forest. Starting from food sources, farming, to medicine, the Dayak people have always relied on the forest like a convenience store.

Born and grown as a unit that cannot be separated from the influence of nature, the teachings of their ancestors always remind them of the obligation to protect the forest and everything in it.

The values ​​espoused in the traditions of indigenous peoples are the basic foundations laid by the Dayak ancestors so that the wild life around them is maintained. Nature is given pause to recover from what humans have taken advantage of.

But how long can he survive in the midst of changing times?

Along with the shift in the livelihood system of the Dayak community, changing from cultivators to loggers in the era of forest concessions in the early 1990s to early 2000s; and followed by land conversion into massive-scale oil palm plantations, prompting a change in the perspective of compliance with cultural practices.

Currently, it is difficult to find the younger generation who have skills in farming, and patterns of interaction with the forest. Instead, the chain of cultural heritage is only in the hands of previous generations who have begun to age.

Most of the younger generation choose to depend on lanting, or gold mining operating in rivers. Mathematically, this will only last for the next 10 years. The rest he only leaves environmental damage.

Another indicator found in villages along the Kahayan river is that there are only a few groups of young people involved in social forestry and ecotourism in their villages.

Not only eroding the core elements of life, the shift in livelihoods also increases the potential for ecological disasters. Finally, the floods that surrounded Palangka Raya City and several other areas in Central Kalimantan in 2021, occurred as a result of poor quality of land and forest degradation.

This heritage of values ​​and traditions does not seem to continue. Many do not understand the history and culture of their ancestors. Even the stories of the elders who rely on life and farming and live from the flow of the river. Because they do not understand, there is also minimal awareness to take care of them.

To bring awareness at the community level, giving their role and acknowledgment of their existence is a necessity. Indigenous peoples need to be involved in managing their natural resources. One of them is through the social forestry scheme.

This, of course, starts with the determination of Indigenous Law Community (Masyarakat Hukum Adat or MHA) decided by the government, regents or mayors, and encourages the existence of local regulations to protect MHA.

With the ratification of these community groups, it is hoped that MHA will have certainty of living area rights. From there, they can manage the forest they still own independently.

Because the recognition of sovereignty is more valuable than financial aid. Awards in the form of recognition will be felt collectively and can revitalize traditional values ​​and orders. For the younger generation, this is a motivation so that they remain enthusiastic, maintain the cultural heritage they have for now and in the future.