VTOL Technology Opens up the Skies of Central Kalimantan 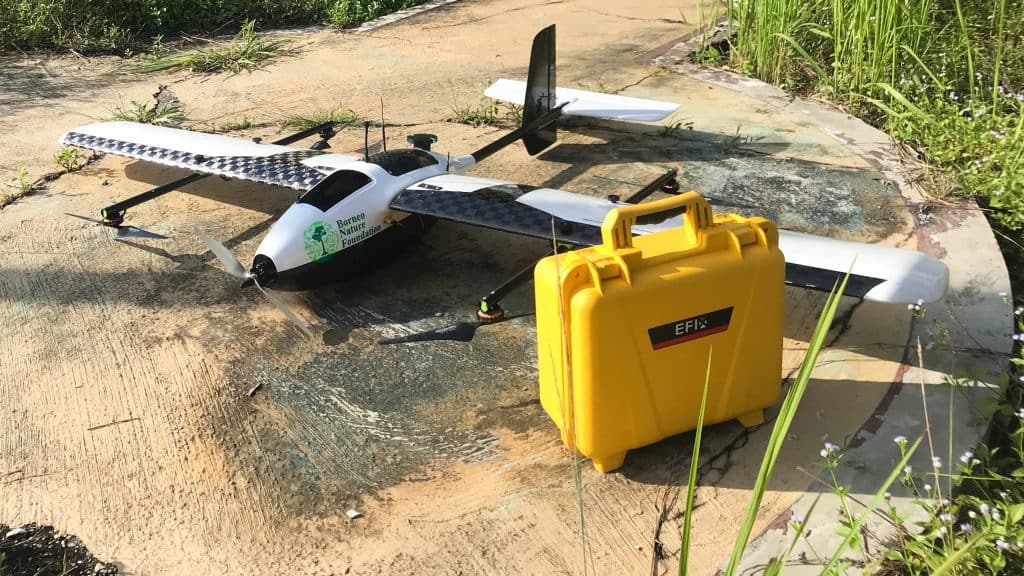 Forest and land fires are an ever-present risk in Borneo, requiring careful mitigation planning for the dry season each year. The greater the threat — one which is increasingly heightened by global warming —the more sophisticated these mitigation efforts must be. Now, with the use of drone technology, fire hotspots can be detected more quickly, allowing us to tackle small blazes before they rage out of control. This is managed by fitting Vertical Take-Off and Landing (VTOL) drones with thermal cameras to measure ground temperatures from the air.

This use of VTOL thermal technology for monitoring fire outbreak points and soil temperatures is the first to be carried out in Central Kalimantan, with drones operated by the Borneo Nature Foundation (BNF) and our partners at the University of Palangka Raya (UPR) and Liverpool John Moores University (LJMU). Pilot tests were conducted between the 14-17th February 2022.

Restu recounted the drone’s maiden flight on February 16th from the Peatland Forest Laboratory (LAHG) in Sebangau National Park, Central Kalimantan: “I had been flying the drone for a couple of hours. During the third hour, the sky turned grey and the wind picked up until lightning began to fork overhead and thunder sounded across the forest. I had to call the drone back, or else it could have been dangerous. We could smell rain and ground temperatures were low so there was little risk of fire.”

The VTOL drone employed by BNF is equipped with a thermal camera to zero in on fires as they happen, both below and above ground. This handy tool can detect fires at ground level even through thick smoke, and differences in peatland temperature enable it to pick up on fires in the underground layer.

“The emergence of thermal VTOL technology provides us with an answer to the shortcomings of fixed wing drones. The VTOL drone used in our recent training broke new ground for Central Kalimantan, where we hope to develop the technology for disaster and geospatial studies through a drone center in partnership with CIMTROP (Center for International Cooperation in Sustainable Management of Tropical Peatland) at UPR,” said Restu.

Using thermal cameras, a VTOL drone pilot can easily detect fires from a wide range of aircraft. It also enables them to identify areas where ground temperatures are starting to rise, causing the peat to dry out and increasing the risk of fire. This way, we can intervene before fires even have a chance to occur.

BNF and our partner researchers at CIMTROP-UPR, Petris Perkasa S.T. and M.T. are exploring several close sensing applications for VTOL drone technology in monitoring land cover, soil and water conditions to assess the health of forests and wildlife.

“This technology can also be used in emergency search and rescue operations by the National Search and Rescue Agency (BASARNAS),” Restu tells us.

By continuing to develop VTOL technology for monitoring conditions in the field, we hope to reduce the impact of fires. The threat posed by fires is a significant one because of the sheer losses generated.

For example, data from SiPongi (Karhutla Monitoring System) reports that no fewer than 317,749 hectares were razed by fires in Central Kalimantan in 2019. You can imagine the smoke rising, bringing with it increased rates of respiratory disease and whole expanses of habitat damaged or destroyed.

LJMU, CIMTROP-UPR and BNF are leading ongoing research on the use of thermal drones to monitor and effectively fight peatland fires; namely, “Experiments in the Automated Detection and Monitoring of Peat Fires using Thermal Infrared Sensors on Drones.” Our current research is focused on refining models of fire detection with VTOL Thermal Systems. The development of this system and assembly of its devices have also been consulted with PT. Nusa Multi Teknika.