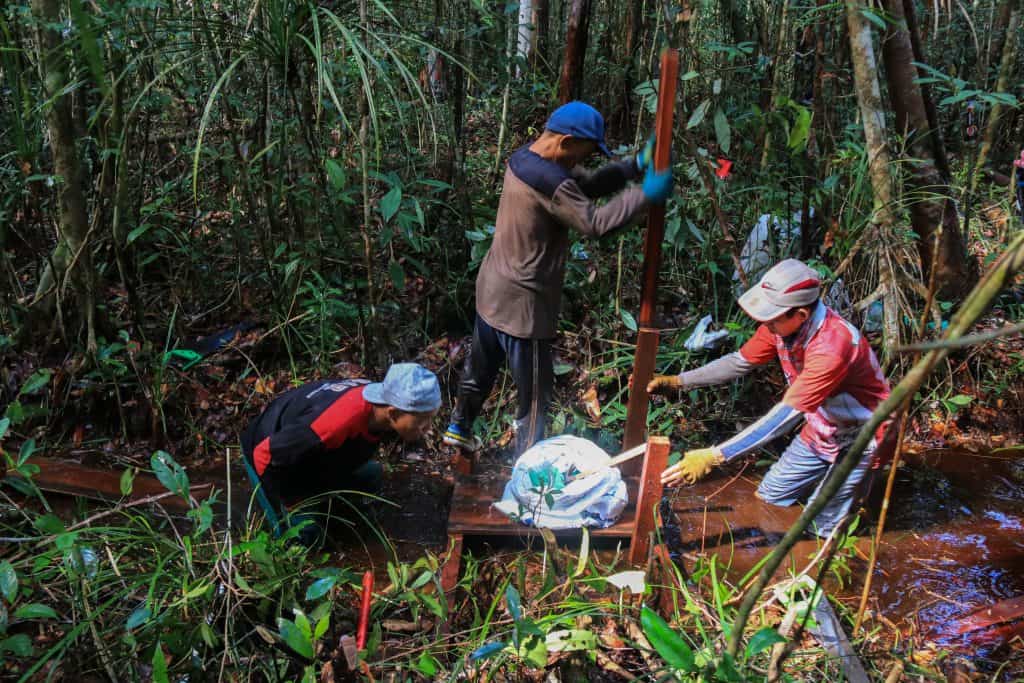 In Central Kalimantan, forest and land fires are annual disasters with wide-ranging and problematic impacts. Its effects become like a complicated tangled yarn. However, in one corner of the Natural Laboratory of Peat-swamp Forest (LAHG) of Sebangau, a special zone within the Sebangau National Park, a group of local residents refused to give up on this complexity.

Supported by the Borneo Nature Foundation (BNF), they work hand in hand to build dams on river channels in the forest area. This is for one main purpose: to keep the forest wet in the dry season to avoid drought and subsequent fires.

“We are very pleased to be involved in this dam construction activity. The existence of this dam is very important for us later, especially so that the forests near us do not burn again,” said Herdi.

Still clinging to Herdi’s memory is how terrible the forest fires in 2019 were. The haze lasted for weeks, with the heat seeping into his village at the edge of the Sebangau National Park peat-swamp forest which partly burned. “We have difficulty breathing, in fact, we can no longer work for a living,” he said.

The forest and land fires in 2019 were one of the worst fire disasters experienced by Central Kalimantan in the last decade. According to data from SiPongi (Forest and Land Fires Monitoring System), in 2019 about 317,749 hectares of area in this province were burned down. Central Kalimantan, in fact, has the second largest area of ​​forest fires in Indonesia after South Sumatra.

The destructive fires that repeat every year encourage some residents on the edge of the Sebangau National Park peat-swamp forest, especially from Kereng Bengkirai Village, to become involved in dam construction.

“This forest is very important to us. We look for fish here to meet our daily needs. If the forest is burnt and damaged, we will definitely lose a lot,” said Abah Rahmat (55), another resident of Kereng Bangkirai who provides transportation assistance for dam construction activities.

About 60 percent of Kereng Bengkirai residents depend on rivers and swamps in the Sebangau National Park peat-swamp forest area. In addition to taking fish, those that work provide water tourism transportation services in peat swamps in the region.

The construction of dams on the canals in LAHG was initiated by BNF in collaboration with the Center for International Cooperation in Sustainable Management of Tropical Peatland (CIMTROP) and the local community of Kereng Bangkirai; in partnership with Sebangau National Park Authority.

Habitat Restoration Officer of BNF, Daniel Katopo, revealed that there are hundreds of dams planned to be built. He acknowledged the construction of dams is an effort to participate in mitigating disasters of forest and land fires in Central Kalimantan, especially in the Sebangau National Park peat-swamp forest area. It is hoped that with the blocking of existing canals in the forest in the LAHG area, there will be a process of wetting peatlands and reducing water expenditure in the ex-illegal logging canals.

“One of the causes of peatlands becoming dry and flammable is the construction of canals. As a result, all water will immediately flow down the canal quickly leading to the river,” Daniel said.

The dams are constructed from wood which is arranged into two separate boxes, which are given a spillway channel at the bottom to keep the water flowing. Each box is about one meter wide and is hollow in the middle to be filled with sandbags. The sacks are then piled up with peat soil and planted with local seedlings that can survive on peatland, such as Kacapuri (Diospyros Kortalsian Hiern).

“The trees planted above the dam are expected to grow big in the next five years and form a natural dam for the channel water flow. Thus, forest wetting will take place permanently and naturally,” said Marta Bina, supervisor of dam construction.

In addition, the existence of dams will provide great benefits for species that live in forests, especially for their main source of drinking water during the dry season.

“The Sebangau National Park peat-swamp forest has become a habitat for many wild species, including orangutans, gibbons, wild boar, forest birds, and so forth. I often find them drinking dam water. It means the existence of dams is very important for the sustainability of the ecosystem in this forest,” said Bina, who is also a resident of Kereng Bangkirai.

However, the most important thing from this dam construction activity is the involvement of the community around the forest. This will provoke the sense of belonging of the citizens to the dam so that they are subsequently willing to participate in maintaining the dam.

“Automatically, it can also foster awareness of citizens to participate in preserving forests and avoid actions that trigger catastrophic forest fires in the future,” said Bina.

PrevPreviousProsperity without Burning the Land
NextExamining the Source of FireNext