Behind the forest guards 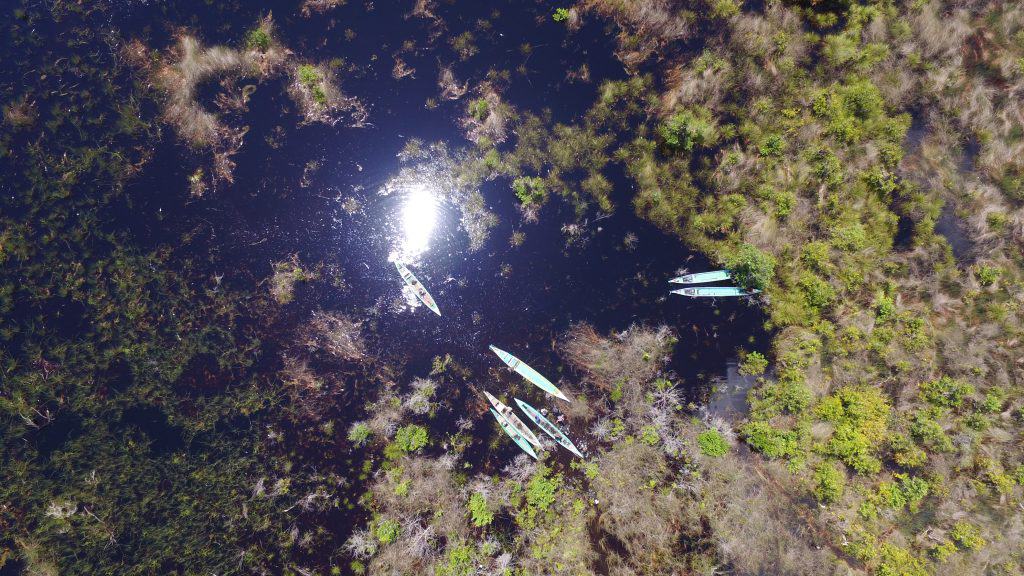 2003 to 2005 was the peak for illegal logging in Sebangau National Park. Therefore, in 2003 UPT LLG CIMTROP from University of Palangka Raya formed a patrol team consisting of local workers from Kereng Bangkirai. Patrols are focused on monitoring land fires, poaching, and deforestation in the Natural Laboratory of Peat-swamp Forest (LAHG) area, a special zone within the Sebangau National Park.

One of the patrol team members named Hendri, started working with UPT LLG CIMTROP in 2003 and then joined BNF in 2013. Collaboration between UPT LLG CIMTROP and BNF began around 2004. One form of collaboration is to protect the LAHG area by conducting routine patrols to secure forests from illegal activities that contribute to forest destruction.

“I joined the UPT LLG CIMTROP Patrol Team in 2003 with a salary of Rp. 500,000 per month. Our first batch consisted of only 3 people, me, Krisyoyo and Martabina,” Hendri said via telephone interview.

He also said that he received training from UPT LLG CIMTROP to become a forest guard in Way Kambas, Lampung. In addition to the peak of illegal logging, that year also ended the illegal logging period in 17 canals constructed around the LAHG camp.

There were many challenges faced by the patrol team while carrying out their duties, ranging from dealing with timber seekers without permission to put out forest and land fires. “In 2003 we once dismantled the tent of a group of wood thieves in the middle of the forest. We reprimanded them but they resisted,” said Hendri.

Hendri added in a serious tone, that it was a very tense moment when facing thieves who were cutting wood using chainsaws and axes, and their number was more than the patrol team. The worst scenario is fighting with armed thieves.

The part that the team fears the most when it comes to patrolling is that in a forest it is past jungle law, he who is strong wins. It is a big risk, and a big responsibility, but the call of the heart to protect the ancestral forest is the reason that the patrol team remain brave and sincere.

“Actually it is very easy to find out whether there is an activity in the forest or not. If there is a boat tied up then it is a sign of the residents who come in the morning and go home in the afternoon,” he said.

However, when the boat is lifted to the edge of the canal and the engine is brought, it indicates the presence of unscrupulous thieves staying overnight in the forest. “Our difficulty is that we cannot take firm action because we do not have a clear legal basis to act upon,” he complained.

In addition to guarding against timber theft and poaching in the LAHG forest area, the team also patrol to detect fires during the dry season. They check each canal channel one by one to the edge of the forest. At present, the team consists of 3-4 people who are divided into 2 patrol teams. In one month the team patrols every day for 6 hours per day from 8 am to 2 pm.

“During the dry season we can help retrieve hotspot information around the LAHG area, so we can move quickly to extinguish fires with joint efforts from the Community Firefighting Team (MPA) and several other teams,” he said.

According to Hendri, the patrol team is not just a regional overseer, but also a firefighting team when fires break out in the LAHG area. Fires that occur can destroy ecosystems and lose key habitats. Reducing the risk of fire by routine patrols is one of the crucial efforts to keep the forest green and natural.

“This forest is home to me, a forest inherited from my ancestors, so I am ready to protect it from people who want to steal forest products. Even if I don’t get any income I will patrol to protect this forest area. The dry season has begun and the team is more often patrolling to prevent forest fires.” he stressed.