Learning Culture with the Spirit of Isen Mulang 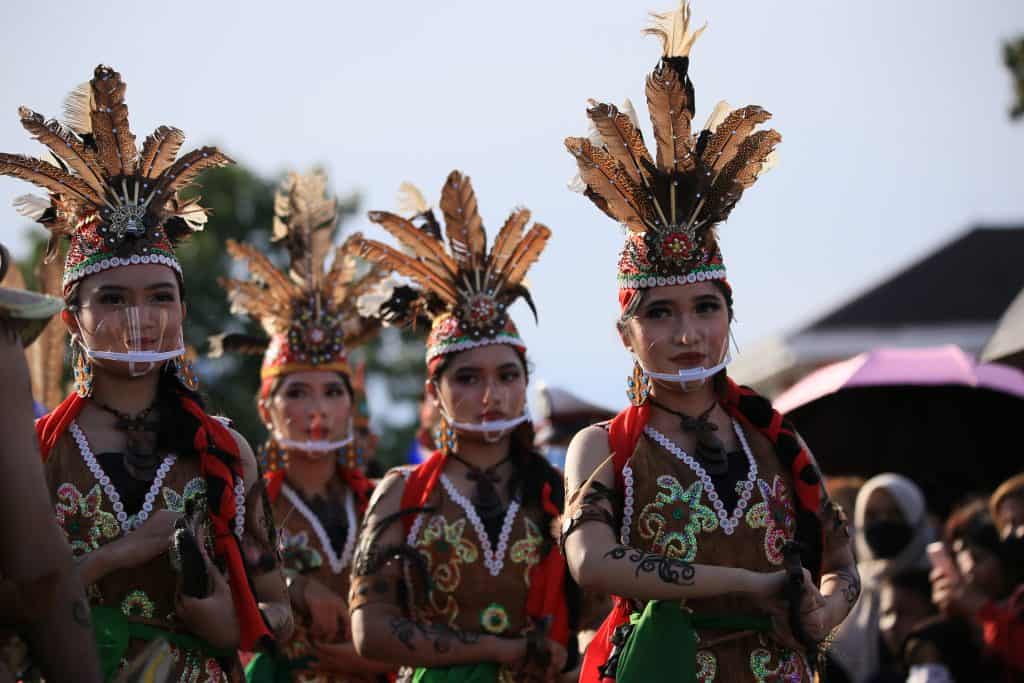 They came on motorbikes, pulling up to meet us in a Palangka Raya City Park. These five young people — Prilicia, Fani, Dian, Hasyim, and Glen — are students from the University of Palangka Raya, each an awardee of the Orangutan Caring Scholarship (OCS) by Orang Utan Republik Foundation the Borneo Nature Foundation (BNF) Indonesia.

As we approached the city roundabout, the students’ excitement grew palpable: this morning marked the opening of the 2022 Isen Mulang Cultural Festival (FBIM), with celebrations planned across Central Kalimantan.

A parade of dancers was due to pass this way shortly, so Prilicia, more familiarly known as Cia, suggested we look for a shady spot from which to watch the festivities. Eager to capture the spectacle, the students also busied themselves setting up a small, dual-lens camera.

After an hour’s wait amidst gathering crowds, a crashing jolt of music signaled that the carnival was about to begin. Soon, a procession of dancers took to the streets in traditional clothing typical of Central Kalimantan’s Dayak tribe.

“Let’s move closer so we can get some good pictures,” said Cia, motioning her fellow students to follow.

A convoy of cars decorated like a large boat emerged from the city roundabout. All around us were red and yellow decorations, and the sharp smell of incense filled our noses.

Kids and adults alike danced through the city center in elaborate costumes of folk masks, bird feathers, and bark.

Cia told us that the FBIM provided an opportunity for her and her friends to celebrate the indigenous cultures of Central Kalimantan, which are starting to be forgotten.

“As well as the dancers, later we will see several traditional competitions such as balogo games, Lawang Sekepeng, Malamang and more. With today’s technology, many young people would prefer to play video games than engage with more traditional forms of entertainment.”

Cia added that the preservation of these traditions needs to start with young people; if younger generations don’t continue the old ways, their children and grandchildren will never know the types of games native to Central Kalimantan.

“Balogo games used to be played all over my village, but now we rarely see them because children would rather play with gadgets,” Cia observed, herself a member of the Dayak Manyan tribe.

The Spirit of Isen Mulang

The Mayor of Palangka Raya, Fairid Naparin, explained that “Isen Mulang” means never giving up. Isen Mulang’s philosophy must be understood and lived up to by the young people in Central Kalimantan, especially those in Palangka Raya.

“This Isen Mulang Cultural Festival is a means to preserve the culture of Central Kalimantan so that it can be maintained and showcased at a national and even international level,” said Fairid.

Fairid continued that we must practice the spirit of Isen Mulang in everyday life. The Dayak people do not give up easily and neither should we when it comes to preserving the rich variety of cultures in Central Kalimantan, as demonstrated today at the Isen Mulang Cultural Festival.

This cultural event is well-attended by the people of Central Kalimantan, with others travelling long distances from outside the province to see the traditional dances and games on display. “FBIM is held every year, starting in 2007, but in 2020 and 2021 the festivities could not take place because of Covid-19. Now, we can finally host the festival again and revive the spirit of Isen Mulang for all the people of Central Kalimantan,” Fairid concluded.