It is a cloudy afternoon, and the sky is grey over the dark black Sebangau River. Rows of rasau trees (Pandanus helicopus) line the riverbank like a wall, bordering a peat swamp behind.

Dry trees can be seen on the riverbank, remnants of former forest fires in 2019.

Occasionally, fishing boats glide by, traversing the smooth surface of the river like motorbikes on an asphalt road. About 20 minutes downstream by klotok boat, you will arrive at the Tukung River, Sabaru Village in the Sebangau District of Palangka Raya City.  A wooden hut with a blue tarp roof stands out starkly amidst the green and black peat swamp. 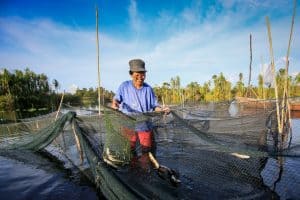 On the riverbank overhung by rasau trees, middle-aged woman lifts her net to catch fish. As soon as she saw my arrival, she greeted me. She is Santi Ahat Bangkan, a traditional Dayak fisherwoman. The Dayak community live in watersheds, using traditional fishing methods that are environmentally friendly. In this way, Santi continues what her ancestors inherited.

Apart from being a fisherwoman, she also works as a member of the Community Nursery (CN) of the Sabaru Borneo Nature Foundation (BNF) Indonesia. While looking for fish to eat, Santi came to the forest along the river to pick up seedlings for our planting programme. This tree replanting programme in the Sebangau National Park Forest is one of BNF’s projects to reforest fire-damaged areas of the park. The programme supports forest restoration efforts carried out by the Sebangau National Park Agency (BTNS) and, in its implementation, involves communities living around the forest, particularly from the Sabaru and Kereng Bengkirai subdistricts. Santi is one of the residents involved in this programme through the nursery community, formed by BNF.

“Currently, few fish are caught, and the community cannot improve their fishing gear. Oftentimes, torn nets are left unattended and cause many fish to die without being harvested,” she said, while lifting tempirai or fish traps from the wire. 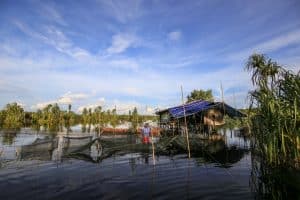 Actually, the tools used by fishermen in the Sebangau River are environmentally friendly. Some use bubu (bamboo fish traps), lambbau (fish traps like fences that end in a net), renggek (fishing nets stretched across the bank), and rawai (hooked fishing lines).

“As long as I have been a fisherwoman, I have never burned forest to find fish. If it is burned, there will be no place for the fish to take shelter and lay their eggs. I don’t agree with this method because it can be destructive, while we fishermen are actually preserving the fish for future generations,” she adds.

According to Ibu Santi, the land in all its abundance is a legacy from her ancestors that must be looked after responsibly. From this black river, fishermen reap their livelihoods.

“As long as I am healthy, I will take good care of it, lest anything damage, burn, stun, or even poison. We have to preserve the fish in this river because they are our lifeblood,” she concluded.

The veins that must be guarded

Anthropology lecturer at Palangka Raya Christian University, Marko Mahin, states that the Dayak people see rivers as more than a mere element of their environment. Dayak communities rely heavily on rivers as access to transportation, water sources, places to find food or source their livelihoods, and as a platform for traditional rituals.

Ancient people considered the river important because they interpreted it as a pathway to heaven. “Many traditional ceremonies are carried out in rivers, such as escorting the spirits of the dead. After the tiwah ceremony, the basir, or traditional leaders, will pray and perform rituals on the banks of the river,” he said. 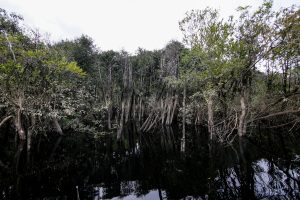 The important value ​​of this river gave rise to customary law for those who damage it. Long before the 1945 constitution was formed, customary law already regulated people’s lives, preserving the river’s health for use by all living things.

Marko adds that the river is like a vein and the forest is the heart. When the arteries are damaged, the heart slowly stops functioning. A heart that cannot function inevitably leads to death.

“Forests upstream are the heart of life in this area of Central Kalimantan, and rivers are the pulse. If one of them is damaged and no longer functions, then we and our children and grandchildren cannot live anymore,” he concluded.