Stepping Towards on The Borneo’s Last Fortress 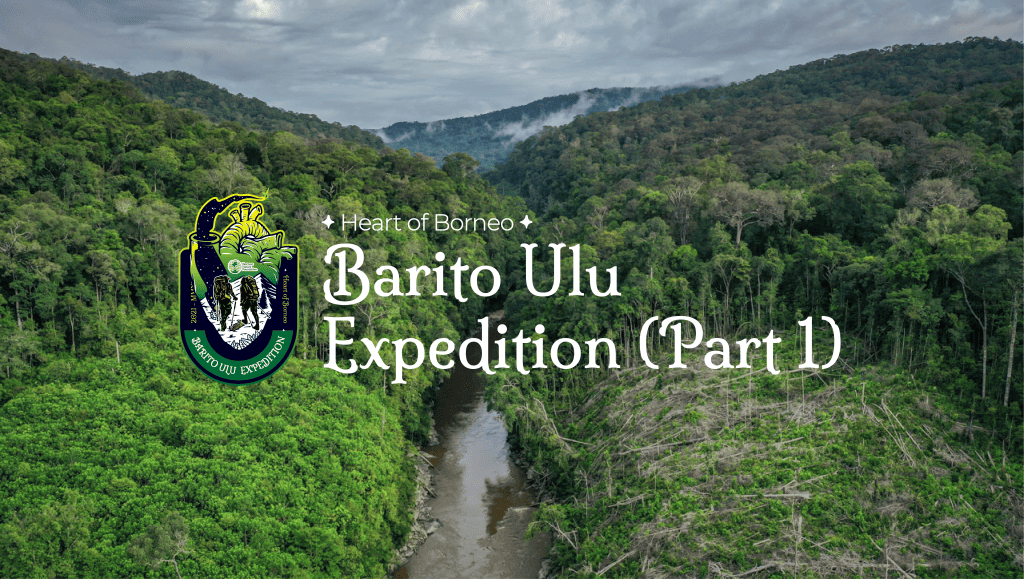 Spanning an area of ​​220,000 square kilometers, located in three countries, and lying in the middle of the island of Kalimantan, the Heart of Borneo forest tells the story of remaining hope. In the pace of changing times that are never friendly to nature, this forest still stands upright, giving ecological breath to the earth. Yes, this is Borneo’s last fortress.

In the midst of the wet season from April to early June 2021, the Borneo Nature Foundation (BNF) Team conducted an expedition to the Barito Ulu forest, in the Murung Raya Regency, Central Kalimantan, a piece of the jungle at the southern tip of the Heart of Borneo zone. Wanna hear the story of this expedition? Keep updated: for the next two weeks, a series of four articles will describe this incredible expedition experience by 8 BNF staff!

Following a ten-hour road trip with two cars from Palangka Raya City, we finally arrived in the evening in Puruk Cahu City, the capital of Murung Raya Regency, (14/04/2021). There is not much traffic on the main roads in this northernmost city of Central Kalimantan. In the stillness of the night, we went straight to Wisma BNF, a two-story building located on the outskirts of town to spend the night.

On the next morning, we went over the important coordination points together: prepare logistics, license, and coordinate with relevant forest area stakeholders. Indeed, this is the first BNF expedition in Barito Ulu, the Heart of Borneo, in a landscape that will become one of our research and conservation area.

The team got divided into two. The first team of three people (including myself) was led by the Deputy Director II of BNF, Agnes Ferisa. We had the mission of coordinating with the Murung Raya Environmental Service (DLH) and the local Forest Management Unit (KPH). Meanwhile, the second team prepared logistics and all expedition equipment needed.

After our visit to DLH and KPH offices, we were delighted to welcome two of their staff to the expedition: namely Rizki Muhammad, from DLH, and Wawan from KPH.

At 15:00, once the last preparatives were finished, the twelve of us left together for Muara Joloi Village, located on the outskirts of the Barito Ulu Forest, and also the entrance to our future research camp.

We arrived at 19.00 and spent the night at Muara Joloi after a journey on corporate roads with many elevations where we met several trucks transporting the felled logs belonging to the companies.

In Muara Joloi, we stopped at a little food stall, enjoying a chat with the local residents. One of them was named Solihin, who explained to us a plan to build a hydroelectric power plant in the Rekut River in 2022, around the Riam Lampei Awei area. Several hydropower survey teams have also checked the location.

“Many residents are actually a lil bit worrying about the hydropower (build) because the position of Joloi Village is lower than the hydropower development position,” said Solihin.

For years, the people of Joloi have lived in peace and tranquility with the jungle behind their house. But the news about the hydropower plant construction arrived, raising concerns within the local communities. The Barito Ulu forest area, like the Heart of Borneo forest area in general, has an important and strategic function for the surrounding area. With dense forest cover and relatively high landscape, this area represents a water tower, home for a large biodiversity, with high carbon storage, and inseparable socio-cultural relations with the surrounding community.

left Solihin’s food stall to rest at one of the residents’ houses in Joloi. The nights are quiet in this village right on the edge of the jungle in the Heart of Borneo. Almost no activity and movement of residents can be seen after 09.00 PM: only the distant voices from the forest break though the stillness of the night.

In the morning, the Team got ready to leave for Camp Rekut, where we will build a semi-permanent shelter for temporary living while carrying out research activities and forest biodiversity monitoring during the expeditions. To facilitate the trip, we first coordinated with the Acting Head of Joloi Village, Jose, and the District Head of Seribu Riam Roy Cahyadi.

The journey to Camp Rekut passes through two cascades or « riam », namely Riam Ahas and Riam Lampei Awei. Riam is part of a river with a swift flow of water, almost like a waterfall but low and sloping. In contrasts with the lowland peat forests in the South of Kalimantan, the forest topography in Barito Ulu tends to be hilly and steep, generating this fast river flow.

Barito Ulu is one of the largest rainforests in the Heart of Borneo. Our expedition team discovered this incredible topography: from valleys, hills, to the Schwaner and Muller mountains that form the spine of the island of Borneo. Barito Ulu is also the home of the Dayak people who depend on the forest for their food, medicine, shelter and customs.

Going through the rushing cascade, the Team boarded a motorized boat against the stream. However, about half way, upon arrival at Riam Lampei Awei, the real adventure started when the speed of the boat began to slow down. Too much weight on the boat which couldn’t sail anymore on the wild stream. For safety reasons, the Expedition Team decided to walk on the edge of the cascade, while Subuhan, our BNF motorist, drove the empty boat through this difficult part of the river.

The journey from Joloi to Camp Rekut took two hours, and we arrived at dusk. The silence of the forest crept into our minds. Every now and then the shrill of a bird and the whisper of a forest mammal could be heard from behind the thick, towering trees. The fresh air of the forest combined with the warmth of the twilight sun created a quiet, nostalgic feeling.

However, the Expedition Team did not linger in the enigmatic atmosphere for long. After a short rest, we rushed building a temporary camp out of wood and tarpaulin before dark. We hunt with time, especially in the middle of the wet season. Spending the night under the rain and the cold without a shelter is certainly not a pleasant choice, right?

So the whole team worked together to prepare the camp: some were building our camp, and some other were cooking. Finally, in less than two hours, the camp was successfully established thanks to our determined team work!

After resting for a while and cleaning up, the Team held an evening meeting, discussing plans for the next day, namely exploring the forest, installing monitoring cameras, greeting nature, as well as revealing a few secrets of the unspoiled forest in Borneo. Are you wondering what kind of secret? Check out the second part to know about our incredible adventure in the Heart of Borneo. (Continued)