This week, as part of our Species Series and for International Orangutan Day 2015 celebrations, we bring you the charismatic orangutan.

The word orangutan comes from two Malaysian words: ‘orang’ (which means man) and ‘hutan’ (which means forest). When these two words are put together – orang-hutan, it literally means ‘man of the forest’. They are so-called because of their intelligence and their similarities with humans. The Bornean orangutan is one of only two species of orangutan, the other being the Sumatran orangutan.

These apes are one of the largest arboreal primates and the way that they move through the canopy is extraordinary. They use their body weight to bend the trees, in the direction they wish to travel, arriving at the next tree on their route. This type of travelling is called 'tree sway' and can only be utilised properly by orangutans because of their large size. It is one of the most impressive sights in the forest and is very endearing to watch.

Orangutans carry out another interesting behaviour when they go to sleep – they make nests! Nesting occurs in some other ape species, such as the gorilla, but orangutans make the most comprehensive nests in the trees. The nests are made with branches that are bent to form a platform on which they sleep. These nests are very sturdy and can remain in the canopy for up to a year. For this reason, counting nests provides the best method for determining the number of orangutans in an area. We used this method when we discovered that the Sabangau Forest is home to the world's largest population of orangutans!

OuTrop was originally founded in 1999 for the research and conservation of the orangutans of Sabangau. They are still a very important part of OuTrop’s research programme and all data that are collected contributes to our understanding of the behaviour and behavioural ecology of these red apes.

Join us next week for the bearded pig! 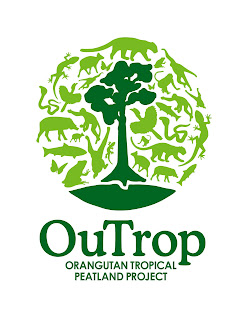