Gibbons are a family of apes that live in tropical and sub-tropical forests in South-East Asia, Northwest India and Bangladesh. Although there are many differences between the species in the family, they also have many things in common. For example, all gibbons have a specialised anatomy that means that they can swing through the forest using a form of movement called brachiation. This allows them to move quickly through the trees without ever having to come down to the forest floor. It also means that following them in the wild, as the OuTrop researchers do, is a tough job because they can move much faster in the trees than we can on the ground!
Although they are fast, gibbons are very easy to find because they have very loud voices! The great call of the female southern Borneo gibbon (Hylobates alibibarbis), found in Sabangau, can be heard as far as 1km away! They are the alarm clocks of the forest, calling in the mornings to defend their territories, strengthen the bond between the male and female of the group, and for social development. Each species of gibbon has a different type of call and the infants learn the call from their parents by listening and imitating.
Gibbons are primarily frugivores and are important seed disperses. This means that they are very important for the health of the forest. The southern Borneo gibbon is listed as ‘Endangered’ on the IUCN Red List. However, the OuTrop research is helping to inform conservation practices that can be used to ensure that this charismatic species can continue to swing around the forest!
2015 is the Year of the Gibbon and OuTrop is also celebrating 10 years of gibbon research this year so you can expect to hear lots more about them in the coming months! 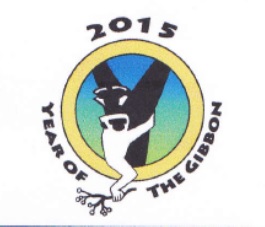