OuTrop’s Managing Director, Dr Mark Harrison, was lucky enough to recently see a titan arum flower in bloom. A spectacular sight and fascinating species – Mark explains more here.
The titan arum (Amorphophallus titanum) is otherwise known as the carrion or corpse flower (bunga bangkai in Bahasa Indonesia). While any ecologist working in Indonesia will have heard of this amazing flower, few will have been lucky enough to see it in full bloom. And what a bloom it is! 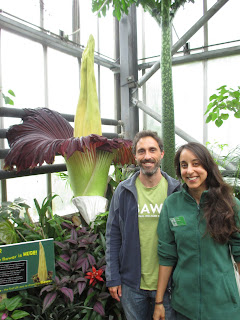 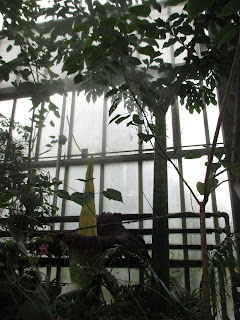 Left: Mark standing by the flower (taller than him!). Right: The flower and, to the right, a ~5 m high “leaf” resulting from a previous inflorescence.
Titan arum’s flower is one of the most impressive anywhere, with its inflorescence reaching up to around 3 m high. The flower is famed for its stench of rotting flesh, though fortunately when I visited the smell had mostly waned!
While spectacular and a real “tick-list” item for ecologists working in the region, the bloom is rarely seen. This is because of the plant’s restricted distribution (this particular species is only found in Sumatra, though related species are found in parts of Borneo), its general rarity (it is classified as Vulnerable by the IUCN) and the fact that blooms only occur maybe once every ten years, staying open for only a couple of days.
Paignton Zoo’s Curator of Plants and Gardens, Giles Palmer, said: “There are probably only 100 collections in the world where you can see this plant and it can go years between flowerings, so it’s not a common sight. Sadly, they are becoming rare in the wild as people collect the seeds for profit – habitat destruction is also a major problem”.
Like most, I’d therefore heard a lot about the flower, but never seen it, so I was really lucky when I was able to see this flower in bloom recently at Paignton Zoo. Incredibly, another titan arum plant is also due to flower in the Royal Botanical Garden at Edinburgh, so a mad pollen-collecting dash is planned by the zoo!
An incredible site that highlights just how amazing Indonesia’s biodiversity is. Check out the full opening of the flower in the BBC News video clip.